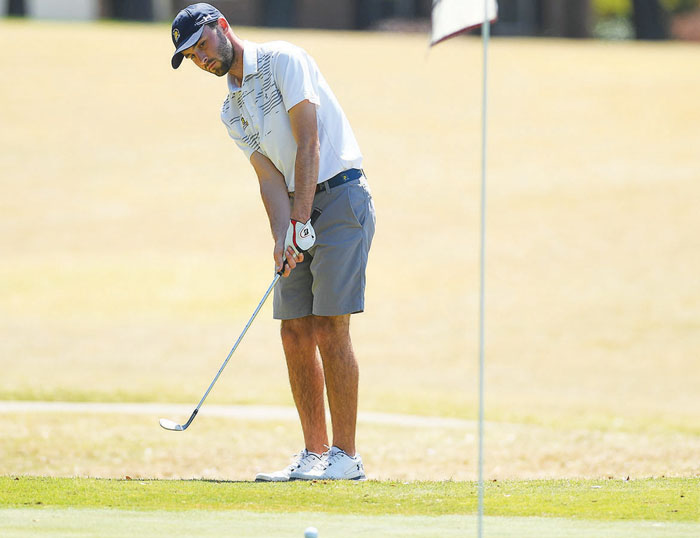 PARAMUS, N.J. — Nick Lyerly’s Wednesday in the 122nd U.S. Amateur was over after one hole.

Lyerly was in a 15-man early morning playoff for the last 11 spots to advance to match play.

Lyerly flushed an 8-iron off the tee and found a bunker short of the green. He blasted out of the trap on his second shot and left himself an 8-foot putt for par.

His putt swirled around the cup and lipped out, and that bogey eliminated him. One of the 15 golfers birdied the hole, while 10 advanced with pars.

The 122nd U.S. Amateur  is being played on two New Jersey courses.

Lyerly, a former East Rowan and current UNC Greensboro standout, looked like he would have a short stay in the tournament after shooting a 5-over 76 on Monday, a round that included one birdie and a double bogey.

But he came back strong with an even-par 70 on Tuesday, on a tough day to score. He overcame another double bogey with the help of three birdies.

Lyerly’s 76-70 scorecard after stroke play put him in a tie for 54th and in that Wednesday playoff.

Sixty-four golfers advanced to match play, which began on Wednesday shortly after the playoff, with 248 in the elite field of 312 — double the size of a normal PGA field — heading for home.

The U.S. Amateur process began with 7, 749 elite golfers attempting to qualify through two rounds of stroke play at 94 sites. Lyerly qualified at Camden, S.C., where his effort included an opening-round 61.

Lyerly still has a year of eligibility at UNC Greensboro, where he is finishing work on a master’s degree.