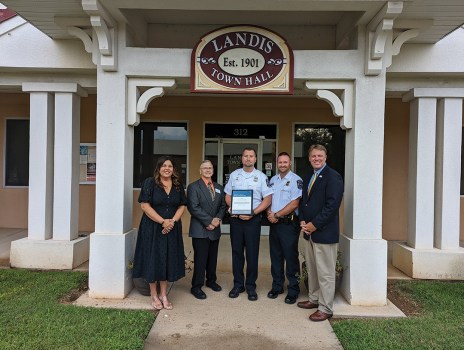 LANDIS — At the Town of Landis’ Board of Aldermen meeting Monday, the Landis Police Department was awarded with an honor by the N.C. League of Municipalities for adhering to the industry’s best practices when it comes to public safety.

In March, Landis Fire Department also received an award after a 15-month risk review process by the organization. Having successfully completed two of the public safety site evaluations, Landis is the second municipality in North Carolina to have received the honor. The town is the first to have completed the fire department risk review process.

“It’s a great accomplishment,” shared Mayor Meredith Smith. “When they come in and do an analysis of our departments and policies, it’s a great deal that they’ve received this honor.”

To receive the Law Enforcement Risk Review award, the NCLM visited Landis and inspected the police department inside and out. This includes reviewing policies, procedures, operations, facilities, equipment, vehicles and high liability areas to ensure the organization is meeting the best law enforcement practices.

He also said that municipalities that get its workers compensation and property/liability coverage can receive reduced premium costs from 14-20% for having completed the process with the league.

The law enforcement review is a peer review process by standards established by a group of police chiefs across the state for the league’s program.

“Our staff in both the police and fire department worked hard to update policies, procedures and work to meet the needs of the agency to be successful,” said Lechette. “it’s pretty exciting to be able to do that.”

The risk reviews offered by the NCLM is an optional enrollment that must be requested by a town or city. Lechette said that Landis reaching out for an audit of its agencies shows the commitment that the town has to show transparency and a want to constantly improve.

After the analysis, the Landis Police Department was recognized for its current policies and procedures in place regarding high liability areas such as uses of force, pursuit and investigation processes.

A suggestion the organization received concerned the hiring process, where it was recommended that a psychological evaluation be given to every incoming, hired police officers. The N.C. Criminal Justice Education and Training Standards Commission requires an evaluation to be given prior to an initial certification of a police officer as it is required of a recruit or cadet hired out of Basic Law Enforcement Training for the first time.

While it is not required by the State for lateral transfers to be reevaluated, the Landis Police Department amended that no matter the experience of the officer, they will always perform a psychological evaluation to treat everyone fairly and consistently throughout the hiring process.