SALISBURY — South Rowan’s Eli Julian was recognized as the county’s top male runner in cross country and track and field for the 2021-22 school year and enters a new cross country season with lofty goals and an eye on breaking all-time records.

Julian ran a strong 16:26 right out of the gate on Tuesday evening in the Rowan County Pre-County Meet held at Dan Nicholas Park.

Julian won by more than a minute. Most of the suspense was generated by a tight race for second place.

Julian’s effort led South to a 30-34 victory over Carson, and the Raiders and Cougars may battle like that all season. 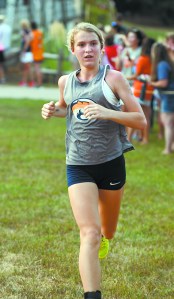 Carson’s Emily Landaverde finished fourth in 23:27. The other scorers for the Cougars were Hayley Borst (12th), Mackenzie Todd (13th) and Kinsley Fowler (18th).

Madison Beaver’s third-place effort (23:11) led the Raiders. Sadie Featherstone (23:33) placed fifth and was the top runner for the Mustangs.