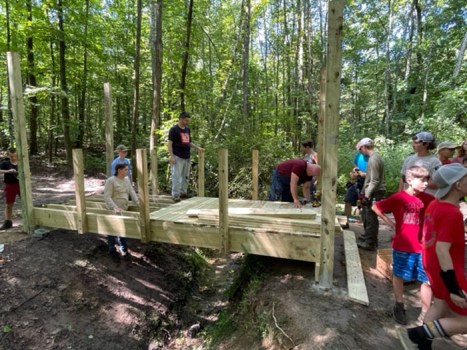 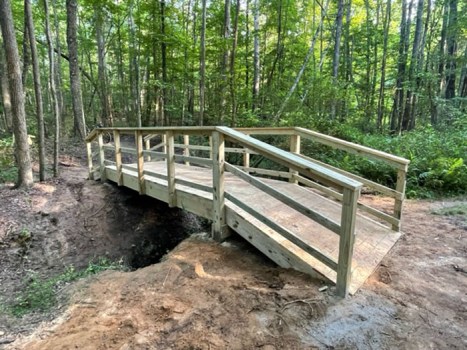 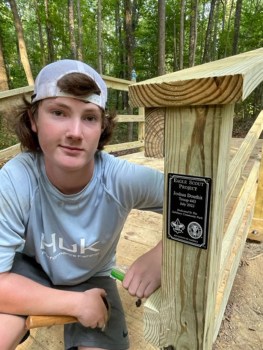 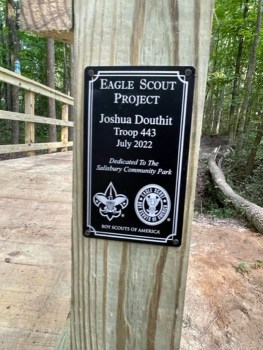 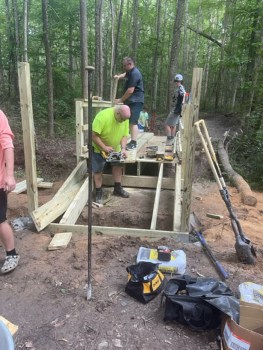 About 150 work hours went into the project at Salisbury Community Park. Submitted photo 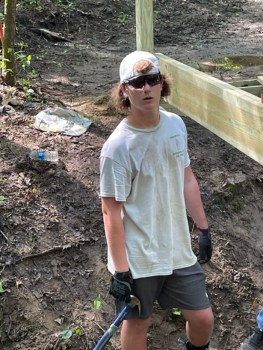 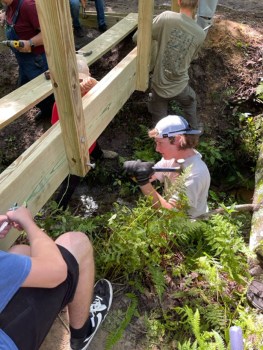 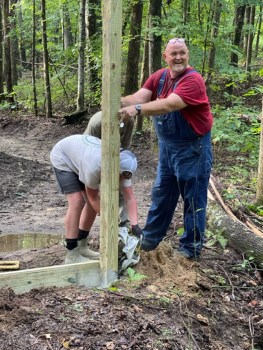 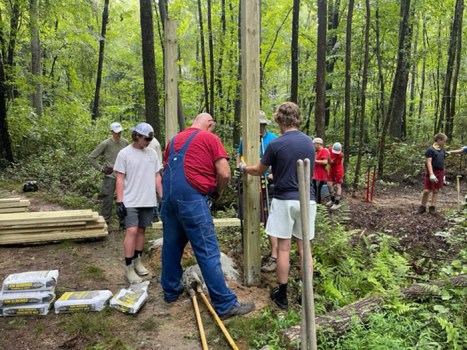 Posts go in for the bridge at Salisbury Community Park. Submitted photo

SALISBURY — Josh Douthit is nearing the pinnacle of his Scouting career. But before he does, he had to complete a project required of all Scouts to reach the rank of Eagle. So he decided to work on something that won’t soon fade away but will be around so he and others can enjoy it now and for years to come.

Douthit started as a Cub Scout with Pack 306 in 2013 while he was a student at North Hills Christian School. He joined the Boy Scouts and Troop 443 at St. John’s Lutheran Church in March of 2019, and for his Eagle Scout project he decided to build a bridge on a hiking/biking trail at the Salisbury Community Park. It will replace a path that has been eroding away while connecting two trails.

Josh raised the $2,000 needed for the bridge by handing out flyers in his neighborhood and using social media. He planned out the project that ended up involving about 30 other volunteers who started working on July 30.

His dad, Sean, helped with the effort and said, “We were hoping to get it completed in one day.”

They needed a few more pieces of lumber, so they added a few workdays at the first of the month and got it completed Aug. 4, with at least 150 hours from all involved going into the building process. Josh got the green light from park officials later that all was clear.

One reason he decided to take on the project was it was something he could come back in a few years and be able to point to the bridge and say he did that.

“We’ve seen multiple other Eagle projects, but they aren’t going to be there after so many years,” Josh said. “Everything came together perfectly.”

His should be around for a long time to come. But more importantly he wanted to do it because it benefits the community and will come into use for him as well. He is a member of the Rowan Rockhounds mountain bike team that regularly uses the trails at the park for practice as well as for races. So that got him more excited to complete the project. He said he’s practiced with the Rockhounds and raced one full season for the team.

Josh, 14, played baseball for the Rowan Railcats and at North Rowan Middle School, where he also made the honor roll. He will be a rising freshman at Davie County High School. His mom, Jamie, and 11-year-old brother Lucas (also in Troop 443) and sister, Madison Welborn, 20, all live in Salisbury, but near Mocksville.

Now that he has everything complete to receive his Eagle, he just needs all the paperwork to be wrapped up and to meet one last time with the Eagle review board before the honor is presented.