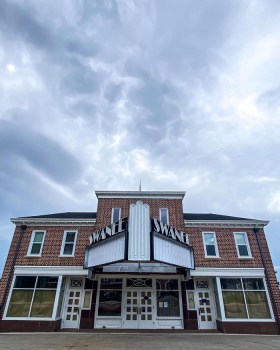 The new marquee is up on the Swanee Theatre in Kannapolis. Submitted photo 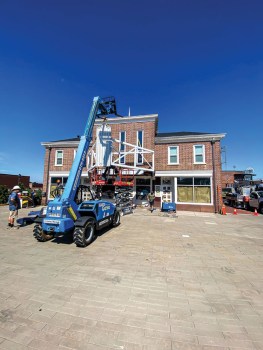 Workers put up the new marquee on the Swanee Theatre in Kannapolis. Submitted photo

KANNAPOLIS — The Swanee Theatre, built in 1940 as one of four movie theaters in Kannapolis, is well on its way to a new life as an entertainment venue, but the name remains the same.

This week, new owners at West Avenue Entertainment, LLC saw the new marquee, with the original name, go into place.

The Swanee Theatre, originally a single screen movie theater, was one of the first in the area to play R-rated movies, according to the facility’s history. The theater offered “women’s only” and “gentlemen’s only” movie times, and ticket prices were targeted at families, meaning they were affordable even for families living on one income and raising children.

The theater remained open as a movie theater until 1971, and over the years has been a visitor center, and a workforce training center for Rowan-Cabarrus Community College before falling vacant for several years.

The theater was initially purchased by the city of Kannapolis as part of its downtown revitalization program in 2015, then in 2021, the city sold it to West Avenue Entertainment, which plans to reopen the facility as a musical performance and special event venue.

According to Macy Burleyson, wedding planner and event coordinator for the new venue, the theater was “completely gutted, then rebuilt” with as many nods to its history as possible. She noted that the building can house 600 people at a standing-room-only event, such as a concert, 400 at a seated event without tables, and 300 for a seated event such as a wedding where tables would be needed.

Nov. 1 is the official opening date, which she notes will include an open house, music, and the public will be invited in.

“We know a lot of people remember coming to see movies here when they were children, or when they were younger,” she said. “A lot of the local businesses in the area were incredibly supportive when the theater first opened, and we hope to build that relationship again.”

The venue will have its first private event Sept. 7. The N.C. Visitor’s Bureau is inviting guests to Kannapolis to experience a number of activities and venues, and the day will include a dinner at the Swanee Theatre.