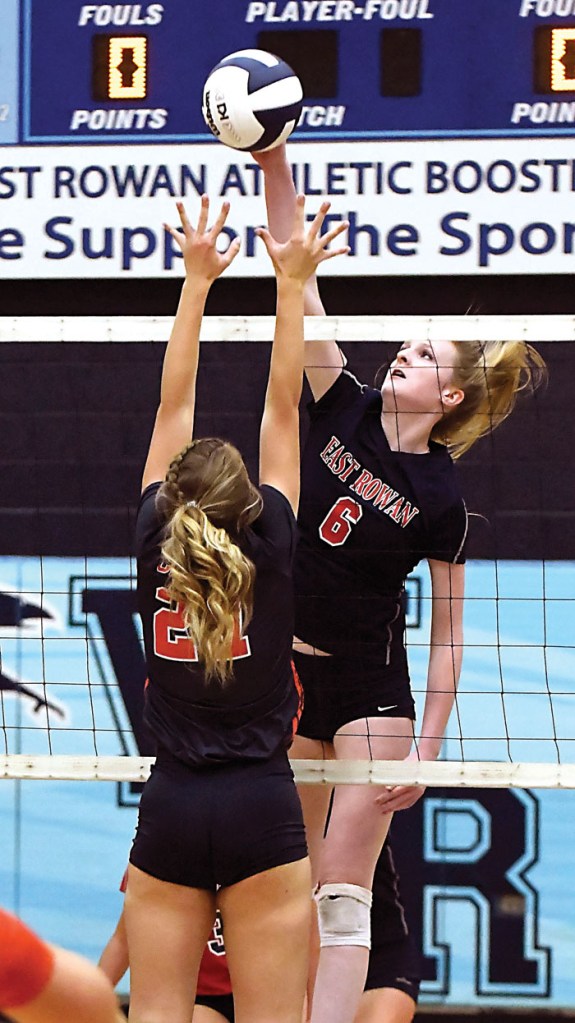 East Rowan's Leah Hinceman (6) will be a key for the Cougars this season. File photo by Wayne Hinshaw

First in a series of reports on local volleyball teams …

GRANITE QUARRY — East Rowan’s last winning season in volleyball was in the fall of 2015, but the 2022 Mustangs have a great chance to do something about that.

The two lethal hitters — Leah Hinceman and Anasty Faavesi —  are back. The Mustangs also have an outstanding libero in Catawba commit Riley Hill.

“We are excited and we’ve had a very good preseason,” East head coach Sandy Lytton said. “But we can’t take anything for granted and we’re not so good we can take any team lightly. We have to keep working and playing as a team.”

If Lytton sounds cautious, it’s because she always is.

She’d feel better about things if her daughter, Carrie Jo Lytton, hadn’t needed surgery to repair a torn ACL. She was the primary setter, and without an accurate set, a 6-foot-1 hitter may as well be 5-foot-1.

“Carrie Jo is four months removed now from ACL surgery,” the coach explained. “We’re hoping we can get her back in October. She’s been able to do some things in practice, and we’re hoping she won’t miss all of her senior season.”

East  has gotten a boost from the return to the program of senior Hallie Cox, who has overcome some sickness. She’s a setter, which is exactly what the Mustangs needed most.  Junior Jaeley Legg has done some setting, and East plans to keep freshman Jacee Eudy, a setter with a bright future, on the varsity.

If the set is efficient, the Mustangs have an excellent chance to put it down for kills.

Hinceman, 6-foot-1, is  a potentially dominant outside hitter who competes on high-level club teams. As a junior she had 322 kills — 4 kills per set. She also had 309 digs, so she got it done defensively, as well. She’s added some control to her game each season, and she has the bounce to play above the net. She’s one of the county’s best. She’s still uncommitted as far as college.

Faavesi isn’t unusually tall at 5-foot-8, but she is mobile and springy and has drawn interest from college coaches. She was second on the team in kills and third in digs. She’s also the Mustangs’ toughest server. She had 45 aces.

Sophomores Caroline Snow and Cameron Ostle played quite a bit on the varsity as freshmen. Ostle was third on the team in kills per set.

Peyton Whicker or 5-foot-9 Dani Steelman usually took care of the middle for the Mustangs. They combined for 47 blocks.

Whicker is an athlete and also gives East quality performances in basketball and track and field. She’s undersized for the middle, but she’s explosive.

Tall freshman Alli Corl will be on the varsity and will give the Mustangs another hitting option.

Hill has been anchoring the back row defense since she was a freshman.She had 367 digs as a junior. She rarely messes up on a routine dig and once or twice a night she does something spectacular.

Liberty Schroeder will help as a back-row defender. Emma Schumacher will help on the front row.

East won 10 matches last fall, the most wins the program has had in a while.

East placed fifth in the eight-team SPC last fall by handling Concord, Northwest Cabarrus and Central Cabarrus. To move up from fifth this season, East has to beat some of its Rowan rivals. That’s not easy to do. Carson has a ton of volleyball tradition, while South Rowan and West Rowan have had some of the best teams in school history in recent years.

East was 0-7 against the Rowan schools last season — concluding things with a tournament loss to Carson.

Lake Norman Charter is always going to be good in volleyball, so that’s two more tough matches for East.

“We’ve got good numbers back in the program now, varsity and jayvee,” Lytton said. “We’re competing well in practice, and we hope to upset some people.”