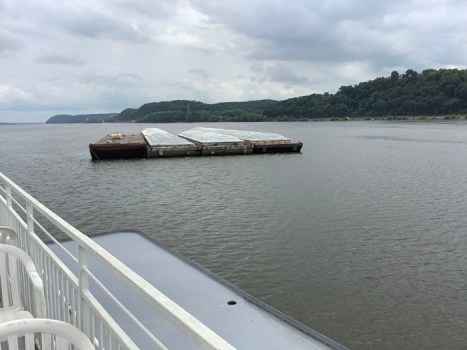 David Freeze didn’t see much of the Mississippi River on this day of biking although he was close at times. These are barges anchored near Hannibal and ready for a tugboat to move them along. David Freeze photo 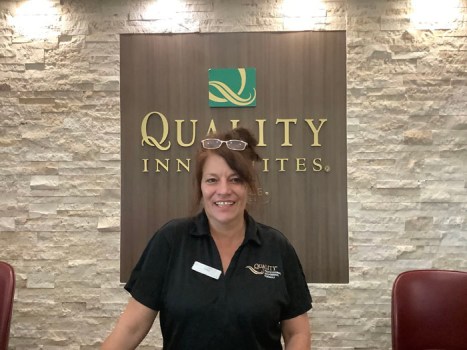 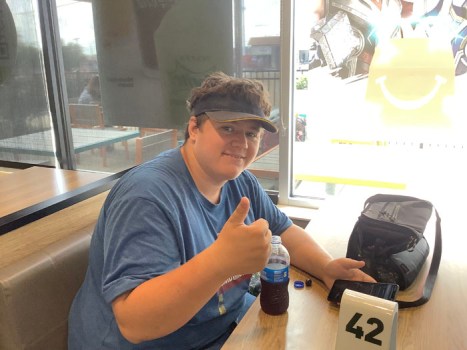 Jerry, who is from St. Peter’s, a suburb of St. Louis, was in a McDonald’s and was interested in David Freeze’s trip. He talked about his own weight loss plan. David Freeze photo

Today was going to be a big question mark from the start. I love to study maps, real maps where you can see everything around as possibilities. Last night, I decided to follow US 79 as far it would go into the St. Louis area. Then I picked out a route, not knowing for sure where the bike could go. I had the Missouri map I am using to follow the less detailed Great River Road and the St. Louis area city map. It seems like at least a dozen suburbs make up the city.

This morning I left out of Elsberry as the town was waking up. Another cool morning helped on the endless hills. Much of the time, I had no shoulder or a very poor one. A sign said US 79 would be repaved this fall. I had to ride in traffic and this was quite spooky at times.

I passed through Foley and didn’t know when I did. But they did have a stop sign for no reason and a Dollar General. Then on to Winfield, a little bigger with a couple convenience stores. And finally Old Monroe which had little to offer except a better road. Good thing because the traffic was heavy as we neared the greater St. Louis area.

I stopped at St. Peter’s and talked to Jerry at McDonald’s about this ride and the others while he was concerned about eating so much fast food and brought his lunch for the day. I followed my planned path and jumped on 364, not sure whether it’s more than a county road but it serves as an expressway across much of the city area. Simply put, I raced along on a good shoulder paying special attention to all the exit and entry ramps. The roar of the traffic was tremendous at times and almost overwhelming.

By following 364, I was able to intersect with US 67, which led to a junction with US 61 which I will follow again for a couple days on the Great River Road. Briefly we also intersected with the Lewis and Clark route. Away from 364, the city is tremendously hilly.

While all of this describes my day through mid-afternoon, it gets much better. I had made no plans for a room for the evening and made a call to a motel perfectly situated on my planned route. They were full, which left the only option as the higher priced chains. After the runaround at two of those places, I called the desk at the Quality Inn in Arnold, the second best situated motel. Tina gave me a great deal on a first class room and all I had to do was get there.

Not sure if I could ride on the interstate highway in Missouri, Tina gave me a route that would avoid it. I got Siri involved and again she failed me by sending me on a longer route. I threw caution to the wind and pedaled right on to the I-55 ramp and on the highway. Up to 6 lanes of traffic was flying and so was I, in the breakdown lane. With my history of being stopped by officers over the years, I expected the same thing again.

With just 4.5 miles to ride to get to the Quality Inn, I thought someone will have to hurry to stop me. I came flying down a hill and a police car was sitting on the side of the road with the door open. Turns out he wasn’t waiting for me but had what looked like sobriety problems with a driver. The officer never looked at me.

My ride ended at a fantastic motel, surrounded by almost every chain store I ever enter. I stopped at Walgreens and got a fantastic meal at Waffle House. I may go to Target later. Bottom line, I did spot two smaller rivers today but not the Mississippi. There will be at least two more full days in Missouri, with Cape Girardeau the next main target. That is probably the next real sighting of the river.

The day was perfect, about 80 degrees, a slight tailwind and 71 miles. I honestly felt exhilarated by the whole day! Join me tomorrow for a further journey south on US 61. I hope I get situated in time for tomorrow’s Field of Dreams game, and that you join me again tomorrow right back here!