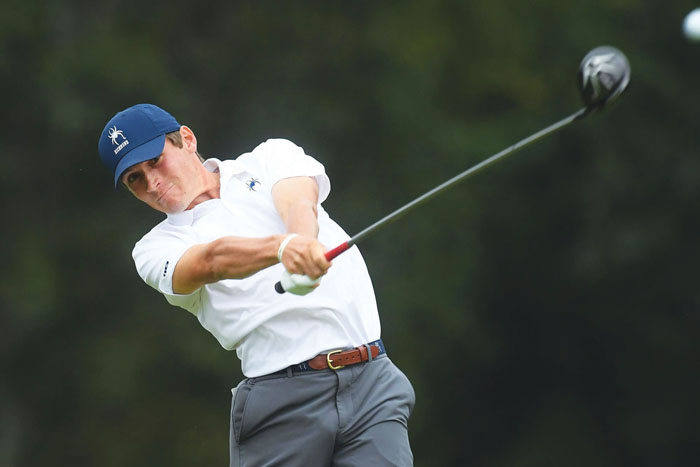 WILMINGTON — Richmond University golfer Michael Childress is as articulate any college athlete on the planet, but he describes his summer in one word.

“It’s the first summer of my life that I didn’t spend in Salisbury,” Childress explained.

Childress is good enough at golf that he’s shot 62 at the Country Club of Salisbury. In a competitive college round for the Richmond Spiders, he’s played a blistering, 11-hole stretch in 9-under.

He loves golf and loves competing in golf, but he’s more than a golfer.

“I really enjoyed it,” Childress said. “A lot of people were surprised to be getting a call from a student-athlete rather than from someone in the athletic department, but they were receptive. I enjoyed selling Richmond because it’s something I strongly believe in. It’s been great for me.”

Childress grew up in Salisbury and starred in golf at Concord’s Cannon School where he played on two state-championship teams. As a youthful phenom, he teamed with Charlie Graeber to win the 2014 Labor Day Four-Ball championship. He also proved to be a community asset off the course, raising $12,000 for Rowan Helping Ministries.

As expected, he made an impact on Richmond’s golf program as a freshman back in the fall of 2018 and the spring of 2019. He shot a 68 in competition and averaged a bit under 75.

As a sophomore, he beat par five times, averaged 74, and was Richmond’s top golfer. But COVID interrupted. Childress and his teammates were sent home to continue their educations online.

That dismal time period changed Childress’ perspective on golf, made him appreciate the game even more. It was the first time he hadn’t been able to play when he wanted to play.

In time, he turned that bleak COVID spring into an asset.

The universal COVID redshirt for athletes meant he’d get an additional year for golf, so he ambitiously tacked on a second academic major. In addition to a business administration degree, he’ll earn a degree in leadership studies.

“At first, college academics were stressful, but once I made the necessary time-management adjustments, I was able to deal with it,” Childress said. “I was always able to stay about a semester ahead in my classes, so I was able to add that second major. I only needed about eight more classes to do it.”

In the 2021-22 season, he posted a career-best 73.77 stroke average with four top-20 finishes. He made a hole-in-one in competition against rival VCU. He moved into Richmond’s all-time top 10 for stroke average.

He also was named an Academic All-America for the third time. He’s the first Richmond golfer to accomplish that feat.

And now, due to the COVID year, he’s got the opportunity to play a fifth season of golf for the Spiders and will probably be a four-time All-America in the classroom.

“With the internship I had this summer, it was like I was out of school and already in the working world,” Childress said. “But now it’s like I get to go back to school and do it all over again. Not many people are lucky enough to get that chance.”

Childress’ final golf season for Richmond should be something to see. He might be playing the best golf of his life right now.

He had hit a golfing plateau for a while and was starting to feel some frustration, but Brian Lee, the pro at Warrior Golf Club, has helped him get to another level this summer.

“I asked my friend Nick Lyerly for advice and he told me to go see Brian Lee,” Childress said. “Brian has really made a big difference for me mentally. He’s got a great way of making things simple and he got rid of some of the clutter.  The difference in shooting a 74 and shooting a 71 is such a fine line, and I think Brian’s advice will turn 74s into 71s for me. He cares about you as a person. He’s driven to Pinehurst just to watch me play. When someone cares that much, it means a lot.”

With the internship, Childress hasn’t had a chance to play many casual rounds this summer, but he’s been able to tee it up in a handful of major tournaments.

In Camden, S.C., he made a strong run at qualifying for the U.S. Amateur.

“I played four rounds in the Carolinas Amateur in Charlotte (11 birdies, tied for 33rd), then drove to Camden for U.S. Amateur qualifying the next day,” Childress said. “It was a stacked field, about 15 of the top college guys and some of the best young players in the country, and only three were going to qualify. I thought I played pretty well the first round, shot 69, and then I find the leaderboard and see that Nick (Lyerly) has shot a 61. I still had a decent chance on the second day. I almost did it, but I think fatigue set in.”

Childress shot 67 on that second day — with an eagle — but came up just short. It’s the second straight year he’s narrowly missed on the U.S. Amateur. He had putts lip out on 17 and 18, but he moves on.

He’s playing this week in the North Carolina Match Play Tournament in Wilmington.

That will be his final summer tournament, but he’s got that fifth year at Richmond to look forward to, and he likes where his head and his swing are.

“It’s the best I’ve felt about my game in a long time,” Childress said.