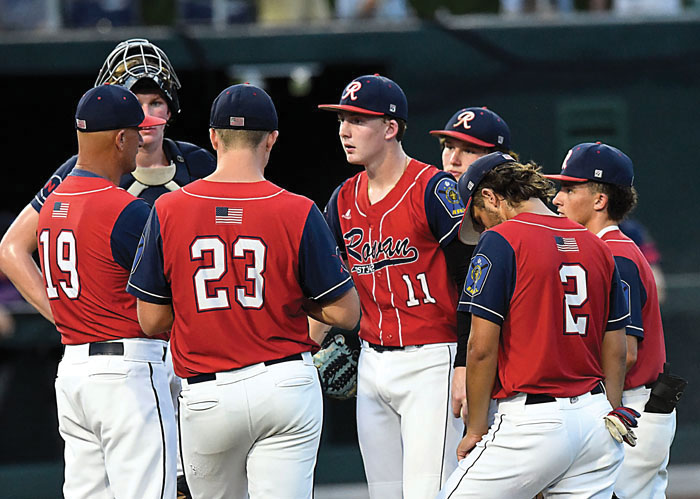 Coach Jim Gantt, left, meets with his players on the mound during a game earlier this season. Rowan loss 4-1 to Queen City on Thursday, ending its season. photo by Wayne Hinshaw, for the Salisbury Post

BUIES CREEK — It didn’t go well at all for Rowan County’s American Legion baseball team on a hot Thursday in a 4-1 season-ending loss to Queen City in pool play in the state tournament.

Rowan County and Pitt County went 1-2 at Jim Perry Stadium, while Wilmington and Queen City advanced to the semifinals with 2-1 records.

Despite an exciting comeback victory against Wilmington on Day 2, Rowan was never fully able to recover from the devastating, 11-inning loss to Pitt County on Day 1.

Some of Rowan’s wounds in the finale were self-inflicted, although Queen City’s efficient southpaw Joey Ruller caused most of the problems with a steady barrage of quality strikes. You don’t see many high-80s throwers on Legion mounds these days, and Ruller was outstanding. He nearly threw a no-hitter.

Rowan gift-wrapped the run that gave Queen City the lead for good in the third inning, but Queen City (22-8) earned the win. Known as the Mustangs, they fielded it cleaner, hit it harder, and pitched it sharper than Rowan.

Rowan (35-10) was undermanned and understaffed all season, but made it a remarkably long way, a testament to the coaching staff and to hard-working players who improved.

On the first day of practice, when he looked around, head coach Jim Gantt probably would’ve been happy to go 20-20.

Rowan had two of the county’s top 10 pitchers from the 2022 high school season, but Jake Blevins and Casey Gouge carried a heavy load. They combined for 17 wins.

Zach McNeely and Blake Hill didn’t play much during the high school season, but they became fixtures in the Rowan Legion lineup. Hill batted cleanup, which tells you all you need to know about an over-achieving bunch. He led the team with 45 RBIs. He created a surprise run with his legs on Thursday that was taken off the board. That proved to be the turning point in the game.

McNeely’s versatility — left field, right field, shortstop or second base — turned out to be huge. His ability to move around mid-game allowed Rowan to use a lot of position players as part of a patchwork pitching staff.

And then there was McCall Henderson. He played jayvee in the high school season. He proved to be a very good DH. He was one of Rowan’s most consistent hitters.

It was a different sort of Rowan team, with a guy from North Iredell (Cole Johnson) playing shortstop and a South Rowan graduate from Methodist University (Jackson Deal) playing center field.

But in the end, it was a good team.

Among other things, this team extended Rowan’s streak of winning at least one game in all 13 single-site state tournaments for which Rowan has qualified. This was only the third time that Rowan has won only one game.

As far as Thursday’s game, Ruller was most of the story.

Things headed downhill for Rowan in the top of the second.

Hill walked and stole second. On ball four to Gouge, Hill surprised Queen City with a steal of third and Rowan had a golden chance to score first.

But Cameron Burleyson’s fly ball wasn’t deep enough for Hill to score. Henderson’s flyball, on the other hand, was plenty deep enough. Hill beat a strong throw home, but he was ruled out after Queen City appealed. He was deemed to have left the bag early. Gantt argued. Assistant coach Seth Graham argued. Their pleas fell on deaf ears. It was still 0-0.

Catcher Matthew Connolly pitched for Rowan. He got some tough hitters out in the first and second, but Rowan unraveled defensively in the third. After a flurry of miscues, Queen City led 1-0, and Connolly was replaced by Drew Burton.

In the top of the fourth, Deal appeared to beat out a grounder to short for Rowan’s first hit, but he was called out, and Ruller maintained a no-hitter.

Queen City made it 2-0 in the bottom of the fourth. Jayden Singleton smacked a double and scored on a sac fly.

In the fifth, Aidan Christmas sent a triple to the center-field wall. Another sac fly made it 3-0.

Burton got Rowan through five innings. Second baseman Luke Graham took the mound for the sixth and was greeted by Singleton’s towering homer for 4-0.

Ruller, who struck out eight, carried his no-hitter into the top of the seventh.

With one out, Rowan finally made a little noise. Rowan’s first and only hit wasn’t a cheap one. Gouge blasted a long triple and scored when a pitch got past the catcher.

But that was it for Rowan’s offense.

Ruller went 6 2/3 innings. Queen City turned to the bullpen for one strikeout, and another Rowan Legion season was in the books.