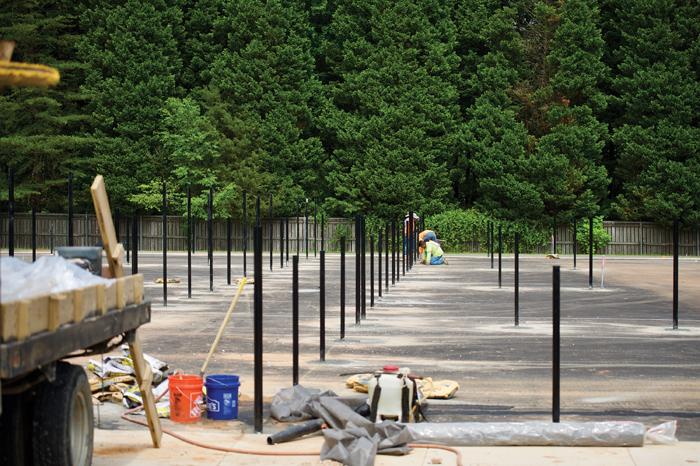 Carl Blankenship/Salisbury Post - Work on the court's fences was taking place on Monday. A second phase will install lighting and spectator seating.

SALISBURY — The Hurley YMCA is expecting to welcome a new set of pickleball courts into the world this month in an effort to meet the sport’s growing local demand.

The project is split into two phases. The first phase, the courts and fences, cost about $235,000, almost reaching the $250,000 price tag the Y first projected for both phases of the project.

The second phase, which will install lights and spectator seating, is expected to cost another $80,000 to $100,00. Reinholz said the expensive lighting portion of that phase will install 12 high-output LED poles.

Money for the project has largely been fundraised via private donors.

Reinholz said the Y could add a few more courts if demand keeps rising and the community seems to have an appetite for more.

He has run into the demand issue himself, saying the courts were full with people waiting to play the the Salisbury’s City Park on Saturday morning and there was little other activity.

The first phase was first projected to be ready in May, but now construction is expected to wrap up this month. The fences flanking the eight courts were going up on Monday. Reinholz said poorly timed rain could delay the project a bit more and the crew needs a couple days of clear weather to put material down.

There will be open viewing areas on the sides of the courts with fences backing the playing areas and a walkway down the middle. After the fences go up, the surface has to be finished, lined and netted. Landscaping is expected to wrap up this week.

The project will almost double the amount of courts at the Y. The main gym has permanent lines for nine courts, but that is not dedicated pickleball space.

The commitment to the sport goes beyond adding space for community members to play. The hope is to host tournaments at the Y courts and Reinholz said it is in the process of hiring an instructor to teach private lessons to people of all ages once the courts are open. The Y wants to host a mix of free and paid community clinics as well. The Y hosted an adaptive pickleball clinic for veterans in June.

The sport has seen underused tennis courts, like those at the park in Salisbury, get converted to accommodate local interest and other towns have pickleball in their sights as well. Granite Quarry’s new parks plan includes a recommendation to convert some of its own unused tennis courts to the sport.

Large sponsors are stepping into the sport and it is picking up broadcast interest. In April, table tennis equipment manufacturer JOOLA signed star player Ben Johns and launched its own pickleball line.

Reinholz credited some of the popularity to the accessibility. It is easier to learn than tennis, playable by people of different ages and abilities, uses less space, is inexpensive to get into and is a more social game. He said a decent paddle can be bought for about $50, will last about a year, and balls go for a few dollars apiece.

“I think as it gets introduced as a sport to our high schools and potentially could become a high school sport down the road, that’s going to be the trick,” Reinholz said.

Local woman who worked for grandfather of slain Japanese…