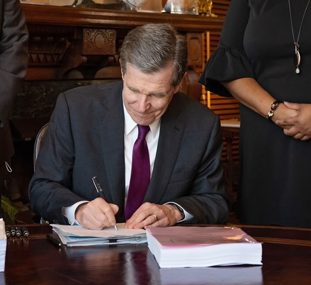 The signed bills were among more than three dozen that the General Assembly sent Cooper in the last two days of its work session, which ended Friday.

One signed measure makes clear that hospitals or medical offices can’t attempt to bill victims of sexual assault or their insurance companies for forensic medical examinations, leaving it to a special state fund that’s already been in place to cover the payment.

The bill, which also expands the number of criminal offenses for which a conviction requires a defendant to provide a DNA sample, came amid reports that dozens of medical facilities may have been sending such bills to insurance companies. The bill also raises the maximum amounts that the fund will pay the hospitals and medical offices to perform the exams.

“Victims of sexual assault deserve access to a rape kit without being further victimized by being charged for it,” Cooper said in a news release. “This new law will also strengthen the state’s DNA database used to catch criminals by including domestic violence and assault crimes.”

With another signed bill, patrons of North Carolina’s standalone bars no longer have to become paid members of the establishments first to get a drink.

State Alcoholic Beverage Control laws have for decades regulated what is commonly known as “private bars.”

But the designation meant the establishments’ owners had to charge a usually nominal fee so a potential patron could become a member and get beer, wine or a mixed drink. Operators complained that required them to check everyone coming through the door and keep membership lists.

Under the new rules, contained in a broader alcoholic beverage law approved by wide margins in the House and Senate, private bars will now be known in state law as bars that primarily sell alcoholic beverages and don’t serve prepared food.

Other measures signed Thursday also would:

• clarify the rules for recently created “social districts” and “common area entertainment permits,” in which customers of establishments that sell alcoholic beverages can take their drinks on the street or to shared seating areas and consume them.

•  allow judges to extend domestic violence protective orders temporarily should a hearing to renew the order be scheduled after the current order expires.

Cooper has until Sunday night or Monday night — depending on the bill — to act on the remaining measures on his desk, which include the legislature’s proposed adjustments to the state budget. A bill becomes law without his signature if he doesn’t sign or veto it by the deadline.