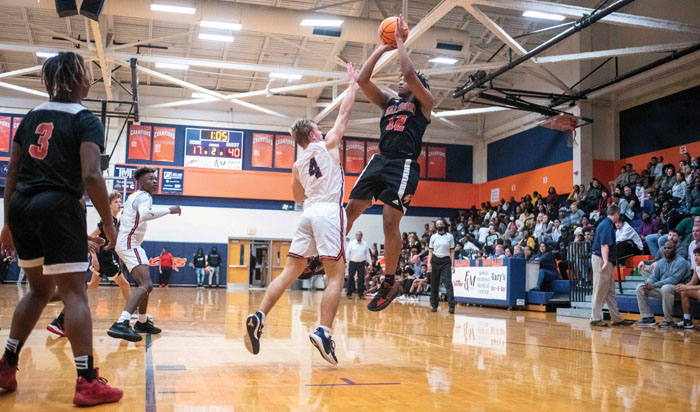 Salisbury’s Cameron Stout shoots over a Carson defender. Stout is headed to Pfeiffer next. JON C LAKEY / FOR THE SALISBURY POST FILE PHOTO

One of the best shooters Rowan County has produced in recent years, Stout finished with 979 career points, including 495 as a senior.

Stout basically came up one game short of the 1,000 milestone, as he averaged 19.8 points per game as a senior. It was a banner 2021-22 season in which he was recognized as Player of the Year for the Central Carolina Conference and for Rowan County.

Stout was promoted to the SHS varsity late in his freshman season. Over the next three seasons, the 6-foot-2 swingman missed out on at least 20 games due to a combination of COVID, injuries and cancellations.

The bottom line was he got to compete in only 68 varsity games, but he averaged 14.4 points whenever he took the floor for coach Bryan Withers.

Give Stout another 20 games and he gets another 300 points and becomes one of the legends of the program. Despite the limited schedule, he still finished 13th in scoring in the school’s proud boys basketball history.

COVID wiping out a summer and half of a season contributed to Stout being under-recruited.

He was making some noise on the AAU circuit back in April, boosting his stock every time he took the court, while averaging 16 points and 8 rebounds for E.A. Prep Stars.

Then his AAU season ended abruptly.

“I got hurt in a workout, trying to block a shot,” Stout said. “I dislocated my shoulder and needed surgery. During the high school season, most of the recruiting interest I was getting was from junior colleges, but I had several workouts scheduled for Division II programs before I got hurt.”

Pfeiffer offered him back in March. He committed in June. He should have a great opportunity to play early and often for the Division III Falcons, who do their hooping only 25 minutes from Salisbury.

Stout, who topped 20 points 13 times as a senior, could prove to be a steal.

Pfeiffer should be good for Stout. It’s close. It’s a school with a solid academic reputation. It’s a program that appreciates the 3-pointer, the segment of basketball where Stout excels most.

Stout shot 70-for-181 from the 3-point line as a senior. That’s almost 39 percent. That percentage is a result of taking good shots with good mechanics and with balance and pace. He didn’t rush many and he didn’t force many. He made as many as six 3-pointers in a game.

Coaches understand basketball math, which is why the 3-point shot has become so pivotal.

Stout can also finish closer to the rim. He connected on 52 percent of his 2-point attempts as a senior.

The really nice thing about Stout is he offers quite a bit more than the standard shooter who camps out at the 3-point line and doesn’t dent the stat sheet anywhere else.

Stout is pretty strong, pretty tough and pretty physical at 205 pounds. He’s willing to mix it up on the boards and he’s a much better rebounder than the average 6-foot-2 player. He had some double-doubles for the Hornets.

“I pride myself on doing everything in a basketball game,” Stout said. “It’s important to be an all-round player.”

Most high school players need to become better defenders in order to succeed in college, but Stout got good reviews for his defense last season from Withers as well as from opposing coaches.

He’ll develop his ball-handling and perimeter-defense skills as he transitions from mostly a forward role with the Hornets to mostly a shooting guard role in college.

Stout plans a sports management major. He was an A’s and B’s student at Salisbury, and there should be a degree as well as a lot of 3-pointers in historic Merner Gym in his future.

“I’ve been taking physical therapy and they’re telling me the shoulder will be 90 to 95 percent in about two months,” Stout said. “Being 100 percent for the start of the basketball season — that’s what I’m aiming for right now.”