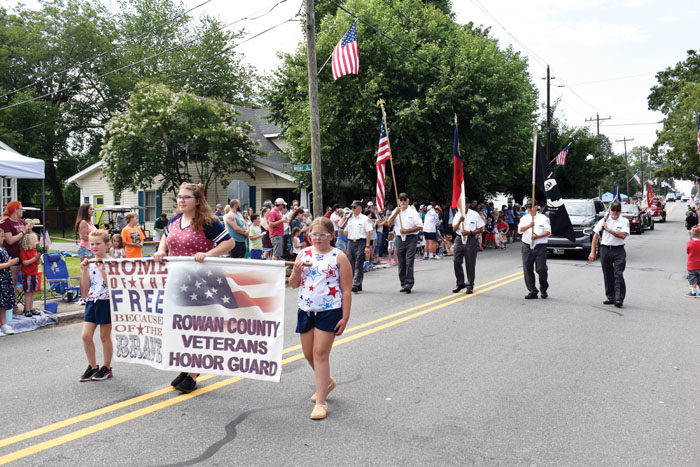 FAITH — Spending two hours in morning sun, with just a hint of a breeze, watching all variety of floats, cars, trucks and unusual vehicles pass by was just fine with the hundreds who turned out on Monday, July 4, to watch the 76th annual Fourth of July parade.

The parade kicks off the final day of nearly a full week of events, including musical performances each night behind town hall. The only entry fee was a lawn chair or something to sit on.

Fire trucks from departments around the region kicked off the route, as those watching sat, stood and even laid on blankets, sometimes as many as five deep along the roadsides. Canopies dotted the landscape, lawn chairs were tucked in every available space and shade was the premium spot. Grand marshals of the parade were the Rowan County Veterans Honor Guard, and master of ceremonies was Buddy Poole.

Everyone from local businesses to politicians participated in the two-hour event, including Rowan County Sheriff Kevin Auten.

“This is my last one,” he shouted wistfully from the float before giving a big smile and wave to those cheering. Auten is retiring this year.

The newly redesigned Reaper’s Realm in Salisbury, a haunted attraction opening in late September, was well represented with zombies, ghouls, terrifying clowns and human-pig chimera creatures. Children watching were either fascinated by the creatures, giving fist-bumps and laughing, or turning quickly to find mom or dad.

Click here to view more photos from the festivities in Faith.

Nine young ladies also graced the parade route as competitors for the title of Miss Rowan County Veteran Queen, with a cash prize of $100. Rachel Reese Webster, 19, representing the Disabled American Veterans (DAV) Chapter 96, was chosen as the 2022 Queen on stage at the American Legion Park.

“The sacrifices of our veterans are not honored nearly enough and I have the ability to change that,” she said previously.

Last year, some concern was voiced over the participation of Confederate re-enactors participating in the parade, but it was eventually decided the parade is open to those who properly apply and abide by the rules. So those re-enactors returned this year, complete with firing of muskets. They were tucked in line between the Sons of Confederate Veterans and the Confederate Order of the Rose.

The parade led the way into an activity-filled afternoon, with numerous rides and games of skill provided by Wade Shows, Inc.

According to the Fourth in Faith website, in addition to a number of food vendors, local volunteers were on hand early Monday morning to being preparing 4,500 pounds of barbecue shoulder, 5,000 hot dogs, 7,000 hamburgers, 1,800 pounds of country ham, 5,000 ice cream cones, 20,000 drinks, and 2,500 pounds of cabbage for making slaw. The Faith Fourth of July Celebration is sponsored by the Faith American Legion Post #327, the Faith American Legion Auxiliary Unit #327, and The Faith Civitans.

“Anybody who leaves here today that isn’t tired and stuffed didn’t stay long enough,” said Edward Franks, who was visiting from Charlotte after hearing about the event from friends.

The night closed out with a concert by Mother Trucker Band, and a fireworks display.