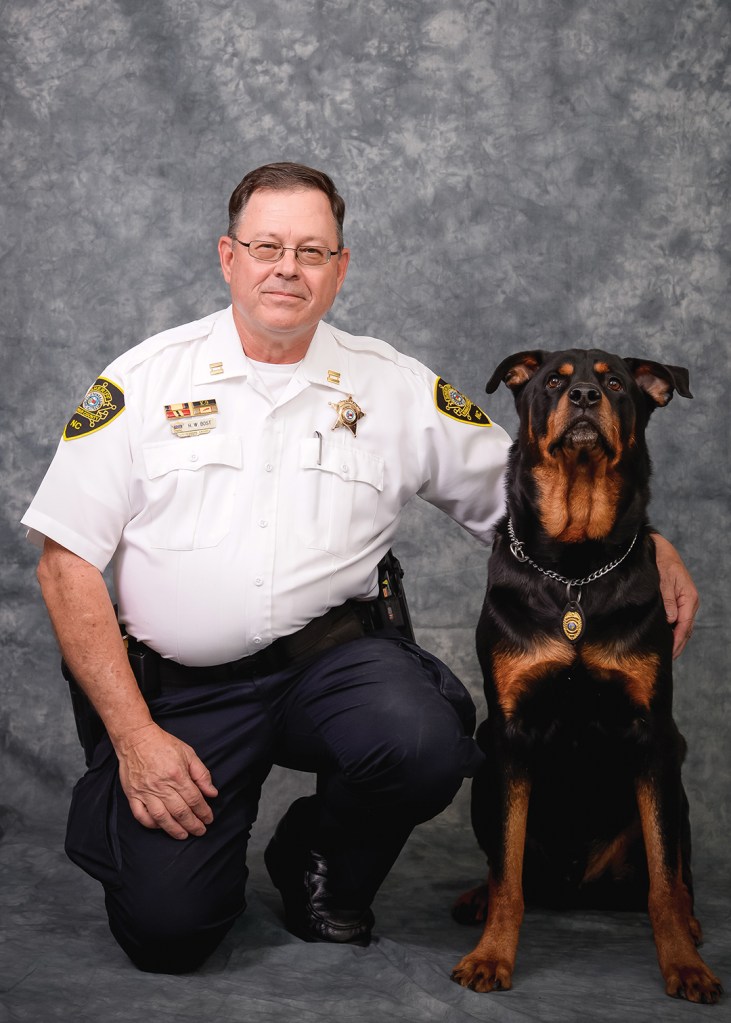 ROCKWELL — The Rockwell Police Department wouldn’t be where it is today without the supervision of a police chief who has a significant history with the municipality as a whole.

Chief Hugh Bost Jr. has officially announced his retirement date of Sept. 1, when he plans to begin serving as a reserve officer while he decides what might be next.

“It’s almost like graduating from school again and staring into a void,” he said. “It’s entering the unknown and not knowing where life is about to bring you. But I’m ready to wind down for a bit.”

He holds an associate’s degree in electronics and an Advanced Law Enforcement certificate. Additionally, he received the Paul Wilson Law Enforcement Officer of the Year award on May 16, 2012.

Chief Bost began his journey in emergency services after joining the Rockwell Fire Department in 1972 before being elected to fire chief in 1976. He said being a police officer hadn’t always been the goal for him, but after noticing how often fires were caused by criminal activity, he knew he had to get educated.

He decided to enroll at Rowan Technical Institute, now the north campus of Rowan-Cabarrus Community College, in its criminal justice program. Another unexpected turn hit when he found himself in Basic Law Enforcement Training rather than the classes he was initially enrolled in. Regardless, he wanted to continue in the field.

“I had always had an interest in emergency services,” said Chief Bost. “I talked with some guys that were reserve officers at the sheriff’s office. One of them was at Spencer and one was with Salisbury when they had a reserve program. So I got started and got in the program and thought to myself, ‘you know what, I think this is something I want to do.'”

He was sworn in before the Rowan County Fair in 1977 and has served with the Rowan County Sheriff’s Office ever since. According to Bost, he “kinda worked my way up the chain to a slick sleeve special deputy” and throughout the years, he served the sheriff’s office as a staff sergeant, sergeant, lieutenant and currently the captain of special deputies in addition to his duties as police chief of the Rockwell Police Department. Additionally, he worked as a K-9 handler with two Rottweilers named Rambo and Zukko, who assisted in narcotic searches and patrol.

“Working with K-9s has been one of the most rewarding experiences of my career,” Bost said about his first dog.

Rambo was dually sworn and worked with Bost in sheriff’s office and police investigations and by the end of his career, he had sniffed out $92,000 worth of drugs and cash.

When his first K-9 retired, Bost took on Zukko, who worked with the him on patrol.

Back in 1996, after Bost was a special deputy, past mayor of Rockwell Harold Earnhardt asked the sheriff’s office if they would run Rockwell’s volunteer police department program that was in place at the time. The proposal was the department would be overseen by Special Deputy Lieutenants James Jones, George Cress and Bost himself.

However, sheriff at the time Robert Martin asked Bost to take over the Rockwell project.

“I had mixed emotions at first, as I was already the fire chief and coordinator for law enforcement,” Bost said. “But I talked with the mayor and he thought it was a great idea. So, I signed on as the sheriff’s lieutenant to look over the Rockwell Police Department in ’96 and worked as special deputy with the sheriff’s office from ’97 to ’98.”

Bost, along with the volunteer program, began to advance and grow for the next few years. But he had another vision for the department, including turning it into a full-time agency instead of working contractually with the sheriff. When he went to write for grants to fund equipment and upgrades, he couldn’t apply for Rockwell because there was no true charter department at the time.

Five years later, in 2001, after talking with Rockwell’s mayor at the time, Robert Bost, they made the decision to charter the town’s own police department. That September would also mark the beginning of Chief Hugh Bost, Jr.’s journey for the next 21 years as chief of police.

His service included 40-hour work weeks while being on call in addition to acquiring vehicles for the department, recruiting officers and working to add and upgrade different technology for not only Rockwell’s police agency, but for the town.

“My dad always told me that you can’t do the job if you don’t have the right equipment,” said Bost, recalling his father Hugh Bost’s private electrical company. “I wanted all the cars to have computers and made sure we had security cameras installed so we could see everything.”

Bost used his electrical background to rewire the whole fleet of Rockwell Police’s cars and move the town over to a voice-over-internet protocol (VOIP) system, and built the town’s data network on it. In total, 27 to 28 work stations are on two servers at the department.

Current Mayor Beau Taylor confirmed these improvements, saying Bost has been a big benefit to the town.

“He does the little things for the town of Rockwell and helps with computers since he has IT experience; he set up two town servers at the department,” he said. “I retired from Food Lion 30 years ago so I know how this goes. I hate to see him leave, but I hope he has a real happy retirement. He deserves it.”

Bost planned to retire at age 67 throughout his career because Medicare coverage would cover both he and his wife in 2022. Unfortunately, his wife Shirley Hildebrand Bost died in September 2021, and Bost said he didn’t know at that point if he would ever retire.

“I remember thinking that I couldn’t go on and come home to look at four walls,” he said. “But, the Lord works in mysterious ways.”

In January this year, Bost met Sue Choat who runs Catering by Sue of Richfield. The two have been together since and it was the motivation he needed to continue with his original retirement plan.

Bost said his family has always been very supportive throughout his career in both fire fighting and police work; however, there were times he wasn’t able to be there for them, whether it was his fire alarm pager going off in the middle of a grocery store or leaving the house as early as 2 a.m. for a call.

“It’s part of being in emergency services,” he said. “It’s a profession that when duty calls, you’re wanted and you’re needed right then. If you’re in it for the right reason, you’re going to drop what you’re doing and help your fellow neighbor.”

Sgt. Cody Trexler, a full-time officer at the Rockwell Police Department, was recently appointed interim police chief and will be taking the role as chief of police in July.