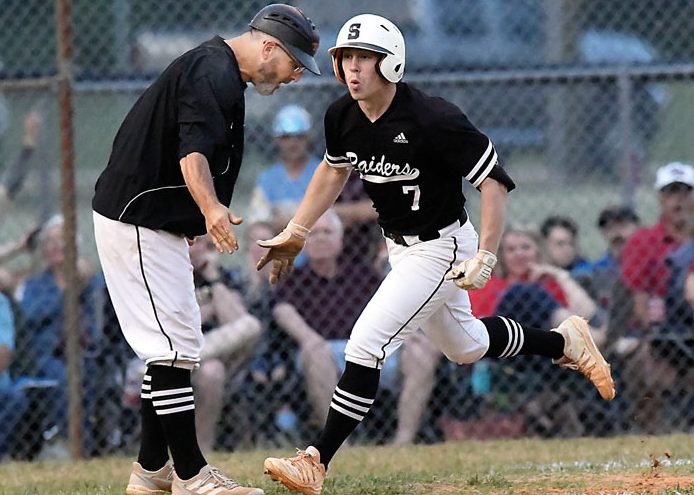 South's Nathan Chrismon celebrates hitting a three-run home run with his dad, Thad, as he rounds third base. File photo by Wayne Hinshaw, for the Salisbury Post

“Colton played third base like Brooks Robinson in the 3A State Championship Series,” South head coach Thad Chrismon said. “You want to know how that happened? You want to know why he made plays at the end of the year, he didn’t make at the start of it? It’s because of  how hard he practiced and how hard we practiced. Our practices were intense. They were competitive. We practiced at game speed.”

South practices weren’t for the timid, with guys diving and sprinting and working on their two-strike approaches against a pitching machine cranked up to 92 mph.

All that sweat and grime paid off with a state championship. Everyone knew South was going to be good in 2022 with a roster full of seniors, but those passionate practices made the Raiders the best team in school history and one of the finest in county history.

“I remember our athletic trainer coming out to baseball practice for the first time,” South shortstop Nathan Chrismon said. “They couldn’t believe a baseball team was practicing that hard. Practicing as intensely as we did, we were able to stay calm in any game situation. No game was too big for us.”

A 3A state title , the county’s first since 2019, and a 30-6 season for the second-highest wins total in county history, made Thad Chrismon, who orchestrated all those offseason voluntary workouts and spring practices, the easy choice as the Post’s Rowan County Coach of the Year.

He’s honored for the second straight season and for the third time since he became South’s head coach in 2009. He also won in 2012 when South went 18-11. His career record is 212-132. He’s tied for sixth on Rowan’s all-time wins list with former Salisbury coach Tom Sexton.

This group of South players began molding long ago, with Chrismon’s son, Nathan, and Ty Hubbard, the son of long-time Northwest Cabarrus coach Joe Hubbard, as the nucleus. They won two state championships as youngsters in Cal Ripken Baseball.

“It’s been special group of guys for a long time,” Coach Chrismon said. “Really good ballplayers, but even better people. They’ve had chemistry and a strong bond for years. This is one of those rare groups where their greatest motivation has always been doing it for each other, not doing it for themselves.”

Nathan Chrismon and Ty Hubbard formed South’s starting varsity middle infield as freshmen, and freshman center fielder Kane Kepley was beginning to shine by the end of that 2019 season.

The COVID season — 2020 — knocked everyone for a loop, but once the Raiders got rolling in the delayed 2021 season, they were excellent. They won the 2A Central Carolina Conference Tournament, reached the third round of the state playoffs and finished 14-4 with a junior-heavy team.

Young lefty Haiden Leffew had emerged as an ace pitcher by the end of the 2021 season. Graduation left holes in right field and at third base, but the bigger concern for 2022 was who would pitch when Leffew didn’t. South was moving up to 3A for 2022, and membership in the South Piedmont Conference meant home-and-home with Carson, West Rowan, Northwest Cabarrus and East Rowan, which had ACC recruits as its 1-2 pitching punch.

Carson Crainshaw was limited to 10 1/3 innings by arm ailments as a junior. His emergence as South’s No. 2 starter was a game-changer in 2022.

“Crainshaw becoming that confident guy we could put out there every Friday changed a lot,” Coach Chrismon said. “Now we not only had a lineup that could put a lot of pressure on people, we had the defensive play, and we had the frontline pitching. Crainshaw’s development allowed us to use Chandler Oddie in a relief role or as a spot starter, and he was great at it.”

As the long season unfolded, the first full season since 2019, South took a few poundings when that trio didn’t pitch. Randleman, which would win the 2A state title, hammered the Raiders 19-2 in March.

“We had two conference games that week and we weren’t going to pitch any of our top three guys,” Coach Chrismon said. “That loss wasn’t a hard one to just throw away. I don’t know that it helped us, but it didn’t hurt us. We didn’t dwell on it. We never mentioned it again.”

Carson outscored the Raiders 9-4 on Easter Monday in the championship game of the Cannon Ballers’ tournament — the highlight of the young Cougars’ season — but South stayed focused on the big picture, didn’t throw its top three arms, and then beat Carson 10-5 and 10-0 in conference games that same week.

“The goal from the start was winning our conference and after we split with East Rowan in early April, we knew we couldn’t lose another conference game,” Coach Chrismon said. “From that point on, there was pressure in every SPC game we played, but our guys responded well to that challenge. We went 13-1 in a great conference, and conference play chiseled us for the playoff run. No matter who we saw in the playoffs, we weren’t going to see more velocity and we weren’t going to see bigger crowds. We were comfortable with velocity. A huge crowd wasn’t going to scare us.”

The regular season ended with East and South still fighting like dogs in the street, still deadlocked for first place in the SPC.

When the teams collided at South for the SPC tourney championship on May 5, the stakes were sky-high. The teams were rated as the two best in the 3A West and the winner would be the No. 1 seed in the 3A West bracket, meaning home-field advantage throughout the playoffs. The fans that attended would have been a really nice crowd for a football game. Had East won that game, the history of the 2022 season may well have been written differently, but South’s 5-2 victory, on the strength of Nathan Chrismon’s three-run homer, kept the Raiders grinding toward that elusive state title.

South and East would meet again, for the fourth time, in the third round of the playoffs, one of the marquee games in county history. In that one, South beat a stellar senior pitcher, UNC recruit Cameron Padgett, who hadn’t lost since his freshman year. The Raiders kept moving forward.

South was able to refocus after that euphoric triumph, the biggest baseball win in school history. and handled North Lincoln and East Lincoln teams loaded with major recruits. South won a best-of-three West Championship Series with East Lincoln, smashing East Lincoln by the 10-run rule in both of the games played at South.

Losing the first game in the 3A State Championship series against South Brunswick proved only a temporary setback. South came from behind to win the next two, including a decisive third game in which South trailed 6-2, but won 11-6.

“That final game was a microcosm of our whole season,” Coach Chrismon said. “Got hit in the mouth, but stayed the course. We were able to stay calm when it was pretty chaotic, and one at-bat at a time we clawed our way back into it. I remember being down 6-2 going to the fourth inning, but still feeling very confident. We were trailing, but we had the momentum. We had the team that was going to get the job done.”

Coach Chrismon said his young assistants — Grayson Miller, Austin Chrismon, Brandon White and Parker Hubbard — were a big part of it. Like the players, the coaches had the right chemistry. The assistants who came before them, such as Brett Stirewalt, also had a hand in history.

While some will always perceive South 2022 as a Cinderella story, that wasn’t really the case. This was a great team.

Even after the playoff grind against numerous Division I arms, eight South starters batted over .300.

Hubbard had 50 hits and 39 RBIs, while batting .442. Besides being one of the all-time best center fielders, Kepley stole 33 bases and scored 47 runs. Nathan Chrismon put up great numbers across the board and had a long run of clutch hits and defensive plays in the postseason. Catcher Jacob Ritchie drove in 37 runs. Leffew had a remarkable two-way season, striking out 124 and smacking 13 doubles as a much-improved offensive player. First baseman JD James was named MVP of the state tournament. No. 9 batter Finch McMillin batted .338. There were no weak spots.

South hit a modest nine homers, but the Raiders posted some huge offensive numbers, including 51 doubles and 98 steals.

“We could do a lot of things defensively and offensively,” Coach Chrismon said.  “A season is a long, tough process, but we had the experience necessary to make it all come together.”

It started with those intense practices.

Now Coach Chrismon can’t go anywhere in Landis or China Grove without someone telling him how proud they are of him and the Raiders and how proud his late father-in-law, Larry Deal, would be of this team.

The Rowan County Commissioners saluted the Raiders. The Kannapolis Cannon Ballers honored them.  The Stag & Doe fed the team pizza, as the iconic China Grove restaurant returns to business.

“You’re a little bit exhausted at the end of it all,” Coach Chrismon said.  “But I enjoyed it, and I thoroughly enjoyed watching our guys enjoy it. More memories are still coming back at me every day, and I smile with every one.”