SALISBURY — Children visiting Waterworks Visual Arts Center knew him simply as “Mister Don, the Doorman.” He always greeted them with a welcoming smile as he held the door for classes of fifth graders visiting an art museum for the very first time. And to the guests at the Center’s annual oyster roast fundraiser in January, he is remembered as the man who handed out the aprons. He was often behind the scene at Waterworks, making sure all the minor details were attended to at receptions and other events. And, when it came time for photos to be snapped, he kept himself in the background as much as he could, typically placing himself in the back row whenever possible.

What all those folks may not have known was that this elegant, soft-spoken, gentle man was also an award-winning artist, as well as a teacher whose impact on the lives of his students remains fresh, decades after he retired from the classroom. His figure drawings and figurative paintings had been featured in numerous state and national juried shows and won national awards. His work is on display in the collections of more than a dozen universities, institutions and businesses throughout the South. 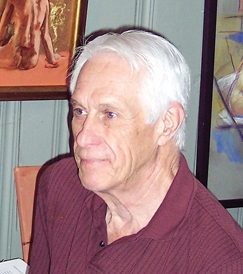 Sadly, for those who knew him, Donald Everett Moore passed away in February, just a few months shy of his 79th birthday. Yet, he filled those eight decades with service to art in just about every way imaginable.

Moore, born in Birmingham, Alabama in 1943, exhibited talent at a very young age. His brother Ray notes that when Don was around eight years old, he created a beautiful charcoal drawing of an angel, which Ray still has and cherishes.

Later, while visiting a local museum, Moore was fascinated by the sculptures and wanted to understand more about that art form, so he touched the works to literally get the feel of them. The people who ran the museum got upset and tossed him out, exclaiming that he had no business there and, besides, he was without any artistic talent. While others might have been discouraged, those were just the sort of challenging words the young boy needed. He went on to attend art school at the University of Alabama, where he received both bachelor’s and master’s degrees in fine art. He was also a student at the University of Georgia and did summer studies at the prestigious Art Students League in New York City, where such disparate artists as Ai Weiwei, Al Hirschfeld, Cy Twombly and Charles Dana Gibson, among many others, had also studied.

As a professional artist, Moore focused on paint as his primary medium. In describing his work, he once said, “I don’t paint to make people happy or to match furniture. I hope my paintings make people think.”

Perhaps most noteworthy about Moore’s body of work is how hard it is to categorize. Beginning later this month, Waterworks is dedicating all of its galleries to the paintings of this amazing artist, and a brief stroll through the exhibition will attest that his work is as varied as it is thought-provoking. One views a portrait of an elegant man painted in the style of a Gilbert Stuart, and a few steps away is a triptych illustrating multiple aspects of a Salisbury treasure, Hurley Park. Nearby hangs a nude with touches reminiscent of the cubism of Juan Gris or Georges Braque. A short distance from that is a yellow canvas with nothing more than a half-finished face of a beautiful woman entitled “Memory.”

That curiosity about all types and styles of artwork is perhaps the reason Moore spent most of his career as an art teacher. He loved art and wanted to share it with others, whether they were young college students, older retirees looking for something to keep themselves busy, or young children just starting to recognize the joy of artistic expression.

He taught briefly at the University of Alabama, then, as an assistant professor at Coker University in Hartsville, South Carolina. In 1974, he moved to the Piedmont area of North Carolina where he served as director of the art department of Mitchell Community College in Statesville for 32 years.

After retirement from Mitchell in 2004, Moore discovered Waterworks and immediately immersed himself in its programs. His love affair with the center lasted for the rest of his life. He served on the board of directors, and taught figure drawing and art appreciation classes for several years while, simultaneously volunteering for any assignment that needed filling. Moore particularly loved working with young artists, to build in them a fire of appreciation for art, similar to his own. In 2008, Moore was the first person to receive Waterworks’ Volunteer of the Year Award, because of his demonstrated commitment to volunteerism and the arts.

Most recently, he served on the Exhibitions Committee, locating and showing the works of local and regional artists who had previously received little attention.

Waterworks partnered with the Lutheran Services Abundant Living Adult Day Care (now Trinity Living Center) program, where participating artists create portraits of clients and donate them to their families. Moore was a ready volunteer for that program and, no doubt, many local residents now have Moore’s paintings of their loved ones hanging in their homes.

He was involved with a number of other art organizations. He was a juried member of the Associated Artists of Winston-Salem, and an active member of Plein Air Carolina (PAC-Salisbury) and Mooresville Artist Guild. He was a lifetime member of The Artist Guild of Statesville and the Iredell Museums, and served on the advisory board for Mitchell Community College’s Fine Arts program.

Moore left behind a body of work that reflects his curiosity, his openness to trying new ideas, and his love of people. And, true to his goal, they make people think.

Don Moore – An Art Filled Life will be on display at the Waterworks Visual Arts Center, 123 E. Liberty Street, Salisbury, from June 20 to Sept. 2. The exhibition will feature more than 150 works by the artist. A special opening night reception will be held on June 17.