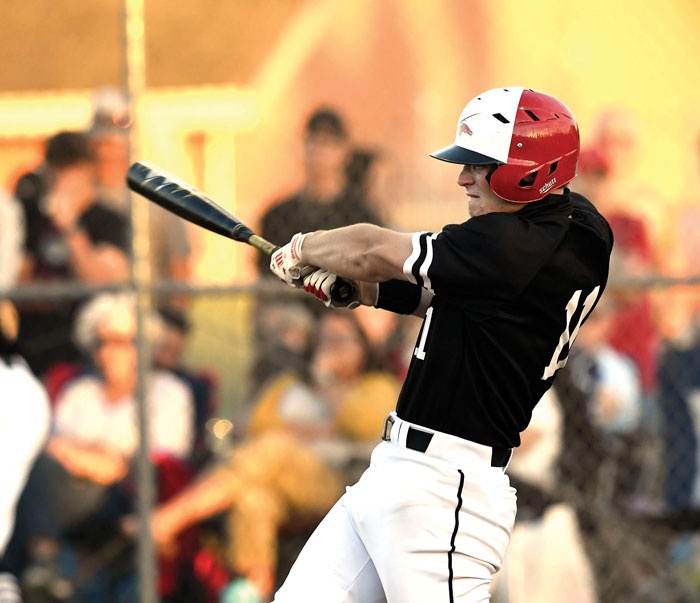 JD James had a key three-run homer for the Raiders in Saturday night's victory. File photo by Wayne Hinshaw, for the Salisbury Post

LANDIS — JD James’ three-run homer in the bottom of the sixth cleared the right-field fence, gave South Rowan’s baseball team an 11-1 win over East Lincoln and punched the Raiders’ ticket for the 3A State Championship Series.

South has never been this far before.

“That homer by JD, that’s the killer instinct that you want to have,” said South head coach Thad Chrismon when asked about James’ blast. “We’re at home and once it got to the fifth inning,we knew we had a chance to end it early.”

Top-seeded South won the best-of-three West Regional with 10-run-rule romps in Games 1 and 3. Game 2 got away from the Raiders 6-4 on Friday at East Lincoln, but South (28-5) had no trouble bouncing back at home on Saturday in front of another big crowd.

The other hero was right-hander Chandler Oddie, the No. 3 pitcher who has been the unsung hero all season.

Oddie has pitched in more than 20 games. He hasn’t lost any of them and he’s won or saved quite a few. Oddie shut out 11th-seeded East Lincoln (21-8) until the sixth inning, and by then South had an 8-0 lead. Like James, Oddie will continue his playing career and education in the junior college ranks.

“He mixes it up, does a good job against left-handers or right-handers, and he’s battle-tested,” Chrismon said. “We felt good about his chances to pitch a great game tonight.”

South was in control all the way after a two-run bottom of the first.

South pushed the led to 4-0 in the fourth. Carson Crainshaw doubled off the wall. A hit by James and Finch McMillin’s walk loaded the bases. Kepley singled for a run, and a wild pitch scored another.

South nearly ended the game in the bottom of the fifth, putting together a double by Haiden Leffew with singles and walks to go up 8-0. Ty Hubbard made a bid for the 10-run-rule, but East Lincoln’s Haigler, who had moved to center field by then, made a fine catch.

The only adversity Oddie encountered came in the sixth when the Mustangs greeted him with three consecutive singles. Then Oddie walked in a run, and Coach Chrismon made a mound visit.

“He was smiling and he just told me to relax and have fun,” Oddie said. “I’m not going to strike out a lot of guys. I had to trust my defense. That’s what’s gotten me here.”

Oddie provided that defense. He fielded a chopper that would have been trouble if it had gotten past him. He threw home to catcher Jacob Ritchie, who missed Game 2 with an injury, and got the forceout.

Oddie struck out the next two, and South went back to work with the bats.

Oddie was getting close to the pitch-count limit of 105, but that no longer mattered after James connected.

Hubbard, who started South’s three-run sixth with a hit on an 0-and-2 pitch, had three hits and seven for the series. So did James.

Colton Fisher had two hits. South had a dozen.