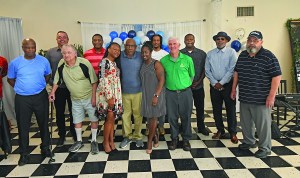 SALISBURY — Ralph Ellis is 66, sprinting hard after 67, but the laugh is still a teenager’s laugh.

He cackles merrily early and often. Sports tend to keep you young and in a good mood. Sports (and family) have been Ellis’ life.

Ellis, who entered the Salisbury-Rowan Hall of Fame in 2015 for his life-long contributions to Rowan County sports, retired again on Saturday. He says with a chuckle that this one will stick.

He was honored by family and friends with a sit-down dinner at The Knight Pavilion.

He was saluted by words and deeds for 40 years of coaching and his positive impact on Rowan youth. Taking some bows with him was Willie Ellis, a long-time coaching comrade who put in 28 years of service. Twenty-eight years is a grind, but 40 is mind-boggling.

A longtime Spencer resident who is most closely identified with West Rowan athletics, Ralph played football and basketball for the Falcons in the early 1970s.

They talked him into running track as a senior. A groin injury immediately sidelined him for the season, but his budding love affair with track and field wasn’t diminished by the injury.

Ralph got to coach two spring sports at West right away. Track and field, of course, but also tennis.

“Terry Osborne hurt his back, and West needed a tennis coach, but I was coaching the track team,” Ralph said. “Raymond Daugherty was the AD. He could pull a few strings. We’d have the track meets and tennis matches at the same place, so I could coach both teams.”

His tennis coaching career ended after one year. But track would go on and on, a long-running melody of great performances.

“West is a rural school, but West’s boys have had 10 state champions (eight different athletes) in boys track,” Ralph said. “Other than North Rowan and Salisbury, not many schools can say they have produced champions like that.”

Jason Williams won two high jump titles, while Sturgis won the triple jump for West twice. Football star Kendall High came out for track as a senior and took the state discus title. Lamont Savage won one with a soaring long jump. That event is still the “broad jump” as far as old-school Ralph is concerned.

“They had to bring out two tape measures to measure it because the first one only went to 150 feet,” Ralph said. “That throw is still the 2A state record.”

In 1994, West principal Henry Kluttz called Ralph into his office.

“First time I’d ever been called to the office,” Ralph said. “He said he wanted to start an indoor track program. I told him that was a good idea, as a lot of teams were getting started with it. Then he said he’d only do it if I agreed to be the coach, and so I coached. That’s the year West got started with indoor track.”

Ralph’s football coaching career lasted almost as long as his track adventures. Thirty-six years of football with the Falcons. Through some lean times in the 1980s as well as the dynasty years and the state championship three-peat under head coach Scott Young.

He coached receivers and offensive line some seasons, but his forte turned out to the be defensive line, where he tutored players such as Smith, Shrine Bowler Tristan Dorty and Rowan County Player of the Year Eli Goodson.

“Coaching defensive line wasn’t hard when we had Smith and Goodson,” Ralph said cheerfully. “We just let those boys go. My job was just to make sure the bus didn’t break down.”

Ralph’s basketball coaching contributions were significant. He was an assistant coach from 1981-82 to 1996-97. There were a lot of outstanding West teams in that era, coached by Jack Lytton, Charles Hellard, and then Shipwash.  West was a basketball school long before the football program found consistent success.

“So many great players and great teams, a lot of conference championships,” Ralph said. “We were good every year and people would assume we’d automatically make it to the regional every year, but those sectionals were tough to get out of in those days, and the atmosphere was something. We came up a little short a number of times. I remember (Concord coach) Bo Brickels coming into our locker room one time and telling us we’d won more games than anyone in the state over a five-year period. We didn’t know that. We did know we’d beat a lot of good teams.”

Prior to the 1996-97 season, Ralph told Shipwash it would be his last season of basketball. He was wearing down trying to coach indoor track and basketball at the same time.

“Those boys sent me out with a championship,” Ralph said. “My last year was the year West won its first basketball state championship.”

Shipwash acknowledges that the assistant-coaching contributions of Ralph and Willie Ellis were instrumental in West’s first basketball state title.

Ralph is a walking road map of West sports, but he’s done his part for young athletes all over the Piedmont.

The Ellises teamed up with legendary North Rowan coach Robert Steele to form the Rowan Express Track Club, which jump-started the careers of dozens of aspiring athletes at a young age. Many got college scholarships.

“We never turned away anyone who wanted to compete, regardless of what school they went to,” Ralph said. “We were helping athletes from all over Rowan County, from Davie, from Stanly, from Davidson.”

He lives two minutes from North Rowan High, so he’s not far from his granddaughter Brittany Ellis’ track practices.

He provides some tips for the talented sophomore with her throws, so it’s going to be tough for him to stay completely retired.

Brittany is the No. 1 seed for this weekend’s 1A State Championships in the shot put and the discus. She’ll be one of the keys for North’s hopes to challenge schools such as Swain County and Mountain Island Charter for the state team title.

You have to like her chances. The Ellis family is no stranger to championships.