A still frame from the surveillance footage of the theft.

SPENCER — Kevan Glover is gearing up for a busy spring and summer at The Konnected and The Konnected Foundation. The Spencer-based entertainment venue, production company and charitable organization he oversees are preparing to host a number of events and programs in the coming weeks.

Unfortunately for Glover, one thing he did not anticipate was the theft of equipment from his organization’s property. Located at 1625 N. U.S. Highway 29, The Konnected is hard to miss for drivers passing by and a popular venue for various entertainment attractions.

On the evening of May 11, cameras in front of The Konnected captured an individual pull up to the entrance gates, grab a set of lights meant to keep the banner and entrance to the property visible at night, and drive off with them within a matter of seconds.

Glover called police once he saw the footage but the theft remains unsolved. Glover explained that law enforcement “looked around” the area where the theft occurred, but no other evidence besides the video appeared to have been left behind.

The theft has forced Glover to replace the missing equipment, and nearby residents are urged to keep an eye out for similar incidents. The Konnected is still looking forward to a busy season.

A Konnected to Gospel event is scheduled at 2 p.m., Sunday, May 15, at the venue and on May 22 Glover’s organization will play host to a “Wrestling Extravaganza” that is open to the public and features giveaways.

Additionally, programs for local youth including the T.E.A.C.H. classes (Technology, Entertainment, Arts, Communication and Health) will also be offered along with various other charitable efforts Konnected involves itself with in the community.

Anyone with information about the theft or who may recognize the individual in the footage is asked to reach out to local authorities around the area. 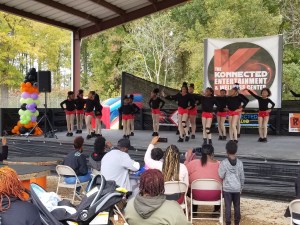 Brad Rhodes: Why women need to be worried about…