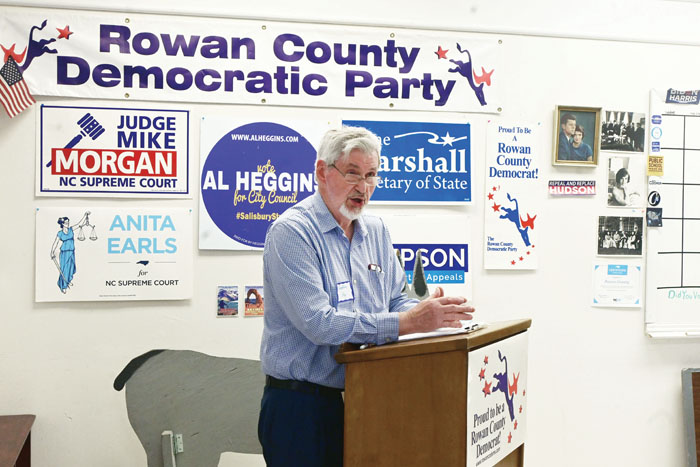 Chairman of the Rowan County Democrats Geoffrey Hoy welcomed members back after two full years apart during COVID. Marking the official opening of the party's headquarters, the group celebrated their return to the tradition of a monthly breakfast and guest speaker. Elisabeth Strillacci/Salisbury Post

SALISBURY — After exactly two years on a COVID hiatus, Rowan County Democrats celebrated the reopening of their West Innes Street headquarters Saturday morning, returning to an established ritual of a pot luck breakfast and guest speaker.

Rowan County Democrat Chairman Geoffrey Hoy welcomed a group of about 25 attendees, including two representatives from the Young Democrats of Rowan and Cabarrus County and several candidates for office.

Joyce Jonas and her husband, Matthew Knight, have been attending local Democrat meetings for well over a decade, she said, and “We are really happy to be back together,” she said. “It’s wonderful to see everyone again.”

Hoy said the group had a few Zoom meetings over the last two years, but for the most part, Saturday morning was the first time most of them had seen each other face to face during the pandemic. So he was excited about the turnout, and about having two young faces in the room.

Garrett Readling, president of YDRCC, said he and his fellow attendee, Zach Finley, who is now the secretary of the Young Democrats of North Carolina, have been making concerted efforts the support local candidates, noting that student debt cancellation is a “huge issue for us.”

Readling and Finley said the recent Supreme Court actions on Roe v. Wade have been a wake up call, because both said they had always “just assumed it was established, and even though we knew there were always efforts to change it, we thought it would never happen.” And though recent polls have shown between 64 and 66% of Americans say they do not want Roe v. Wade overturned, Finley said it does not always translate at the ballot.

“They may really support it, but if it is not a driving issue for them, it will not cause them to vote for someone different at the ballot box,” he said. “If the economy, or jobs, or taxes are what motivates them most at the end of the day, they will go with the candidate who best addresses that issue.”

In addition to welcoming Readling and Finley, Hoy introduced guest speaker Rod Crider, president and CEO of Rowan Economic Development Commission. Crider let those in attendance know that the growth in Rowan County over the last three years has been by leaps and bounds, and is expected to continue.

“Right now we have the potential in the pipeline for development that represents 4,000 jobs and as much as $2.5 billion in capitol expenditures,” he said.

Hoy reminded all in attendance that early in-person voting would end at 3 p.m. and anyone who had not yet voted should be sure to vote in Tuesday’s primary, when polls would be open from 6:30 a.m. until 7:30 p.m.

Protesters rally for abortion rights in front of county…