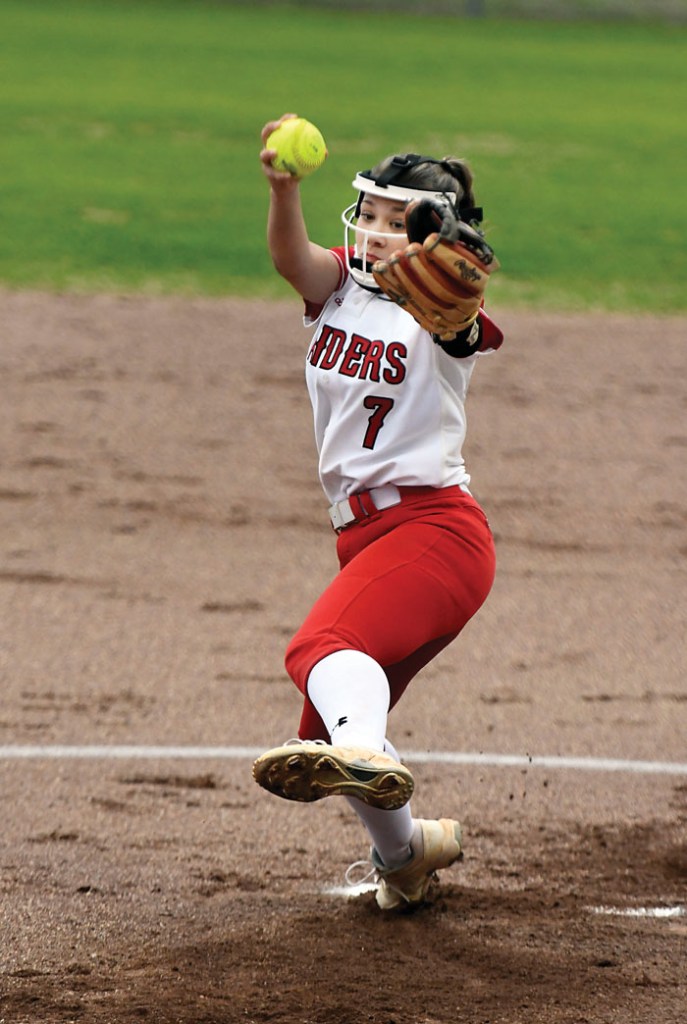 South Rowan's pitcher Lexie Ritchie should be a force for four years with the Raiders. File photo by Wayne Hinshaw, for the Salisbury Post

LANDIS — South Rowan head softball coach Dean Mullinax has been waiting eagerly for the Class of 2025 for a while.

Six freshmen have joined the Raiders, including a couple of familiar names — pitcher Lexie Ritchie and shortstop Kynlee Dextraze — from the 2019 Rowan Little League team that won the World Series.

Ritchie and Dextraze figure to be up-the-middle core players for South to build teams around for four years.

“We’re really young (9 of 14 on the roster are freshmen or sophomores), but we do have a chance to be the best that we’ve been in a while,” Mullinax said. “We’ve got a lot more versatility, a lot more depth, a lot more speed, a lot more pitching, a lot more options as far as our lineup and our defense. We’ve added quite a few girls who are true utility players. They can play anywhere on the field.”

This will be the sixth season for Mullinax, who is honored to be one of the coaches chosen for the State Games.

He’s a dedicated guy who brings sort of a football mentality and work ethic to the softball field. He had one really good team in 2018 when the Raiders were 17-10.

South moved up from 2A to 3A when this school year began, so even an improved South team will have a tough time climbing above fifth place in an eight-team South Piedmont Conference that includes perennial power Central Cabarrus as well as the three Rowan schools that dominated the North Piedmont Conference in 2021 — Carson, West Rowan and East Rowan.

Still, the Raiders are more than ready to show what they can do. Making the playoffs would be an accomplishment and is a realistic goal.

South returns the girls who led the offense in 2021. Senior Zoie Miller, who had to carry the pitching load when she was a youngster, is now established as South’s center fielder, and she’s an on-base machine. Her .512 OBP led the team in 2021.

Junior first baseman Bailey Yon will be starting for the third year. She batted .371 last season. Senior outfielder Kali Nelson is coming off a .350 season.

South has swung the bats great, at times, in the early going this season. The Raiders overpowered 2A opponents Robinson, East Davidson and West Davidson (twice), piling up double-digit runs.

Thomas has been leading off and has batted .464 in the early going, while Menius has hit .393.

South fell 11-1 to Central Cabarrus in its first SPC game on Tuesday, although it was more competitive than it sounds. Central scored five runs in the sixth to make it a 10-run-rule game, but the Raiders hung in there behind Ritchie for a good while. She pitched a complete game.

Softball success has to start in the circle. Ritchie will make an impact there. Avery Crowell, who competed well  as a freshman, will also continue to pitch quite a bit.

Ritchie and Crowell can also swing with some authority. They are expected to rotate with one in the circle and the other handling second base. Both will be able to stay fresh.

Miller provides experienced pitching depth, while Yon can throw an inning or two if needed.

Thomas and Menius are catchers, but they can play all over. The plan is for one to catch, while the other handles left field.

It should be a very good outfield, with Miller anchoring it in center. Senior McKinley Faw has been a good player for a while, and Nelson, Menius and Thomas can hit. There’s a lot of depth with senior Caroline Barbee, Emma Woodlief, MacKenzie Wells and Aubri Austin.

The infield looks set with Yon at first, the Ritchie/Crowell combination at second, Dextraze at short, and sophomore Skye Fernandez at third.

Fernandez had two of South’s eight hits against Central Cabarrus.

Menius or Faw could move to the infield if needed.

“We’re in a very tough league, but we are getting better offensively and defensively,” Mullinax said. “It’s exciting to have a full season again, and we’ve got girls who like to compete.”

Don’t look for miracles, but look for a good season.

And the future is very bright.