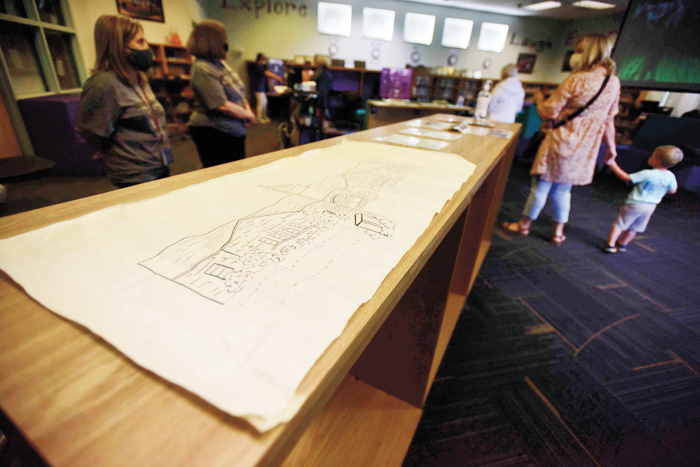 Carl Blankenship/Salisbury Post - A vintage drawing of the school scanned for commemorative shirts the school sold at cost.

ENOCHVILLE — The former Enochville Elementary School has been without students for eight months, and what happens next to the closed building remains uncertain.

Rowan-Salisbury Schools closed Enochville and Faith elementary schools in June. Faith immediately reopened as Faith Academy Charter School. Enochville, meanwhile, is the only vacant school RSS has in its inventory. The RSS Board of Education hasn’t decided what to do with the facility, but there are a few options.

District Chief Operations Officer Anthony Vann said a few people have asked about using Enochville Elementary as a temporary place of worship while the district decides what is next for the property.

“We lease some of our facilities now,” Vann said.

Vann said those kind of lease agreements typically outline a few hours a week when the facility would be used on a temporary basis, rather than a group occupying it all the time.

Vann said the system will review how uses facilities as outlined in its new strategic plan. The county has first right of refusal on the property. So, if the district wants to sell the property, it must offer it to county government first.

The RSS Board of Education approved closing Cleveland and Woodleaf elementary schools in 2017. Cleveland was quickly picked up by the county for a library and EMS station. Similar to Enochville, the Woodleaf facility sat vacant and was eventually demolished in 2019. Now, the county is turning that property into a park.

Unless there are plans for a piece of property, Vann said the district may try to sell it with buildings standing because of demolition costs. The budget for a demolition would be about $500,000 at Enochville Elementary.

Demolishing the building also would go through a bidding process and involve consideration of any hazardous materials such as asbestos that require special removal.

“Some sites have underground stage tanks that have to be removed,” Vann said, adding he is not sure if that is the case with Enochville.

Upkeep on the property is minimal. Vann said the district performs seasonal lawn maintenance at the school and the only other activity school is sending maintenance staff to inspect the building occasionally.

Security systems are still set up at the building, and the district maintains insurance policies on the structure as well.

“To my knowledge we have not used it for anything in a few months,” Vann said.

A few items have been removed, but equipment remains stored in the building. It will remain there until there is a decision on its fate.