Kitley hurt as No. 21 Virginia Tech women edge No. 16 UNC in ACC tourney 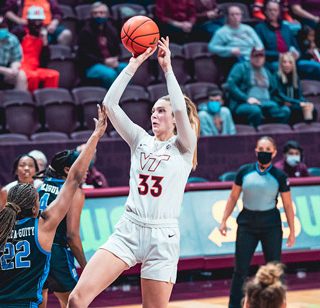 The win — with league player of the year Elizabeth Kitley exiting with a first-half injury — sent the fifth-seeded Hokies (23-8) to the semifinals for the first time since joining the league for the 2004-05 season. They’ll next face third-ranked North Carolina State, the top seed and two-time reigning champion.

The 6-foot-6 Kitley was hurt when she dove for a loose ball in the final second of the first quarter, then came up grabbing her right shoulder after UNC’s Kennedy Todd-Williams fell on her in the scramble.

Kitley returned briefly in the second, then exited for the locker room and spent the second half cheering on her teammates from the bench. Afterward coach Kenny Brooks said the team was being careful with Kitley with the NCAA Tournament looming, though Kitley was having pain raising her arm and her status is unclear.

Asked if he’d shut down Kitley for the rest of the ACC Tournament, Brooks said: “We’ll wait and obviously we’re going to decide. We’re going to be cautious with Liz, very cautious with her. I can’t listen to her because she’ll want to play.”

The fourth-seeded Tar Heels (23-6) forced overtime with a perfectly executed inbounds play with 2.3 seconds left, with Carlie Littlefield throwing to Alyssa Ustby, who whipped the ball to the far wing for Eva Hodgson’s buzzer-beating 3-pointer.

Ustby and Deja Kelly each had 18 points to lead UNC, which arrived with aspirations of strengthening their postseason resume to host a set of opening-round NCAA Tournament game. The loss dropped coach Courtney Banghart to 0-3 in ACC Tournament games.

Virginia Tech shot 51%, including 11 of 29 from 3-point range. The Hokies played without starting guard Cayla King, who suffered an ankle injury Wednesday against Clemson.