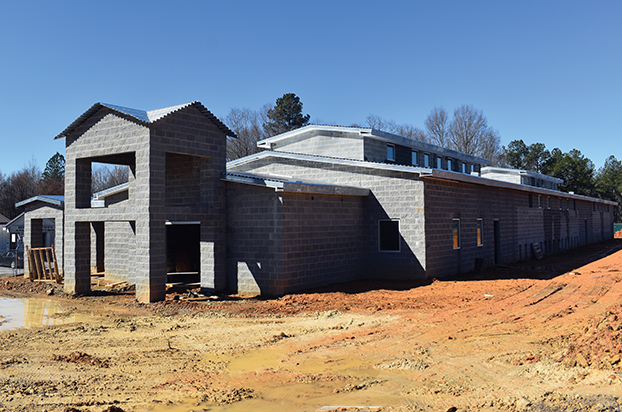 The Nina Dix Dog Adoption Center is expected to be finished in June, barring any unforeseen delays. Ben Stansell/Salisbury Post

SALISBURY — Walking between concrete block walls of the unfinished building, Nina Dix is quick to point out architectural features that will make the structure a perfect place for dogs.

She mentions the building’s 42 kennels separated into four sections, which will help reduce the spread of germs between animals. She highlights the spacious visitation rooms and high ceilings that let in plenty of light.

Every detail of the building, Dix said, has been designed with dogs in mind.

“It’s geared more around adoptions and volunteers and getting (dogs) homes and all of that,” Dix said. “The way it should be.”

The Nina Dix Dog Adoption Center was a dream for so long, but it is finally becoming a tangible place. Walls have been erected, door frames installed and a sub-roof has been placed on top. If everything goes according to plan, the center will be complete in June.

Shelter Guardians, a nonprofit organization dedicated to supporting the animals at the Rowan County Animal Shelter, initiated construction of the building. The roughly 11,600-square-foot center is being built next to the animal shelter and will be donated to the county upon completion. The center will primarily house dogs available for adoption.

Jon Palmer is the architect of the building and Chris Bradshaw is the contractor overseeing its construction. The center is named for Dix, co-founder and president of Shelter Guardians, who spearheaded fundraising efforts to make the project viable.

The initial cost of the center was estimated to be about $2.1 million before increasing to $2.3 million. The price tag has inflated to a little more than $2.4 million due to rising costs of materials. For example, insulation for the building has increased from about $15,000 to $55,000 over the previous several months. 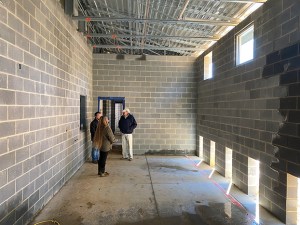 Shelter Guardians has raised enough money to finish the project, but the organization is still accepting charitable donations. All money donated will go to support the center and the dogs at the Rowan County Animal Shelter, Dix said. One man has pledged to grow a rose garden outside.

More information about Shelter Guardians can be found online at shelterguardians.org.

Material delays have also slowed progress on the project. The tin roof for the top of the building arrived Monday, several months after it was ordered. Once the roof is installed, interior work can begin in full force.

The front of the center will house several visitation rooms to give potential adopters a place to interact with a dog they are considering for adoption. Most of the visitation rooms have two doors: one that provides access from the reception area and another that connects to the kennels, which will minimize unnecessary contact between dogs and the public.

The kennels are separated into four sections on both sides of the building surrounding the “center core,” which houses a laundry room, grooming space, kitchen, offices, break room and other support infrastructure.

“All of that has been confined to the center to support the kennels on either side,” Palmer said.

None of the kennels face one another, preventing aggressive dogs from intimidating more timid canines.

“It’s a different atmosphere to what there is now,” Dix said.

One section of the kennels is specifically for dogs recovering from a procedure. A glass window will give staff members a way to check in on the animals.

Each of the kennels will have outdoor access to allow dogs to get some fresh air. There will be an outdoor play area where dogs can stretch their legs. Dix dreams of installing an artificial turf dog park outside the center, but that’s a project she’ll tackle later.

Eight storage nodes located strategically throughout the building will provide space to store equipment. A large, airy room in the middle of the center will serve as a surgery center, an upgrade from the small space currently used at the shelter for spay/neuter and other procedures.

A fenced-in dog intake area will be built outside the center under an awning. The center will be separated from the Rowan County Animal Shelter by several dozen feet and a fence, but Bradshaw said there are plans to ensure connectivity between the two buildings.

Dix said the goal is to provide the county with a facility that won’t be a financial burden. The heating and air conditioning system being installed will be low maintenance, meaning the county shouldn’t need an outside contractor for repairs. Fiberglass door frames should hold up over time, preventing the county from having to replace them any time soon.

Even though there is more work to be done, Dix is happy with what has been done so far. She can’t wait to see the end result.

“It’s going to be beautiful when it’s finished.”