High school basketball: Stout-hearted Hornets get through the first round 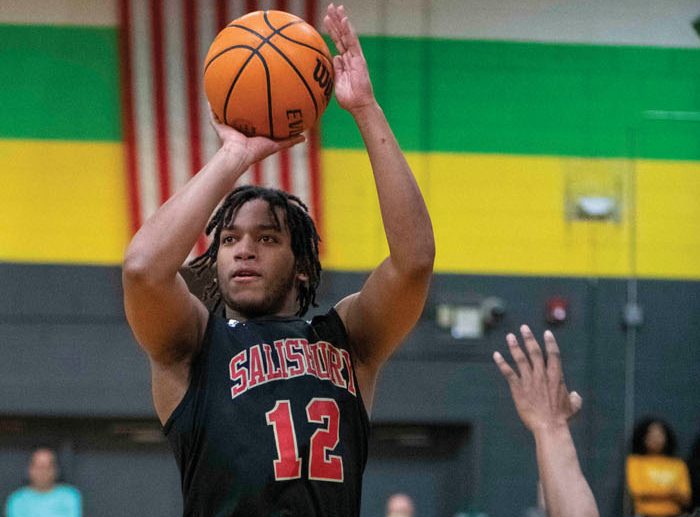 SALISBURY — Reidsville’s Rams brought sharp elbows, wiry bodies and a warrior mentality to the Salisbury gym for Tuesday’s first round of the 2A state playoffs.

Every rebound was a scuffle for turf. Every dribble was made under duress.

Composure was challenged. The refs swallowed whistles and let them play. The pep band blared, the student section chanted, the dance team wiggled, the fans went crazy, and the cheerleaders encouraged.

The atmosphere was electric.

“I love it when it’s like that,” Salisbury senior leader Cam Stout said. “It’s a fun game when you’ve got the crowd on your side.”

Playing at home definitely helped. The Hornets survived more than they thrived, but they lived to play again at home on Thursday. With Stout, a 6-foot-2 swing man, showing the way with five 3-pointers and 23 points, the Hornets prevailed 64-58.

“Reidsville wasn’t going to back down from us,” Salisbury head coach Bryan Withers said. “They’re athletic, but they’re not just athletic, they’re hard-nosed. They got up on in our faces and they played us very tough, but even on a night when we weren’t shooting well on field goals or free throws, we found a way. A lot of teams would have gone home tonight. A lot of teams would have lost this game. We’re still playing.”

The fifth-seeded Hornets will play 12th-seeded Trinity, the Archdale school that Rowan fans haven’t seen much of since they had epic scraps with Mike Gurley’s strong West Rowan squads back in the day. Trinity was a textbook pass, cut, screen and shoot the 3 squad in that era. The Trinity Bulldogs (20-5) beat Lexington 55-46 on Tuesday.

As soon as Withers saw the brackets on Saturday, he had an idea what was coming. Salisbury’s 92-90 loss to Reidsville in an incredible game two years ago is the sort of memory that sticks with you.

Reidsville was 10-10 and a No. 28 seed, but Withers knew it still would be a challenging first-rounder.

“I’m sure people looked at Reidsville’s record and started thinking it would be an easy game,” Withers said. “I knew better. I knew it would be back and forth.”

The first quarter certainly was, but a 3-pointer by freshman Bryce Dalton lifted the Hornets to a 19-13 lead at the end of it.

Salisbury’s leading scorer, Juke Harris, a 6-foot-4 sophomore guard who averages nearly 24 points per game, got two fouls early and had to sit.

Stout has seen that happen occasionally It puts the scoring load on his broad shoulders, but he got some offensive help from lefty guard Mike Geter, who drove and darted for 14 points.

“When Juke went out, I wasn’t worried about needing to score more,” Stout said. “My main focus was to keep control of things, to lead us.”

Stout opened the second quarter with one of his 3-pointers for a nine-point lead, but the Hornets still couldn’t shake the relentless Rams.

With Salisbury up 23-21, Geter made a jumper to maintain the lead.

Late in the half, with the Hornets (19-4) trailing by a point, Stout forced a tough shot — he doesn’t do that often — and put up an airball. He redeemed himself with a steal and layup for the lead.

Then Geter got a steal that set up a Harris dunk for a 29-26 edge at halftime.

The Hornets felt OK. Harris only had six points, but they were on top.

“They did a good job of defending Juke,” Withers said. “They’ve got guys long enough — and tough enough — to get up on him. They challenged him.”

There was usually a lot of contact when Harris got to the rim. He didn’t get a lot of whistles. No one did.

Then Harris got his third foul on the offensive end — it appeared to be a pretty convincing flop by the defender — very early in the second half.

That was the critical juncture in the game. Salisbury responded.

Deuce Walker flew in for an offensive rebound that gave Stout a 3-point look for a six-point lead.

Moments later, Stout was making another 3 and the Hornets went up by 11.

Salisbury took a 43-36 lead to the fourth quarter.

Harris knocked down a big 3-pointer in the final quarter and Walker scored on a ferocious drive. Salisbury went up by 12 with three minutes left, but the fight wasn’t over.

Reidsville cut the lead down to four with a flurry of put-backs and steals.

After Reidsville missed a few chances, everyone on the Salisbury side of the bleachers could finally exhale.

Amari Baggett, Cam Peoples and Al Jariq Lee were in double figures for the Rams.

Harris made three late free throws to close the scoring. He finished with 16 points.

Stout was smiling after the game. He’s a veteran who remembers that 92-90 loss to Reidsville. He remembers an inspired Breon Pass dropping 50 on the Hornets.

“Pass couldn’t miss in the second half that night, and we had no answer for him,” Stout said.

This time Reidsville had no answer for Stout.