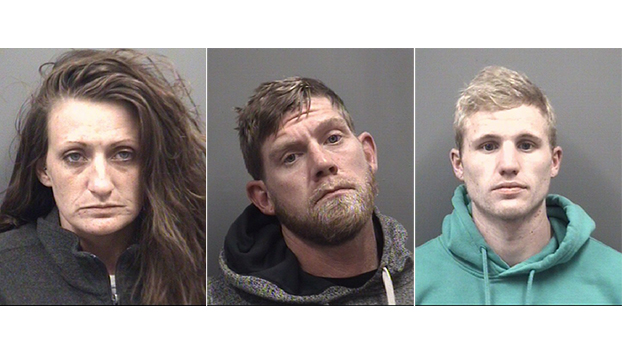 SALISBURY — Three people face charges after a man was found badly beaten and naked with his hands tied in the trunk of a vehicle at a quarry where the borders of Rowan, Cabarrus and Stanly counties meet.

All three people charged in connection with the incident — William Troy Wilson, a 26-year-old Salisbury man, Jackwlyn Nicole Corl, a 33-year-old Rockwell woman, and Thomas Dax Llewellyn, a 35-year-old Salisbury man — face charges of robbery with firearms or other dangerous weapons, conspiracy to commit robbery with dangerous weapons and assault with a deadly weapon with intent to kill.

Their alleged victim was found by the East Gold Hill Fire Department on Thursday at a quarry in northeast Cabarrus County. A 34-year-old man was “severely injured” and naked with his hands zip-tied in the trunk of his own vehicle, the Rowan County Sheriff’s Office said.

The victim was transported to Atrium Health Cabarrus with facial fractures, a broken sternum, a small brain bleed and lung issues. The Sheriff’s Office said the victim tried to sell Corl a gun and was robbed. The victim reported falling asleep, seeing trees and hearing voices, including the names of his attackers.

Hours after the victim was found, sheriff’s deputies on Thursday night were called to a house in the 1300 block of Oliver Road where Corl was living, which is in the Gold Hill area, and found a strong odor of bleach as well as bleach marks in the living room and down the hallway into the home’s master bedroom. In the bedroom, deputies found a large blood spot. Rags and towels covered in bleach and blood were in a basket in the laundry room, the Rowan County Sheriff’s Office said.

Wilson and Corl were booked into jail with a $150,000 bond. Llewellyn received a total bond of $155,000 for also violating probation.

Developers on the same team after competing for Empire…