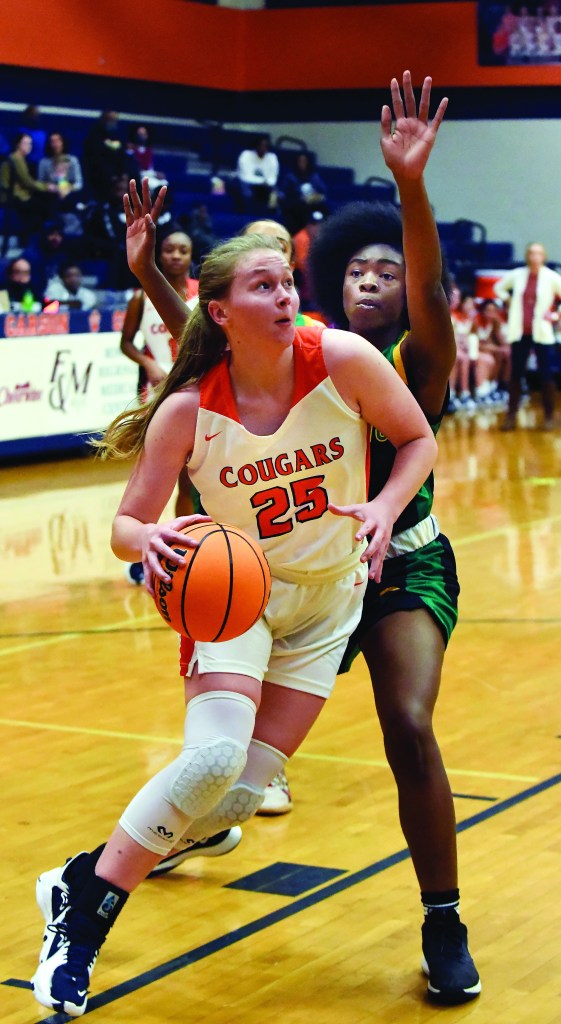 CHINA GROVE — It was a banner night for Rowan County girls basketball.

Spry, a Catawba-bound senior, was as good as anyone. Her 29 came on 8-for-14 field-goal shooting and 12-for-14 at the foul line. She had 10 rebounds and blocked four shots against a good team.

Without Spry’s huge night, the Cougars would have been in a scrap with Lake Norman Charter. But the 6-foot lefty dominated, and Carson rode her to a relatively easy 61-46 victory to stay on top in a tough South Piedmont Conference race.

“Just a really solid win for us,” Carson head coach Brooke Stouder said. “Mary was great, especially in the first half when she had 16 points and made a lot of free throws. As a team, we rebounded better and we defended better than we have in recent games. And we stayed out of foul trouble. That’s been a trouble spot.”

Lake Norman Charter (6-4, 3-4) beat West Rowan, so none of the Cougars were taking the Knights lightly.

“They’re very dangerous, capable of beating anyone in our league,” Stouder said. “But we were execeptionally composed tonight. We executed the plan. We attacked the basket.”

The Cougars settled it with a 20-point third quarter, while holding the visitors to 11.

Lake Norman Charter’s scorers got their points, but their shooting percentages were low, which said good things about Carson’s defensive intensity. LNC’s senior standout Marissa Sorvillo scored 19 on 6-for-17 shooting. Jade Taylor’s nine points came on 4-for-13. Brooklin Leak got eight on 3-for-10 accuracy.

Camden Corley had eight points and three steals for Carson. Hannah Isley was held to six points, but yanked down 10 rebounds.

Spry was the only Cougar who scored in double figures, but her career-best effort was enough.

This is the homestretch, the last hurrah for what has been a fantastic girls basketball program, a program that went undefeated and won the 3A state championship last season.

Seniors scored 58 of Carson’s 61 on Tuesday. Two of the team’s seven seniors were coaxed out of basketball retirement for one last run.

This group may have one more conference championship in them, and if Spry stays in attack mode, they could win some playoff games.

The Cougars (14-3, 7-1) have won five in a row and are in first place in the SPC.  A huge game looms for Carson on Saturday afternoon at West Rowan.

High school basketball: 29s for Phifer and Rymer, as…