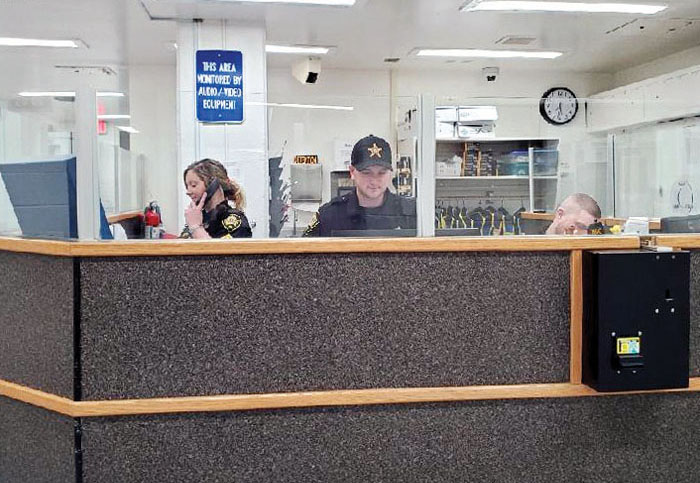 SALISBURY — For Sgt. M. Hare and officer W.E. Ray, there’s much more to working at the Rowan County Detention Center than crime and punishment.

Hare, who’s been with the agency for about 15 years, and Ray, a longtime corrections and law enforcement officer, say it’s important to treat inmates humanely as they await a final verdict on their case or serve time. People are more than their mistakes, Hare said.

“Firm but fair,” Hare said during an interview last week at the detention center.

Other traits important for detention center officers include leaving anger at home, having a thick skin and maintaining a desire to make a difference. To get respect, you have to give it, Hare and Ray say.

They’re just some of the characteristics the Rowan County Sheriff’s Office is looking for in applicants as it copes with a shortage of officers at the jail.

While there have generally been three or four detention center openings at a time, the COVID-19 pandemic has created new gaps between budgeted staff and the number of people on payroll, said Capt. Greg Hannold. Roughly 15 of the 70 detention center positions, which include administrative staff, are unfilled. When officers are home sick with COVID-19, that creates new gaps to fill, too.

“When our society became locked down, we stopped receiving applications,” Hannold said. “We used to replace officers pretty quickly with qualified individuals. Now, we are struggling to find people who want to work.”

The Rowan County Detention Center isn’t unique in the community — where employers of all types need new staff — but Hannold says the nature of working at the detention center is one factor that makes it harder to find new recruits.

“If someone can make the same money or more and not work with inmates 12 hours per day, they will likely choose to do that,” he said. “Although most of our inmates are good people who have made a bad decision, there are some bad people in here and that makes for an interesting work environment that not just anyone can handle.”

The shortage has a “tremendous trickle-down effect,” Hannold says. Because there’s a minimum staffing level required at the jail, civil deputies, patrol deputies, bailiffs and detectives have been asked to take shifts in the detention center. Deputy B. Clement was one such deputy on Friday, helping in the booking area.

“Pulling them away from the jobs they have increases their already heavy workload, putting them further behind in an already fast-paced schedule,” Hannold said. “It requires other officers in their divisions to work harder to keep up.” 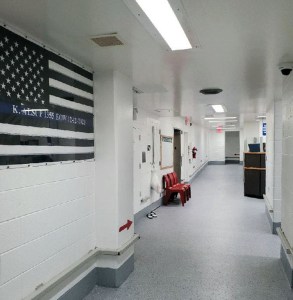 The hallway at the entrance to the Rowan County Detention Center in downtown Salisbury. The thin blue line flag at the entrance is a memorial to Kara Alsup, who died in 2020 while driving home. Submitted photo.

But pulling officers from elsewhere is a necessity amid the shortages because, Hannold says, “Maintaining the jail is a constitutional obligation of the sheriff, and some other responsibilities we happily provide are not. We simply cannot shut down the jail.”

Rowan County isn’t alone in its shortage of detention center officers. The Mecklenburg County Sheriff’s Office was told in December to reduce its jail population because of “significant safety concerns around staffing shortages,” the Charlotte Observer reported. About 30% of the positions Mecklenburg County jail positions were vacant in December, the Observer reported. In November, Triangle-area CBS affiliate WNCN reported nearly half of Cumberland County’s detention positions were unfilled. Wake County had a 43% vacancy rate in November, WNCN reported.

Another reason for detention shortages: the ongoing political and social climate keeps people away from law enforcement who might otherwise be inclined to do so, Hannold said. Meanwhile, people interested in a law enforcement career rarely think about the detention center, he said. Retirement, incentives and benefit accrual for patrol deputies, investigators and others on the “enforcement side” also are better because of state and county policies, he said.

Some of the incentives include:

• a voucher system to help with boot purchases.

• attendance incentives as well as rewards for contraband found in the facility.

• officer of the month and year incentives.

Hare says she enjoys the job because she feels like she’s making a difference to reduce recidivism and to return productive people to society. She also spoke positively about the detention center’s leadership and service opportunities outside of work hours.

For those thinking about a career in law enforcement, Hannold said the detention center encourages camaraderie, good work ethic and service to the community.

“Be a part of the improvements taking place,” he said.

For more information about jobs at the Rowan County Detention Center, visit rowancountync.gov/376/Job-Opportunities.