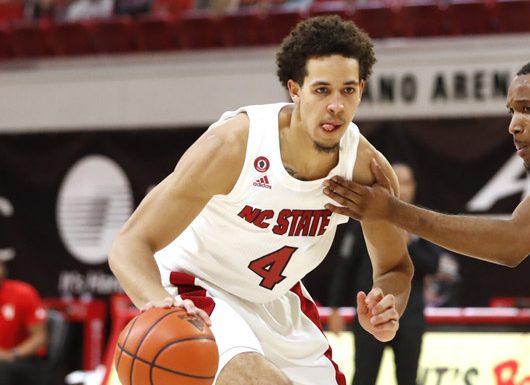 File photo courtesy of ACC — Jericole Hellems helped lead the Wolfpack to the first victory over the Cavaliers in Raleigh since Feb. 21, 2009.

NC State last beat Virginia in Raleigh on Feb. 21, 2009. The Cavaliers had won seven straight at NC State over that span and Virginia coach Tony Bennett had been 14-3 against the Wolfpack.

The score was tied at 29 before North Carolina State closed the first half on a 14-3 run that was paced by three 3-pointers from Hellems and another by Smith. They combined to make nine of NC State’s 12 3-pointers, Hellems making 5 of 9 and Smith 4 of 7.

Morsell, a former Virginia player, scored the first five points of the second half for NC State and the Wolfpack were soon ahead by 15. Seabron made 3 of 4 free throws in the next couple of minutes and NC State led 53-35 with 16:42 remaining.

Virginia missed 16 of its first 22 shots in the second half and trailed 72-51 with 5 minutes to go. Meanwhile, the Wolfpack were shooting 60% in the second half, slightly below the 64% they made in the first half. The Wolfpack finished at 60% overall and made 12 of 22 3-pointers.

Solid first-half shooting helped Virginia finish at 42% overall and the Cavs made 10 of 17 3-pointers.

Virginia has a home game against Louisville on Monday and NC State plays at Notre Dame on Wednesday.