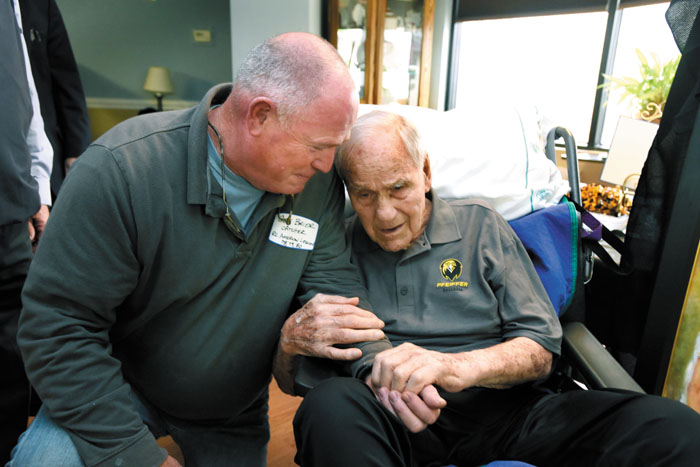 “But sometimes Coach would have to stop practice, so we could retrieve some baseballs from the trees,” Brier said with a laugh. “We had one heck of an offensive team.”

For years, the record number of homers hit by the Salisbury/Rowan County Legion team was the 20 longballs credited to the state runner-up 1968 team.

That sudden surge in firepower wasn’t solely due to Brier — Kelly Gordy, among others, also turned in incredible seasons — but Brier, a sturdy, 6-foot-2 catcher, stood at the forefront of a fearsome assault on pitching staffs.

When they informed Brier there was no way he could duplicate that awesome feat in 1980, he knew what to do for an encore. He went out and hit 22 more.

And he was no all-or-nothing slugger, who fanned when he didn’t connect. He made contact. He batted .354 for his three Legion summers.

While interest in Rowan County American Legion baseball has stood the test of time, so has Brier’s impact on the record books. He still holds four major ones. Besides the 22 homers in a season, there’s RBIs in a season (81 in the summer of 1980), career RBIs (172) and career homers (43).

Fans who are old enough to remember his prodigious clouts would place Brier on the Mount Rushmore of Rowan County Legion players.

Certainly he is the program’s greatest slugger.

That means he has turned 60, but when the name “Coe Brier” comes up in a restaurant in Salisbury, more people still think of the strapping teenager who rocketed balls over the fences at Newman Park than of the sucessful builder and renovator of custom homes that he became after the cheering stopped.

Ask Brier what he does for a living and he’ll modestly answer with a single word, “Construction,” but he has the hands and the soul of a skilled carpenter, so the homes he builds are works of art.

Brier is coming home soon to Salisbury for the First Pitch Field of Dreams, the sold-out fundraising event for the Catawba College baseball program that has been rescheduled for Newman Park on Feb. 12.

Yes, it will be outside, and that’s an iffy proposition in January, but everyone has their fingers crossed for favorable weather for the 5 p.m. Tailgate America Picnic behind the outfield wall and the  6:30 p.m. “sneak peek” at the renovations taking place at Newman Park.

Speakers will come along after the Tailgate and the sneak peak. Brier has no plans to speak.

Brier goes way back with David Bennett, the keynote speaker for the First Pitch Field of Dreams, back to when they were both at Clemson in the early 1980s, and he is well aware you probably don’t want to speak after Bennett or before Bennett. Bennett, former Catawba head football coach, among other things, is one of the greatest speakers of all-time.

But Brier will be there, mostly to see old friends in Salisbury.

And he’ll meet some new ones. There will be current players there who just want to shake his hand. They’ve heard the stories about one of the legends of Newman Park.

One such story was told to the late Ed Dupree long ago by Brier’s teammate, Rowan County shortstop Shane Bolton.

“When Coe hit a home run, it was truly a spectacle to behold,” Bolton said. “When Coe crushed them, the initial reaction of fans was to inhale. This would be followed by a pause and then everyone would just start screaming. There simply wasn’t any doubt about it. It was beyond gone.”

Bolton said Rowan players had knots on the top of their heads from banging their heads on the roof of the dugout.

Players would involuntarily jump straight up whenever Brier hammered one. They knew better, but they couldn’t help themselves.

“I am certain humans are not supposed to hit balls that far,” Bolton said. “Especially not teen-aged boys.”

Brier whacked only four homers his first year of Legion ball. That was in 1978 when he was playing left field. But he’s sure one of those 1978 homers was the longest he ever belted.

“It went dead center field at Finch Field in Thomasville,” Brier said. “It was 420 to the fence and it went over the flagpole and hit out on the street. So maybe 480 or 500 feet.”

Rowan County’s 1979 and 1980 Legion teams were state runners-up, with Rowan outscored by the Franklin Stubbs-led Hamlet team in 1979 and by Wilmington in 1980, but most of the Legion memories are sweet for Brier.

“Newman Park was always such a special place growing up,” Brier said. “I remember getting to bat three times against Benny Callahan (a Catawba star who reached the majors) in a scrimmage when I was still in high school at Salisbury. Great people and great baseball in Salisbury, and there’s no place quite like Newman Park under the lights. I don’t know how many the park actually held, but there were nights you’d look out there, with the roped-off areas going down the foul lines, and, as a kid, you were sure there were 5,000 people in the stands cheering for you.  And I remember our team always standing at attention on the base line until Dr. (Clyde) Young had played the very last note of the Star-Spangled Banner. That sticks with you.”

Brier was drafted by the Cincinatti Reds in the 23rd round in 1980, the 588th pick, but he didn’t think seriously about signing out of high school.

“I knew I wasn’t ready, and the Reds still had Johnny Bench catching for them,” Brier said. “He was my favorite player, and I didn’t think I’d be putting him out of a job anytime soon. A full ride to college to play baseball seemed like a lot smarter option.”

His college decision came down to UNC, Florida State and Clemson. He picked Clemson, partly because legendary Clemson coach Bill Wilhelm had grown up in Rowan County.

The homers didn’t come in bunches for the Tigers, the way they had in the hitter’s paradise of Newman Park, but he played in huge ACC games and hit seven homers for the Tigers in two seasons.

In the summer of 1982, Brier played in a summer collegiate league in Virginia — the famed Valley League. He broke the league RBIs record.

Brier came to the plate in the fifth inning on the final day of the regular season, needing three RBIs for the record. With runners at second and third, an intentional pass was ordered, but in true storybook fashion, a pitch was thrown too close to the plate. Brier took a swing at it. He hit an opposite-field homer over the right-field fence to get the record.

MLB once held a draft of newly eligible players in January, as well as the standard one in June, and Brier, who had turned 21 in November 1982, was eligible to be picked in January 1983. The Minnesota Twins used their first pick on him. He was the 20th player drafted.

He played the 1983 minor league season in the Class A Midwest League. He swatted four homers for the Wisconsin Rapids Twins, but that’s where the baseball journey ended.

Fortunately, the business world proved to be as good to him as the fans at Newman Park once had been, and Brier had learned how to do a lot of things the right way from Ferebee, who always taught more than baseball.

Brier recalls Ferebee was famous for sticking with his starting pitcher long after every fan at Newman Park demanded a call to the bullpen. As the catcher, Brier often wondered why a hurler was being left in the game so long when he obviously was tiring and struggling.

“Coach Ferebee wanted to give those pitchers a chance to find out what they were made of,” Brier said.

Brier was inducted into the Salisbury-Rowan Hall of Fame in 2012.

American Legion summers have come and gone. Talented players have made their runs at Brier’s records, but they still remain.

Any discussion of Rowan County American Legion offensive giants has to start with Brier.

He’s proud of his longevity, but he’ll never boast about his teenage feats.

“I’m not the one who got Rowan County American Legion started, and I didn’t finish it,” he said. “All I ever wanted to do was add something to it.”