‘Miracle he was able to get out’: Man hospitalized after blaze at South Main Street apartments 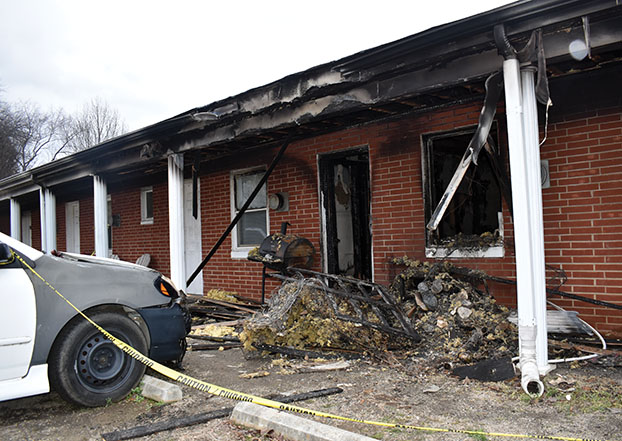 One man was hospitalized with burns after an early morning blaze destroyed a unit at the Foxy Lady. Ben Stansell/Salisbury Post

SALISBURY — One person was hospitalized with burns and several others were displaced from their homes after an early morning fire on New Year’s Eve destroyed a unit at apartments on South Main Street.

Rowan County Fire Marshal Deborah Horne said multiple fire departments responded to a blaze after 3 a.m. Friday morning at the building, which is located at 4939 S. Main St. in the Locke Fire District. The apartments are next to the Foxy Lady. The fire itself was contained in about 15 minutes and its spread was limited.

“It was a great response by the fire departments,” Horne said. “Even the residents were shocked at how fast they got there and got it put out.”

The man living in the singed apartment suffered burns and was transported by Rowan County Emergency Services to Wake Forest Baptist Hospital in Winston-Salem. The victim was in stable condition when Horne spoke to him via phone on Friday around noon.

The victim told Horne he’d gone to sleep around midnight after reading his Bible and listening to gospel music. He was awakened a few hours later by his cat to see his nightstand on fire. The man attempted to extinguish the fire himself, but he was unsuccessful and the blaze quickly grew. The last thing he remembered, he told Horne, was screaming for help from inside his apartment. The victim, a military veteran, was found outside of the unit by a neighbor.

“It’s a miracle he was able to get out,” Horne said.

The cat was spared in the blaze. No other people were injured.

The fire itself is still under investigation, but Horne said it appears there were a few items on the nightstand that could have ignited.

Although the fire primarily damaged the single unit, Horne said neighboring apartments suffered smoke damage. The apartments share a common attic. Duke Energy was forced to cut power to the apartments and eight units remained without power as of Saturday evening.

Anyone interested in helping the residents can call 1-800-REDCROSS.