Hawaiian connection: ‘Aloha’ started it all for couple at Trinity Oaks 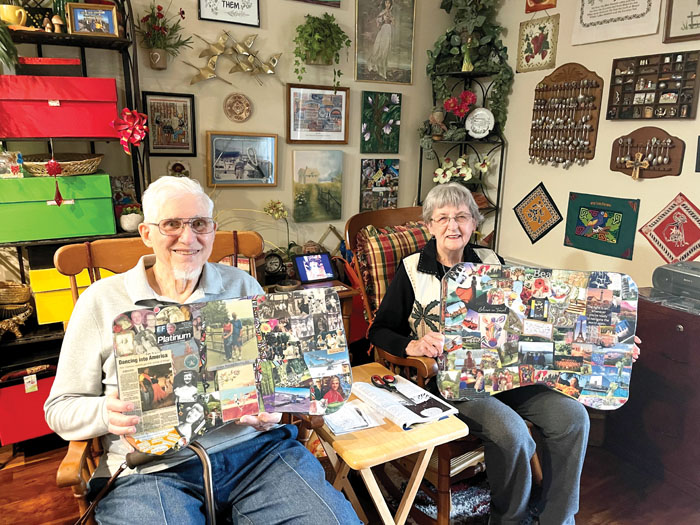 Bill and Bea enjoy spending time in her apartment. They are displaying lap boards Bea made. She is also an accomplished seamstress. Photo by Susan Shinn Turner, for the Salisbury Post.

Both residents at Trinity Oaks apartments, they had a commitment ceremony on Sept. 3, 2020, both dressed in Hawaiian attire. More on that later.

They’re both keeping their apartments.

“This works,” Bea says. “We both like our alone time. And he doesn’t have room for my sewing machine!”

(Don’t tell Bea I said this, but every nook and cranny of her one-bedroom apartment is filled, mostly with sewing supplies. A talented seamstress, her specialty is aprons.)

They met during a first-floor meeting. They live on the same hall but on different wings.

Bea found out Bill was from Hawaii — one of her favorite places to travel. More on that later.

They started saying “Aloha” to each other when picking up the mail. Bea was intrigued. 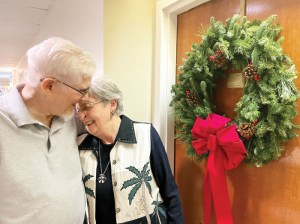 Bill and Bea get tickled when asked to share a kiss outside her apartment. Photo by Susan Shinn Turner, for the Salisbury Post.

One day, Bea was trying to plant to dianthus, and realized she needed holes dug.

“The first guy I see who’s upright, I’m gonna ask,” she thought to herself.

Before long, she heard, “Aloha!”

They dug three of the six holes and took a break halfway through. Bea is 88, seven months older than Bill.

And they had more talks, and soon decided they wanted to be together.

Bea and Bill both say they’ve been lucky in love twice.

Bea and her first husband Lester, a civil engineer who worked in the brick industry, were married in 1952. When the last of their three sons finished school, Bea started traveling, and then leading trips. There’s really not a country you can name that Bea hasn’t visited, and she went to Hawaii every chance she could.

They both lost their spouses about the same time in 2016. Bill didn’t want to live alone in a large house, so he moved to Trinity Oaks in 2019.

“I had worked in Salisbury 30 years ago,” says Bill, a retired electrical engineer with 37 years of service with Duke Energy. “It was like coming back home. I had no idea I’d meet somebody.”

But meet they did.

If you look up the word for “love” in Hawaiian, it is, you guessed it, “Aloha.”

Wishing much aloha to Bill and Bea.