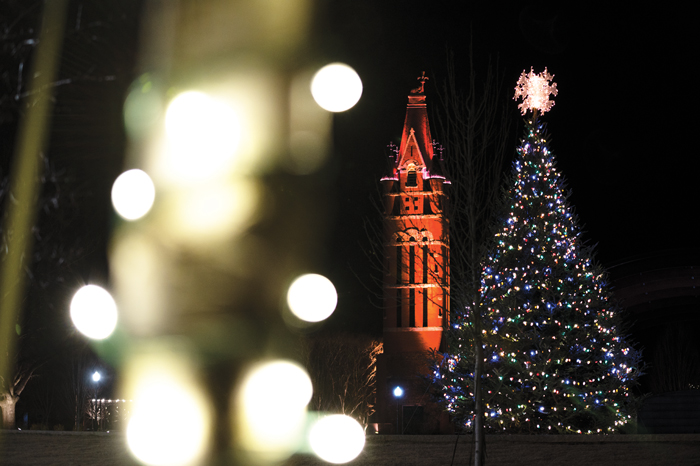 Josh Bergeron / Salisbury Post - A large Christmas tree sits at the edge of the green in Bell Tower Green Park. With the right line of sight, it sits in front of the Bell Tower.

SALISBURY — While the city this year installed a Christmas tree at Bell Tower Green Park with help from the Todd Steinman family, the facility’s proprietors are working with city staff to plant a year-round evergreen tree.

Stephen Brown, the city’s arborist and landscape architect, coordinated with Sugar Mountain Nursery in Newland this year to find the right tree to serve as the first Christmas tree at the new downtown park. Sugar Mountain Nursery is a family business that was launched by Vietnam War veteran and experienced farmer Wayne Holden in the 1970s.

The nursery selected for the city a Fraser fir measuring just a couple inches short of 22 feet. The Fraser fir is a type of evergreen coniferous tree also coined “the Cadillac of Christmas trees.” Such trees typically measure up to 50 feet tall but can reach up to 80 feet, with a typical trunk diameter around 1.5 feet. It’s native to the Appalachian Mountains in the southeastern U.S.

Brown traveled to Newland to pick up the tree before the coordinated effort among city staff to erect it at Bell Tower Green Park during the Holiday Spectacular last month. Among the events that night was the lighting of the tree, which was donated by the Todd Steinman family.

Vivian Koontz, the events coordinator for the city’s Parks and Recreation Department, said both the city’s public works department and fleet crew used the city’s crane truck to hoist the tree in the air and put it in place. They used straps to guide the tree as it was lifted, and bucket trucks were used to string the lights around the tree. Members of the Bell Tower Green maintenance staff constructed the wooden tree box around the tree. Regular maintenance includes weekly watering and ensuring it’s still sturdy in place.

But city staff are currently looking at options to permanently plant and install an evergreen tree in the park. Jason Walser, vice president of the nonprofit Bell Tower Green, Inc., told the Post Brown has helped identify some potential sites for the tree, which would be integrated with landscaping that properly blends with the park.

Walser said the particular species being discussed is a Norwegian spruce, which is another evergreen coniferous tree native to Europe that can grow up to double the height of the Fraser Fir. While plans are still tentative, Walser said they’re aiming for a final decision in the spring, which is also when the tree could be planted.

“We’re encouraging that cause we think it’ll be a good thing,” Walser said. “Bell Tower Inc. thinks it’s a great idea and would love to see an evergreen.”