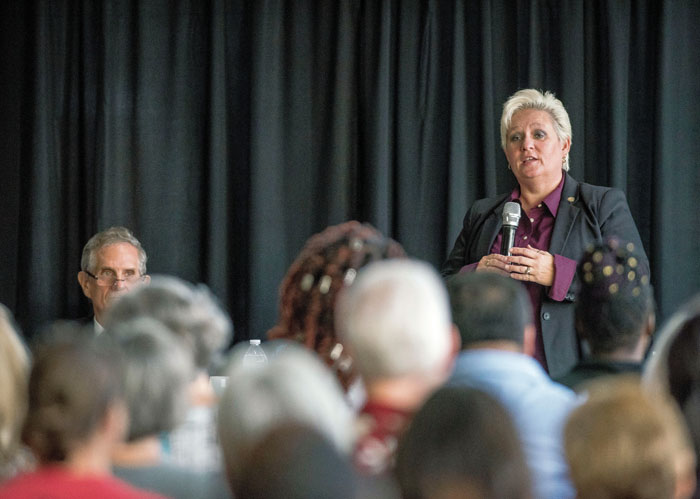 SALISBURY — While the newly elected Salisbury City Council anticipates naming Tamara Sheffield its mayor pro tem after she received more votes than any candidate, Sheffield says it’s still something worth outlining in policy rather than just following tradition.

Sheffield, who has served on council for two terms, finished first after receiving 2,918 votes, 18.01%. Traditionally in Salisbury, the highest vote-getter has been appointed mayor, with the next highest vote-getter appointed mayor pro tem. Since this year’s election featured a separate mayoral race, members of the new council say they anticipate following that tradition for the mayor pro tem.

However, everyone still has one vote. So there’s no difference in the impact of council decisions, Alexander added. In some cases, a council member could be asked to attend such events if the mayor or mayor pro tem’s schedule presents a conflict.

“If that’s the council’s pleasure, absolutely,” Alexander said of Sheffield’s appointment. “I support her being our mayor pro tem. She has always done a very excellent job as a council member.”

Alexander praised Sheffield for being very prepared for each meeting and having a great grasp on budgeting.

Sheffield said she feels a responsibility to have a more involved role because so many voters put their trust in her, especially when the city is “on the precipice of great things.” Sheffield works professionally as an account manager at Pepsi Co’s Frito Lay branch. So, the extent of her involvement and duties will be discussed more moving forward since she’s never served in this capacity, she added.

“I am happy to serve as how the citizens have voted,” she said. “I’m very excited to take on that position. However, that will be a collective vote from council.”

Sheffield said the City Council has been historic in many facets since she was first elected. As for this council being the first one to feature two people of color — Rev. Anthony Smith and Harry McLaughlin Jr., who are both Black — Sheffield said “it’s about time.”

“Diversity in school of thought is what brings our city together,” she said.

Sheffield said she’s frequently been vocal that she’s not a fan of precedent. So, she sees the need to make the mayor pro tem process more formalized in policy. While traditions are up for debate, she said, policies put in more time and effort into making solid decisions.

Smith said Sheffield has always been a powerful and strong champion for the city. Even if it wasn’t tradition, she’d be at the top of his list. Smith said it’s ideal to have someone who has the wisdom, experience and continuity to step as mayor if needed.

“Aside from her identity, it’s also who she is,” Smith said. “So it makes sense.”

Smith agrees that such a process should be codified to eliminate ambiguity or prevent choosing when to deviate from tradition.

Councilman David Post served as mayor pro tem from 2017-19 when Al Heggins served as mayor. Post said the role carries an expectation of being a bit busier than the average council person because mayors can relay responsibilities of making appearances to various events and ceremonies onto the mayor pro tem on the city’s behalf.

“Having been mayor pro tem, you’re more engaged because of that,” Post said.

Post said if Sheffield wants the position there’s no reason not to follow that tradition. He also said he feels everyone who will serve on the new council is capable of serving as mayor pro tem or mayor since “we all represent the city.”

McLaughlin could not be reached for comment in time for publication.