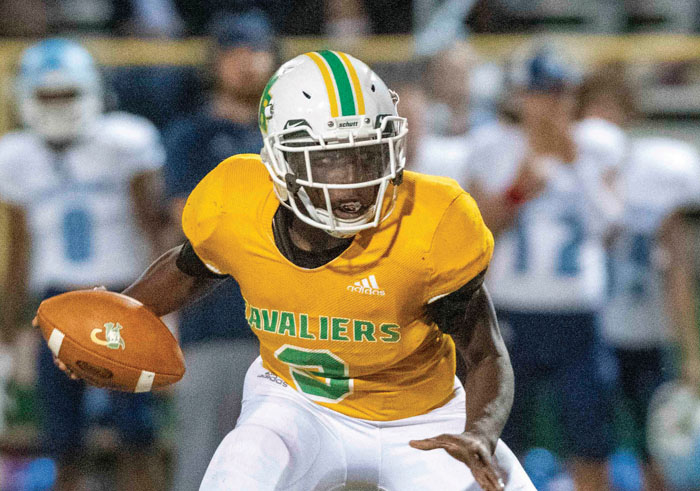 North quarterback Jeremiah Alford threw five touchdown passes, but it was not enough for the Cavaliers. File photo by JON C LAKEY / FOR THE SALISBURY POST

ROBBINSVILLE — Freshman quarterback Jeremiah Alford became the first North Rowan player to throw five touchdown passes in a playoff game, but  the Cavaliers were outscored 50-47 at Robbinsville in a third-round 1A shootout on Friday night.

The Cavaliers couldn’t get it. Robbinsville cranked out more than 500 rushing yards, with sophomore tailback Cuttler Adams  romping for 377 yards and four touchdowns on 42 carries. Kage Williams had 19 carries for 100 yards and two scores.

It was a classic matchup of Robbinsville’s powerful running game, which accounted for all seven touchdowns for the Black Knights, against North’s passing attack.

North made a 225-mile trip to the mountains, but never trailed in the first half and was up 35-21 at halftime in a game played in very cold, but dry and windless conditions.

Robbinsville shut out the Cavaliers (8-4) in the third quarter and seized the momentum.

Adams had scoring jaunts of 60 and 56 yards in the third quarter, as the game turned in favor of the home team.

North got the ball first and scored immediately, with Alford hitting Amari McArthur for a 68-yard scoring strike on the second play from scrimmage.

Robbinsville answered with a 1-yard run by QB Dasan Gross.

Alford threw to Kemon O’Kelly for a 9-yard touchdown and a 21-14 lead late in the first quarter.

Alford’s 9-yard scoring pass to McArthur with 25 seconds left in the half boosted the Cavaliers’ lead to 35-21.

Adams broke his 60-yard touchdown run 50 seconds into the second half.

He scored again nine minutes later on his 56-yard run for a 35-all tie.

When Adams scored from North’s 19-yard line on the first play of the fourth quarter, Robbinsville owned three unanswered TDs and its first lead of the night at 42-35.

McArthur caught his third TD pass of the night with 9:20 remaining to make it a 42-41 game, but the PAT was blocked, and that proved critical.

Williams scored on a 4-yard run for Robbinsville with 6:32 left for 48-41 and a 2-point conversion pass made it 50-41 and gave the Black Knights a two-score lead.

But North couldn’t get the ball back, as Robbinsville successfully ran out the clock.

Alford passed for 248 yards and finished the season with 23 touchdown passes and 15 rushing TDs. The five TD passes in a game tied a school record set by Mitch Ellis in 1994 (vs. Mount Pleasant) and equaled by Mario Sturdivant in 1997 (vs. West Rowan).

McArthur had eight catches for 141 yards and finished with 16 touchdown catches to set a school record for a season. He came in tied with Alfonzo Miller, who had 13 in 1999.