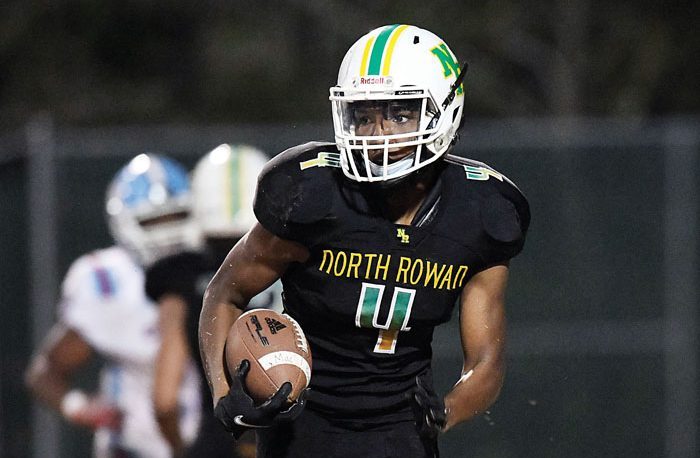 North Rowan's Amari McArthur has been a key receiver for the Cavaliers. File photo by Wayne Hinshaw, for the Salisbury Post

SPENCER — North Rowan cheerleaders formed a tunnel at the entrance of the basketball gym and hoodie-clad receiver Amari McArthur, moving at a much slower pace than he does on the football field, made a grand entrance.

For a high school junior, having two rows of cheerleaders shout for you, just for you, has to be exhilarating stuff, but McArthur was all business. He resisted the urge to grin. He kept his game face firmly in place. He acted like it was third-and-10, tie game, two minutes left.

Tuesday’s ceremony in the gym was attended by, among others, principal Meredith Williams, who swung a mean tennis racket for the Cavaliers back in the day, and Zach Tatarka, who wears the multiple caps of athletic director, P.E. teacher and head baseball coach.

Head boys basketball coach (and assistant football coach) Jason Causby was there, too. McArthur will be starring on the basketball court this winter, but Causby is in no hurry for that.

Lots of family members were on hand. They came dressed in white T-shirts with McArthur’s familiar No. 4 on the back and “The General,” Amari’s nickname, emblazoned across the front.

General Douglas MacArthur’s role in World War II and the Korean War is well-documented in the history textbooks.

North’s “General” hopes to be well-documented in the county as well as the school record books before he’s done.

“I never thought of myself as being a guy who was going to be honored for breaking records,” McArthur said. “But now that I have broken some, it makes me really want to go on.”

McArthur’s mission as a junior was to be more consistent than he was when he was a sophomore.

He’s accomplished that. He’s extremely talented, long at 6-foot-2 and swift enough to be the county track champ in the 100 meters, but he’s also put in the sweat to get better.

“I worked hard to build chemistry with our new quarterback (Jeremiah Alford) in the summer time and I ran a lot of stadium steps,” McArthur said.

McArthur’s 170-yard game against Polk County in the playoffs last spring was a breakout game, a sign of big things to come.

In the second game of the current season, he turned just five catches against North Stanly into three touchdowns and a mind-blowing 273 yards. That performance broke the single-game receiving yardage record for the program and for Rowan County.

“He can out-run you, he can jump over you and he can make you miss,” Pearson said. “When a receiver can do all three of those things, he’s a dangerous man.”

McArthur hasn’t experienced any more games quite like the one that killed North Stanly, but he’s been productive. Against Lexington, he had seven catches for 152 yards and two touchdowns. He had nine catches for 122 yards and a TD against Thomasville.

He caught at least one touchdown pass in each of North’s first eight games.

McArthur had two TD catches in the first round of the 1A state playoffs, bumping his season totals to 46 catches for 1,050 yards and 13 receiving touchdowns. He also owns a punt-return TD and a rushing TD.

The 13 TD receptions in a season tie McArthur with legend Alfonzo Miller for a school record. Miller housed 13 passes from another legend, Mario Sturdivant, in 1999.

The 1,050 receiving yards were the reason McArthur was honored on Tuesday. Pearson handed him an ordinary-looking game ball,  but he promised to replace it with a commemorative ball with an updated yardage total after the Cavaliers finish this season.

McArthur has topped the 1,020 yards Bryson Gaymon had in 2006 when he set the school mark. Daniel Griffith was doing the throwing to Gaymon that season.

Gaymon still owns the career receiving yards record at North with 1,990, but it’s temporary. That record is likely to fall down the road to McArthur, who already has amassed 1,590 career yards.

North has boasted many exciting quarterbacks who put up impressive passing numbers — North was “The Airport” long before spread offenses became fashionable — but the Cavs’  receiving yardage was normally split among two, three or even four pass-catchers. McArthur has been a uniquely dominant target and is on track to be the school’s first 2,000-yard receiver.

In last week’s second-round overtime win by the Cavaliers at Thomas Jefferson Classical Academy,  McArthur was shut out for the first time this season. TJCA put Shrine Bowl pick Dakota Twitty, a 6-foot-5 Virginia commit, on McArthur. He took McArthur away, and North had to find other ways to move the football.

The Cavaliers did. Alford turned in his biggest rushing game of the season. Jae’mias Morrow had two more rushing TDs. Amir Alexander made a game-deciding touchdown catch. The defense got key stops.

“We tried throwing it to Amari four or five times, but the guy they had on him was tough and it wasn’t worth the risk of an interception and a runback,” Pearson explained. “Fortunately, we were still able to pull it out, and we’ll get Amari more involved this week.”

McArthur didn’t make any excuses for a zero-catch Friday. He’s just grateful the Cavaliers won, so he gets to play again this week.

North will be making a 225-mile trip deep into the mountains to play Robbinsville in a 1A third-rounder.

North ventured 197 miles east to play Tarboro in the playoffs when McArthur was a freshman, but this is going to be a steep climb as well as a long ride. Robbinsville is more than 2,000 feet above sea level and the forecast for Friday night is for mid-20s temperatures.

His preference on the head phones is old-school Drake.

His work ethic is also old-school. It’s an approach that is giving him a chance to do great things.

“Amari can do about what he wants to do in football,” Pearson said. “We’ve got a really good freshman quarterback and Amari has been a binkie for him. He’s been a great security blanket.”