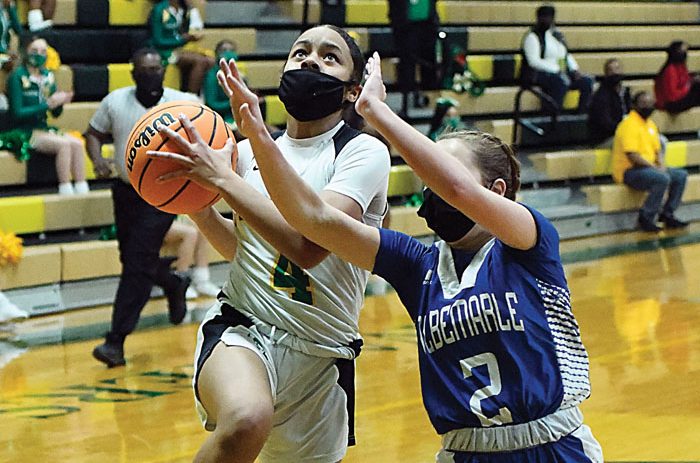 North's Bailee Goodlett (4) will be critical as a scorer and ball distributor for this season. File photo by Wayne Hinshaw, for the Salisbury Post

Fourth in a series of previews on local basketball teams.

SPENCER — Anytime you start three freshmen and win a conference championship, there are a lot of reasons to be excited.

North Rowan’s Bailee Goodlett, Bloom Goodlett and Brittany Ellis are now sophomores. They provide a core class for the present, as well as the future.

Bailee Goodlett is a polished point guard who wasn’t awed by the transition from eighth grade to varsity. She averaged 10.8 points per game.

She’s going to be even more critical as a scorer and distributor this season because North subtracted guard Kamora Cannie, who was on pace for 1,000 career points after two strong seasons in Spencer. Cannie came to North Rowan from Charlotte prior to her freshman year and now has returned to the Queen City.

Bailee’s twin, Bloom, brought a different skill set to the table. Her biggest contributions as a freshman were on the boards and hustling for second-chance points. She’ll be expected to boost her scoring in her second season, and she’s improved her shot.

Ellis, who averaged 7.8 points, hit double figures three times. She can score in a lot of ways and she rebounds and defends well.

North will get a lot of poise and points from Hannah Wilkerson, a senior who already has 1,090 points in the books, even with a shortened junior season. North only played 12 games in 2020-21.

The 5-foot-8 Wilkerson is the active career scoring leader for Rowan girls. Her career high is 34. Her high game last season was 23, as the Cavaliers’ scoring was usually balanced. She averaged 14.7  points last season.

She doesn’t do any one thing that knocks you out, but she does everything well and rarely has an off game. She can play forward or guard and she can score inside, outside or in transition. She’ll get a chance to play college ball.

“She’s put a lot of work in and has improved her quickness, her lateral movement and her shooting,” Smith said. “She’s done so much for the program. Not only a lot of points, but a lot of rebounds. A lot of double-doubles. A lot of leadership.”

Smith expects Kimya Lynch to help in the leadership department. Lynch played quite a bit for North before transferring to Salisbury last season where she was in a reserve role. Now she’s returned to the Cavaliers for her senior season.

She hasn’t been a big scorer in the past, but she’s a tough defender and an aggressive rebounder.

“Her tenacity makes a difference,” Smith said. “She has a willingness to do whatever it takes.”

Junior Chloee Stoner got hurt last season. Her injury shortened North’s bench down the stretch. She’s a solid athlete who also is one of the school’s best at soccer and volleyball.

“To play three sports as well as she does is amazing,” Smith said. “She can shoot and rebound, and she always plays her heart out.”

North will get stronger whenever Dasia Elder makes it back from ACL surgery. She’s been progressing but hasn’t been cleared yet. At 5-foot-10, she’ll give the Cavaliers some height and she can shoot. She had some dynamic games in her days at North Rowan Middle and she won a lot of Elks Hoop Shoot contests.

Smith also is optimistic that Kristal Stockton can become a post presence.

Summer competition was meaningful for the Cavaliers. Everyone improved. North won 12 of 16 games at the Catawba and North Meck camps.

“You can walk in the gym and see a difference in them now that wows you,” Smith said.

North will be playing in a new 1A/2A league. It will be harder to win a conference championship, but not impossible. The realigned league won’t be huge adjustment, as North played Lexington and Thomasville last season in non-conference games.

“We’re excited,” Smith said. “This is still a young team, but these girls are versatile and they play well together.”

North got a brutal draw in the random seeding for last year’s playoffs, catching eventual 1A state champion Murphy in the first round.

With normal luck, North could play a lot deeper in the playoffs this time.

Playoffs: Lost first round to Murphy (1A state champs)