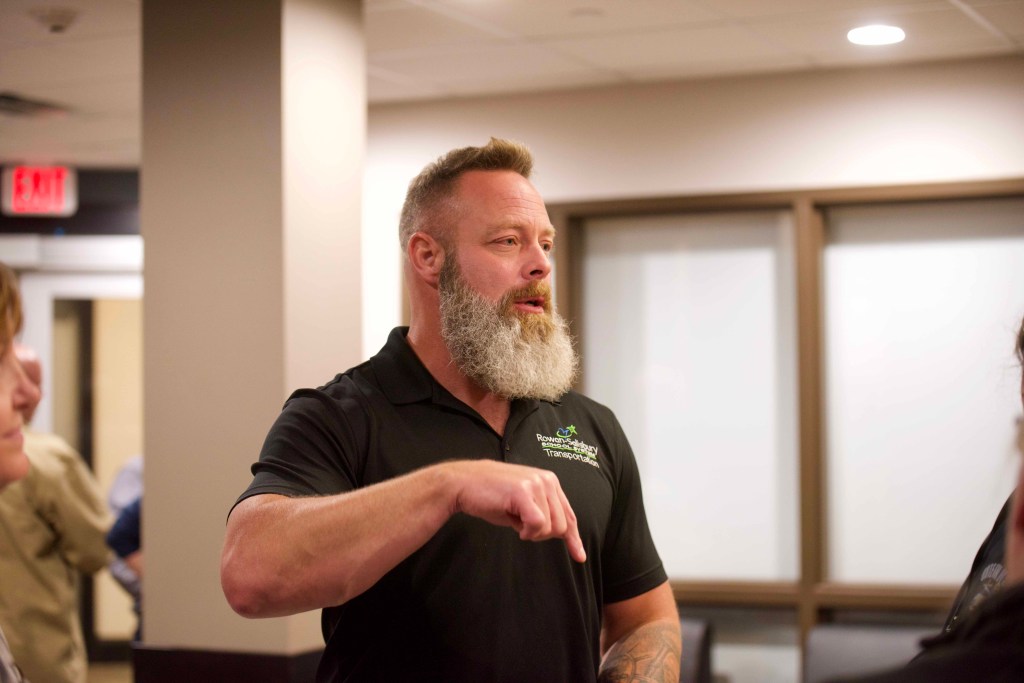 Carl Blankenship/Salisbury Post - RSS Transportation Director Tim Beck speaking to staff in the lobby of Wallace Educational Forum after the school board approved $2,000 bonuses and raises for bus drivers.

SALISBURY — The Rowan-Salisbury Schools Board of Education on Monday allocated millions of dollars in federal funding toward bonuses and pay increases for employees.

The board signed off on $2,000 bonuses for each of the 3,000 employees in the district, regardless of position, to be paid in December. The board also approved pay increases for bus drivers that should result in significant boosts for every driver starting Dec. 1.

The pay changes will increase the starting rate for bus drivers from $12.07 per hour to $16.49 and the top end of the pay scale from $15.35 to $25.39 per hour. The cost to implement the change this year fiscal year is about $700,000. To sustain the increase in later school years, the cost will be about $1.1 million per year. The cost of the one-time bonuses is about $6 million.

The bonuses will be paid through COVID-19 relief money, pending state approval of changes to the district’s spending plan for the money.

The district’s Finance Department will also attempt to draw the cost of the pay increase through federal money rather than Rowan-Salisbury Schools’ fund balance, which is used as a savings account. But RSS Chief Financial Officer Carol Herndon said getting approval for that idea will be challenging.

On sustaining funding, Herndon shared some places the district could find money: a decrease in maintenance costs due to air quality improvements from federal relief money, evaluating district staff allotments, “optimizing” the number of schools the district has and analyzing other non-salary benefit accounts.

In addition to increases approved Monday, the RSS board plans to reconvene this week to discuss pay boosts for school nutrition staff. During a presentation from Herndon and RSS Human Resources Director Jill Hall-Freeman on pay increases laid out in a salary study, the pair said recommendations for nutrition staff could be implemented entirely via department funds.

Herndon also told the school board a proposed budget has made its way to Gov. Roy Cooper’s desk, which could help provide money the district needs to cover pay increases for other classified staff in the pay study. The presentation given to the board previously with the assumption of no state budget being passed. The total cost of implementing the entire pay study year-over-year is about $7 million.

The $2,000 bonus originated from discussions about other districts paying staff bonuses and wanting to do something for classified staff immediately. Several classified staff members spoke to the board about pay increases during the public comment period.

The initial motion for bonuses, made by Dean Hunter, was to pay $500 to all classified staff out of the district’s cash on hand, but Herndon and Hall-Freeman said if the district were to tap into federal relief money for bonuses, it would be cleaner than trying to fund year-over-year expenses with the tens of millions in federal dollars the district has at its disposal.

“If you’re going to swing, swing for the fences,” Hunter said.

Hunter withdrew his motion after some discussion and made the motion to give all staff the $2,000 bonus.

Herndon said there are examples of other districts taking similar measures, and the Finance Department will work tirelessly to implement the motions beginning Tuesday.