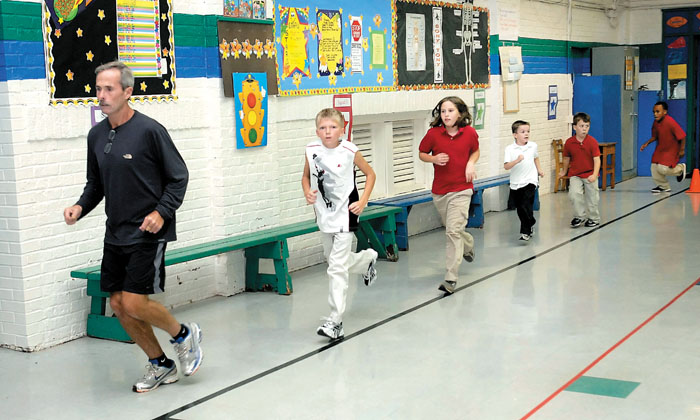 YMCA instructor David Freeze leads a group of Granite Quarry YMCA After School runners at the Granite Quarry Elementary gym in 2008. A 5K has been added to Winterfest in Spencer to honor Freeze. photo by Wayne Hinshaw, Salisbury Post

SPENCER – David Freeze says people have joked about his last name before, but no one has turned it into a name for a run.

A new 5k in Spencer, dubbed “Freeze Your Buns,” sounds like a decent name for a cold weather run in general, but the race is being held in honor of Freeze, a local runner, endurance sports aficionado and president of Salisbury-Rowan Runners.

Even more appropriate is that Freeze, who runs year round, always wears shorts to run. He said the chilly tradition started as a bet between himself and another runner. The bet was to run through the winter in shorts. The other runner didn’t do it. Freeze did, and he’s stuck with shorts ever since.

Organizer Kelly Everhart said the run is meant to honor Freeze because he has done so much for running in Rowan County. Everhart said when he was coaching cross country at North Rowan High School Freeze helped get the school’s trail set up and pushed him along as a coach.

Everhart said Freeze is a friend to the community and an inspiration even to people who do not know him.

Freeze said 5K races are a good jumping off point for runners looking to challenge themselves and get into their first races. He said runners in his beginning classes get to race a 5K at the end of the eight-week class.

“Hopefully, that motivates them to keep doing more,” Freeze said.

The race will start in front of the N.C. Museum of Dolls, Toys and Miniatures  at 2 p.m. on Dec. 4 and end in Park Plaza after runners make a jaunt through the heart of Spencer. Freeze said this is a return to racing in Spencer years after similar runs stopped in the town.

The race is only one part of a long list of festivities that will be part of Winterfest. The inaugural winter festival is sponsored by the town and will take place on the weekends of Dec. 3-4 and 10-11.

There will be an ugly sweater contest, a kid’s parade, music, dancers, a ceremony for veterans, vendors, food and more.

The marketplace area will have lights given in honor of loved ones and the trees on display will be distributed to local families through Communities in Schools after the festival wraps up.

There will, of course, be a chance for photos with Santa and photographer Jacqui Watson will capture professional images.

On Dec. 10, Piedmont Players will perform a mashup of classic Christmas movies.

On the evening of the last day of the festival, local actor and professor Karl Hales will read “The Night Before Christmas” to close out the festival.

More information and a full schedule of events can be found at spencerexperience.org. To sign up for the 5K, go to runsignup.com/Race/NC/Spencer/FreezeYourBunsOff5K.