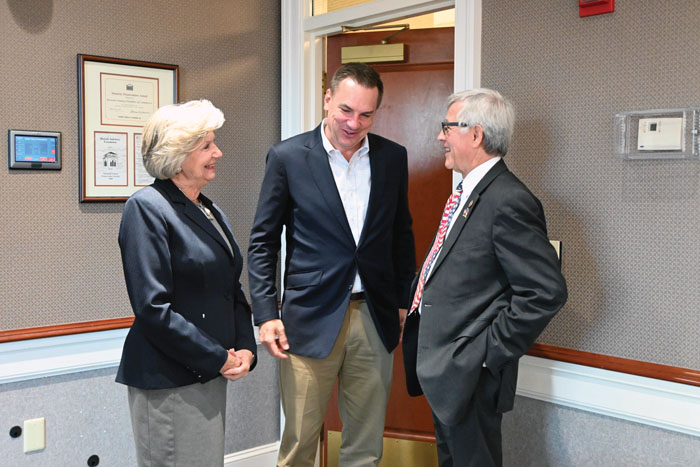 SALISBURY — During a visit back to Rowan County on Wednesday, Rep. Richard Hudson, a Republican who represents the 8th Congressional District, talked about redistricting, the federal bipartisan infrastructure bill and looking ahead in the pandemic.

Terry Osborne, manager for the Rowan-Kannapolis ABC Board, was the primary organizer for Hudson’s visit at the Rowan Chamber of Commerce. Osborne said the event was organized on a short notice following approval of new congressional maps, but he wanted it to be open to anyone with a stake in the county and district. The intent was to update Hudson on the progress being seen across Rowan County since he last visited and was the representative.

“I have a proven track record as a conservative who knows how to get things done,” Hudson said in an emailed statement. “Working together, we can stand up to the radical, big government policies coming out of Washington, D.C., and work on solutions to grow our economy, defend our rights and get our country back on the right track.”

Hudson told the Post his approach has always been that he wants voters to know who he is, what he believes and how he votes. He credited himself with being accessible, which several county and city stakeholders echoed during their remarks to Hudson.

Hudson said the newly drawn congressional districts “make sense” because Rowan, Davie and Cabarrus counties deal with a lot of similar issues, including how to encourage and control growth.

“(It) was important for me to get here as quickly as possible to demonstrate to this community how thrilled I am to have Rowan County back with Cabarrus County,” Hudson said. “I’ve got a record. I’m going to run on my record. I’m proud of my record.”

During the visit, Chamber of Commerce President Elaine Spalding highlighted the infrastructure projects listed on the Chamber’s 2021-22 state priority projects, a “wishlist” of capital projects provided to state lawmakers each year. Included in the list is a request to support the West Parallel Taxiway at the Mid-Carolina Regional Airport to prepare for future development, which is estimated to cost $13.94 million. Other items include lobbying for an East Spencer and High Rock Lake exit at Interstate 85 and McCanless Road and increased broadband access.

Like several others Wednesday, Spalding said she would contact Hudson’s office to discuss how they could support the Chamber’s efforts.

Last week, Hudson joined all eight North Carolina House Republicans in voting against the federal bipartisan infrastructure package that’s estimated to bring $9 billion to the state over the next five years. According to the White House, North Carolina is earmarked to receive up to $7.2 billion for highway programs and $457 million for bridge replacement and repairs, $910 million to improve public transportation, $109 million to expand electric vehicle charging networks, $100 million to expand broadband coverage, $32 million for wildfire protection, $27 million for cyberattacks, $1.1 billion for water infrastructure for safe, clean drinking water and $460 million for airport development. All funding would be received over the next five years, with additional funding available via competitive grants.

Hudson told the Post he’s been vocal for years about the need for infrastructure and would have been in support even if money needed to be borrowed to pay for the package. Hudson said he voted against the measure because President Joe Biden and House Speaker Nancy Pelosi tied the infrastructure package to a larger climate and social spending bill as part of Biden’s agenda.

“And I’m going to try everything I can to stop that,” he said about the social spending bill.

Another reason he voted against the infrastructure bill, Hudson said said, is because more than half of the bill is not considered traditional infrastructure, which he cited to be roads, bridges, airports and broadband. Hudson said the bill was too much like a Green New Deal and that lawmakers could have formulated a “cleaner and smaller” bill focused on “real infrastructure.”

As a leader on the Energy and Commerce Committee’s Subcommittee on Health, Hudson said during his visit that Republicans are meeting to discuss their policy stances. Last week, Hudson vocalized his stance against vaccine mandates for Medicare and Medicaid providers.

“While vaccines are critical to combat this pandemic, mandates without exemptions threaten liberties and undermine access to public health,” Hudson said. “I have heard directly from providers in my community like Cabarrus Health Alliance about how mandates will further create labor shortages and negatively impact patient care.”

Hudson told the Post he supports vaccines, has received the COVID-19 vaccine, plans to receive the booster dose and still believes vaccines are to be the best tool to stop the pandemic. However, he said the role of government should be to encourage vaccinations, not mandate them.

Hudson said that the pandemic has been politicized by both parties. He added that Biden’s failure to acknowledge the accomplishment of his predecessor in Operation Warp Speed to expedite the creation of the COVID-19 vaccines is a reason Republicans are hesitant now.

Hudson said more work needs to be done to expand access for additional treatments to get to the market and potential FDA approval for those who can’t receive the vaccine.