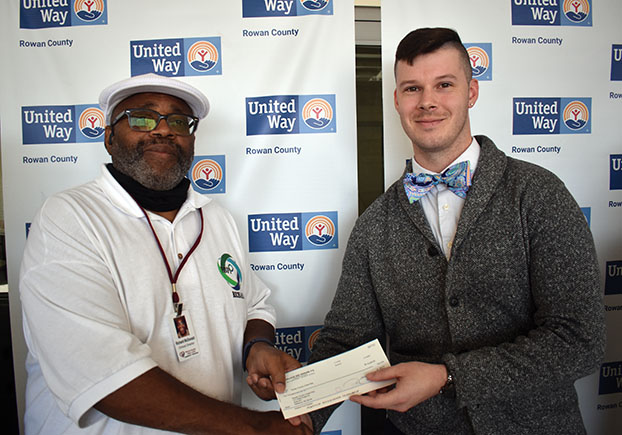 SALISBURY — Jenny Lee will do almost anything for a good cause.

That includes climbing to the top of a downtown water tower where she will “stay” until the Rowan County United Way reaches its fundraising goal of $1.5 million.

“Each year our campaign has started to pickup new energy to it and has gotten creative in how we get people excited about giving and supporting their community” said Lee, United Way’s executive director. “This is just another one of our United Way stunts to get people excited.”

The move is also a nod to the campaign’s motto: “Let it come. Let it go. Let it flow,” which was crafted by Campaign Chair and Salisbury-Rowan Utilities Director Jim Behmer.

Lee announced the daring feat at the United Way’s fourth and final report meeting at Cloninger Toyota on Wednesday afternoon. She plans on scaling the tower sometime next week. While Lee won’t truly be spending her nights on the tower, ascending to the top will be nerve wracking enough given her fear of heights. Lee encourages people to follow along by checking out the United Way’s Facebook and Twitter pages.

The good news for Lee is that United Way has collected $1.06 million thus far, which makes the nonprofit 70.9% of the way to its desired final tally. The objective, Behmer said, is to reach $1.5 million mark by the campaign finale at the F&M Trolley Barn on Dec. 1 at 11:30 a.m.

The best performing division in the campaign to date is community business. Chaired by Cheryl Goins, the division has raised $13,459, which is 103.5% of its goal. The division that has raised the most money so far is special gifts, which is chaired by Elizabeth Cook and has raised $195,572, or 97.8% of its $200,000 target.

The United Way also took time during the meeting to recognize Layla Jones, the 7-year-old entrepreneur who raised $1,000 for the nonprofit through her lemonade stand. While Layla wasn’t able to attend the meeting because she was in school, her father Larry Jones accepted the honor on her behalf.

“(Layla) was very excited about having this opportunity to donate back,” Larry said. “That’s all her focus is, is giving back to the community and helping our area get better.” 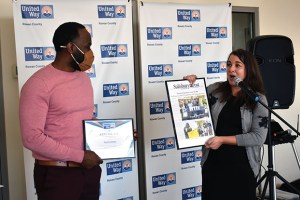 Also announced during the meeting was that the Wallace & Graham law firm donated $10,000 to the United Way’s campaign. The money will fund an initiative administered by One Love Community Services that provides mental health support to veterans.

“We thought that since (One Love) already sees groups limited in resources that they would catch that veteran population,” Lee said. “The most important thing is that they have a veteran on staff who will provide the clinical work, so that from the beginning of their therapy sessions, it develops a rapport or camaraderie between clinician and client that if you’re not a veteran, it could take some time to get past that.”

One Love’s James McGoogan is the veteran staff member who will be responsible for overseeing the program.

Wallace & Graham donated the money through its charitable giving effort, which was launched last year and has already dispersed thousands to local causes. Cory Simpson, who performs medico-legal analysis at the firm, and Whitney Wallace Williams, a partner at the firm, were at the report meeting to present the check to the United Way.

Simpson, who served as a combat medic in Afghanistan, initially brought the idea of the initiative to the firm’s attention.

“Mental health is a pretty big burden on our veterans,” Simpson said. “We, along with United Way, partnered with One Love and we’ve created a mental health initiative for our veterans. We have a combat veteran council that we partner with our veterans that come in for help. Of course this is open regardless of discharge status, financial abilities, things like that.”

The last three finalists for the campaign’s car giveaway were also drawn during the meeting. Tonya Brinegar-German of East Rowan High School, Heidi Judd of West Rowan Elementary School and Joe Lewis of Hitachi Metals will be among the 12 people who have a shot to win a new vehicle from one of the United Way’s dealership partners. The winner will be drawn during the campaign finale.