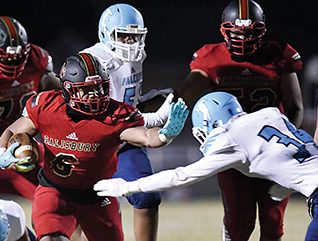 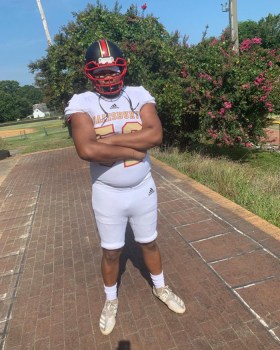 SALISBURY — Chris Green was a starter for the Salisbury Hornets when the long-delayed 2020 season finally got going last spring, but he didn’t finish the season.

Green and SHS head coach Brian Hinson agree that the important thing is that Green returned to the team for the current season as a new man.

He’s been outstanding at left guard and is the Hornets’ most dominant offensive lineman most Friday nights.

“He’s been very good,” Hinson said. “His improvement over the last few weeks has been tremendous.”

At 6-foot-3, 280 pounds, Green has the size to play in college — and the ability. Offers have started to come in from schools such as Culver-Stockton, an NAIA program in Missouri.

“He’s gotten the reps he needed and he has some really good feet,” Hinson said. “Those feet allow him to play at a high level.”

This season began with Salisbury’s offensive line as the weak link on a potentially dominant team. Four starters from the offensive line that shined in last May’s state championship game graduated. Then the only returning 0-line starter, center Bryan Rosado, went down immediately with an injury.

There was the possibility of offensive line angst and flurries of penalties and sacks, especially with Salisbury performing without offensive line coach Taylor Fender.

The former Catawba standout is taking this season off after his wife had a baby.

“He’s Papa Fender now,” Hinson said with a laugh. “But hopefully he’ll be back with us next year.”

After three non-conference romps, the Hornets played highly regarded Thomasville on Sept. 17 in the Central Carolina Conference opener. No one was sure if the Hornets’ offensive line would hold up against the quick Bulldogs.

“No one knew exactly what Thomasville would be bringing,” Green said. “But we were all motivated and we stayed focused. Thomasville scored a touchdown against us early, so we knew the offense had to keep pushing and keep scoring. We did, and I think that’s the night we started rolling.”

Rosado returned to action in Week 5. That helped.

It also helped that Green became a surprisingly good leader.

“He’s matured a lot in the last year,” Hinson said. “He plays with some really good intensity. He plays with a little bit of violence, and that’s a good thing.”

JyMikaah Wells’ 1000-yard season and Mike Geter’s 35 touchdowns (rushing and passing) indicate that Salisbury’s offensive line has been up to the challenge. They aren’t as awesome as Salisbury’s ridiculously strong defensive line, but no one is calling Green and his pals a weak link anymore.

“We played a team (North Forsyth) last week that was doing a lot of different things, but we handled it by working together,” Green said.

Green couldn’t single out a best game for himself or for the offensive line, but that’s not a negative.  It just means there have been a lot of stellar efforts.

They’ve gone 1-0 for 10 straight weeks. They’ll be at home on Friday for a second-round playoff game against Bunker Hill (10-1).