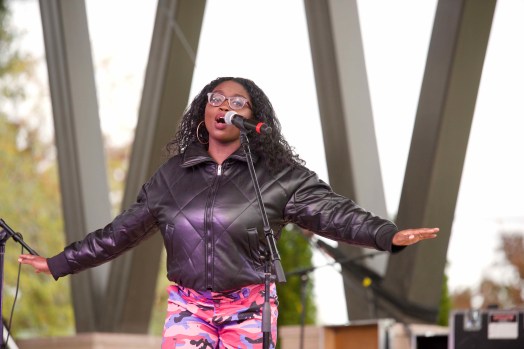 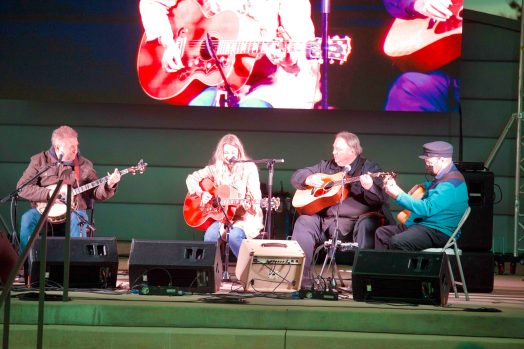 SALISBURY — With fall in full swing, Bell Tower Green Park on Saturday christened its stage with the first outdoor concert.

The headliner for the evening was the Kruger Brothers. The band, led by brothers Jens and Uwe Kruger, are North Carolina icons despite originally hailing from Switzerland. The band is associated with North Carolina bluegrass icons such as Doc Watson and are frequent players at Merlefest, which attracts tens of thousands of attendees and is named in honor of Watson’s son.

Salisbury’s Saturday show opened and closed with local artists — Salisbury’s Destiny Stone to start and Mt. Ulla resident Sydney Lett to end. Lett performed a few songs with the Kruger Brothers between sets. She said it was an honor to play with the band.

David Whisenant was master of ceremonies. The would-be first performance for Bell Tower Green — Pops at the Post — was postponed and then canceled because of rising COVID-19 cases.

While on stage, Jens Kruger told the crowd cities dream of having a park like Bell Tower Green.

Attendee Lyndsay Mullis said she loves the park. Mullis hadn’t visited before Saturday. She lives in Salisbury and has driven by the park before. Mullis said she came out to the event because she saw an article about the show on social media.

Haley Mastranunzio, another attendee, said the park brings people together and it is nice to have an outdoor music venue in town.

Bell Tower Green, Inc. Vice President Jason Walser said it was hard for him to put into words how happy he was during the show.

“Despite it being cold and a little bit cloudy, I see lots of smiles on lots of faces from lots of different kinds of people, and it just makes me happy,” Walser said. “It exceeds my expectations.”

Walser said the park has met all his expectations and he regularly hears stories from people about time they are spending in it.

Walser said he’s been surprised by how quickly people found the park and made it part of their daily routines. It quickly went from a construction zone to a place with kids playing, eating lunch in the park or meeting friends for coffee.

On Saturday, there also were vendors with beer and food. New Sarum Brewing and Morgan Ridge Railwalk Brewing had brews on hand. Mean Mug had a food truck on site.

“I can see nothing but amazing things for this whole area, for people to fellowship and to give businesses like us opportunity to be part of the fellowship,” Baudoin said. “All good things.”

Baudoin said the park is what the growing community needed, and it provides another place for young families to enjoy.