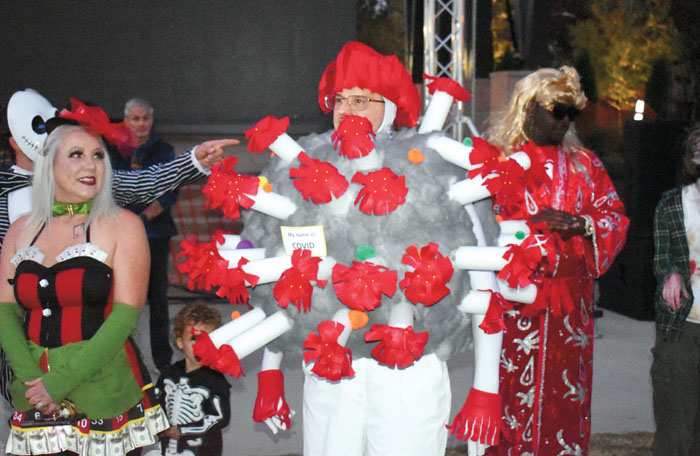 The COVID-19 costume claimed the "scariest" prize for adults as crowds turned out for Halloween. Ben Stansell/Salisbury Post

“I knew people were going to come out because it’s the first time since COVID that everybody is getting to trick-or-treat like that. It was pretty cool.”

“The parties have agreed to resolve their contractual dispute in the lawsuit.”

—  Ellis Hankins, attorney representing former Landis Town Manager Roger Hosey in offering the only description of a settlement in Hosey’s lawsuit against the town

“We need more than just the taxes we get from our residents and that’s what we’ve got right now trying to keep afloat with that. We need an industrial base.”

—  Charles Seaford, China Grove mayor in announcing the potential for a facility that would create 1,000 jobs and a $400 million investment

“I know I’m very fortunate to be here. I enjoy the work I do and I enjoy working with all of you and all of the city staff.”

—  Graham Corriher, city attorney for Salisbury after he was given a salary increase

“People were very energized about what their candidate stood for or had done.”

“You always want to win, but it’s not that big a deal.”

—  Mike Brinkley, who lost to Brittany Barnhardt  in the race for Granite Quarry mayor

“Every move I make at school is a learning opportunity.”

—  Melvin Stewart, Livingstone education major who is teaching at Koontz Elementary as the first apprentice  in a partnership with Rowan-Salisbury Schools

“Surviving and advancing is part of any playoff run and tonight epitomizes that fact.”

“It was an act of somebody who didn’t want to look at what they’d done.”

—  Marsha Goodenow, assistant district attorney telling the jury that Juan Renardo Chunn was
responsible for killing his father before the younger Chunn was found guilty of first degree murder