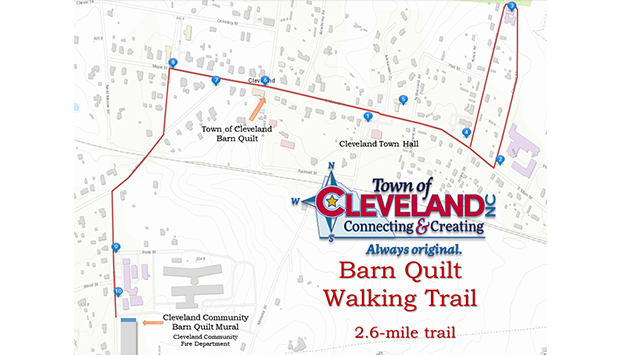 A map of the Cleveland Barn Quilty Walking Trail that will be unveiled this weekend.

CLEVELAND — Rowan County is looking to take back the title of being home to the largest barn quilt mural in style.

In 2019, West Rowan Home and Garden in Mt. Ulla became the home to the largest barn quilt mural in the country at 504 square feet. Since then, the ever-expanding popularity of the barn side motifs has produced larger murals elsewhere.

Elsie Bennett, a West Rowan entrepreneur and one of the minds behind the original mural, is now working with Cleveland to bring the largest barn quilt back to West Rowan at the town’s new fire department facility.

“The ladies that worked on this wanted to go bigger and create another mural,” Bennett said.

This time around, the quilt will be about 1,000 square feet and made up of more than 160 pieces. Most of the mural will be individually crafted squares. They are all hand painted by people in the community. There will be squares recognizing first responders and military service members as well as squares that represent families.

“There are so many beautiful patterns,” Bennett said.

Bennett gave one example of a woman memorializing her grandson through a quilt in the mural so he can still be a part of the community. She said there is no way to calculate the number of hours that have been invested in the project during the previous two years. Progress on the project slowed after the COVID-19 pandemic began. Bennett said the organizers did not want to put people at risk and a lot of older people wanted to paint squares. So, they stopped the quilt-painting classes for the mural.

Eventually, the classes were able to restart, but there were other challenges as well. The pandemic has lead to material shortages and cost hikes. Shaver Wood Products stepped in to provide materials to finish the project and A.W. and Sons Construction offered to mount the piece.

The mural is only one piece of a big day on Saturday for the town of Cleveland. The unveiling will coincide with the town’s annual pecan festival and its new 2.6-mile walking trail. The trail has a barn quilt tie-in as well. It will be marked by barn quilt cubes, painted and designed by the same group behind the mural. There will be 60 quilts in total on the cubes dotting the path. One end of the trail will be at the Cleveland Fire Department.

An letter from Mayor Pat Phifer pointed to the results of a survey conducted in 2019 that put the town on a path to improve its connectivity and rejuvenate itself by embracing the small town feel.

The reveal will begin at 10 a.m. on Saturday, followed by a community walk on the trail, a chili cook off and a bluegrass jam.