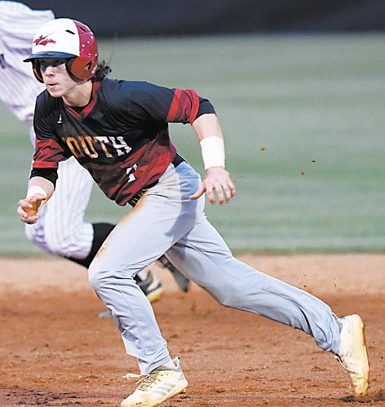 LANDIS — South Rowan senior and East Carolina baseball commit Nathan Chrismon knows what’s ahead of him, but he’s never backed down from a challenge.

ECU has put together another banner recruiting class to go with the two that came before it. Last spring, the Pirates were good, winning a regional in Greenville before losing in a Super Regional at Vanderbilt. The Pirates have 25 players coming back from a 44-17 team.

Omaha and the College World Series isn’t a dream for ECU — it’s a realistic goal.

Fifteen high school players in the Class of 2022 have committed to ECU. When Chrismon committed in late July, he was the fifth shortstop to commit to the program. Some of those shortstops will become second basemen, third basemen or outfielders in Greenville.

“Nathan was recruited as an athlete, and he’ll go to East Carolina as prepared as any high school player can be,” said Empsy Thompson, one of Chrismon’s coaches with the South Charlotte Panthers showcase team. “He’ll be ahead of a lot of freshmen because of the experiences he’s had with the Panthers. He’s faced a lot of Division I arms. He’s played with talented teammates. He’s played second base for the Panthers with a third baseman who’s going to Louisville and a shortstop who’s going to N.C. State. Sometimes he’s moved to the outfield because that’s where we needed him. One of the things you learn with the Panthers is accepting a role.”

At South, Chrismon has been special since he was a varsity starter as a freshman. His role for the Raiders has been pesky offensive catalyst, aggressive base runner and smooth shortstop.

Like every other baseball player in the class of 2022, he’s had his high school career drastically reduced. His sophomore season was silenced by the pandemic after five games.

His junior baseball season was limited to 18 games, but was still outstanding. He hit .340 with a .549 on-base percentage, scored 24 runs and stole 12 bases for a 14-4 team. He made the 2A all-state squad chosen by the North Carolina Baseball Coaches Association, as did two of his teammates, center fielder Kane Kepley (Liberty) and second baseman Ty Hubbard (uncommitted). Those three also won gold medals as members of the championship team in the state games.

With his high school career limited, Chrismon was recruited mostly because of the speed and glove he’s shown with the South Charlotte Panthers.

“The Panthers are an amazing program and they really have done a lot for me,” Chrismon said. “They kick-started the recruiting process for me and then they helped me finish it.”

Chrismon grew up in a UNC household. His mother (South Rowan AD Angie Deal Chrismon) and father (South head baseball coach Thad Chrismon) are UNC graduates. Thad was a record-setting closer for the Tar Heels.  Nathan’s older brother, Austin, is a recent college graduate and was a member of the UNC football team.

Not that there was any pressure to steer Nathan toward Chapel Hill.

“I was always open to the best fit and my parents were always supportive of me finding that fit,” Nathan said. “I have no doubt that East Carolina is the best place for me.”

East Carolina, a school where South Rowan graduate Eric Tyler starred after making a transition from catcher to third baseman, was among the first schools to actively recruit Chrismon and was the most dedicated and persistent. It was the program that took the time to build a rapport with him.

Chrismon committed after a visit to Greenville with his family.

“We did worry some that missing the 2020 season might hurt him, but then Nathan got opportunities to go to some places,” Coach Chrismon said. “He’d never been to ECU until we visited there. I know he had pretty high expectations, but then the school and the baseball program far exceeded those expectations. The whole experience blew him out of the water. I’m thrilled for him. ECU checks all the boxes. It’s a great program with a style of play that suits him.”

East Carolina head coach Cliff Godwin makes his campus rounds at the wheel of a six-passenger golf cart — “Cliff’s Cab,” they call it — and he gave the Chrismons a personal guided tour.

“We got to spend a few hours with Coach Godwin, walking and riding, and I got a really good feeling about not only the baseball program, but the whole environment at ECU,” Nathan said. “When we took a little bathroom break, I told my dad, ‘This is it. This is the place.'”

It’s never easy, never routine, but the Chrismons have made it a relatively smooth operation.

“I guess having your dad as your coach your whole life can be a blessing and a curse, but there have been few ups and downs and I’ve always looked at it as something positive,” Nathan said. “My dad is a coach who knows how to make guys better, and that’s the main thing. I know how much he’s helped me and all my teammates. At practice, he’s Coach Chrismon and at home he’s Dad. It’s as simple as that.”

Nathan has also benefited from having an older brother, who was part of a big-time athletic program.

“Austin has helped me tremendously as far as the weight room and he’s always been there to answer all my questions” Nathan said.

Nathan also has played football for South — his wheels made him an exciting, scrambling quarterback — and he played  basketball as a junior, but he will focus on baseball as a senior.

This spring will bring an extremely important season for South’s program, which has the talent to make a run at championships, even in a loaded South Piedmont Conference.

“I do miss football, especially Friday nights, and it’s kind of hard to sit and watch it,” Nathan said. “I also really enjoyed playing basketball because basketball challenged me in some different ways as an athlete. Every sport challenges you differently. But I wanted to have a senior baseball season without distractions. I wanted to be at the fall workouts with my teammates. I wanted to play the fall season with the South Charlotte Panthers and finish up strong with that group of teammates.”

Chrismon has made an impact over the years, not just with teammates, but with coaches.

Brett Stirewalt, who is now at West Wilkes High, was an assistant coach at South last season.

“Nathan is one of those kids that always soaked up all the baseball knowledge he could and he always challenged me to coach him hard, to make him better,” Stirewalt said. “He’s a leader and not just by actions. He’s more vocal than you might think. He holds his teammates to a high standard, holds them accountable, and he holds himself to that same high standard. He’s a reason South Rowan baseball has been so good.”

Chrismon hasn’t ruled out coaching as a future career, but he can also see himself getting into the business side of sports down the road. ECU offers 135 different majors, so he’s got some options and some time to figure out what he wants to do after his baseball career is in the books.

“He’s been a very pleasant kid to coach and he’s an exceptional player,” Thompson said. ” Whatever he needs to do to get on the field for ECU, he’ll do it.”