Halfway through campaign, Rowan County United way at 44% of goal 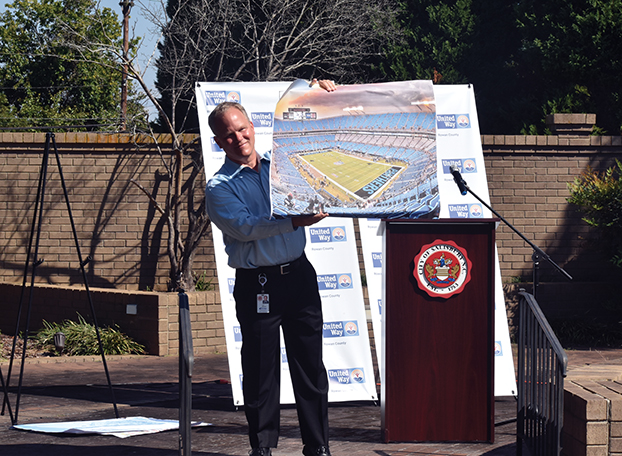 Behmer, chair of this year’s fundraising campaign, held up a picture of Bank of America Stadium. Home to the Carolina Panthers on Sundays and musical acts at other times during the year, the Charlotte stadium has a capacity of 75,412.

The fundraising journey kicked off last month at Bell Tower Green. United Way held its second report meeting on Wednesday in the courtyard of the Salisbury-Rowan Utilities Administration Building. Behmer is director of the utility and has crafted the campaign’s slogan “Let it come. Let it go. Let it flow.” around his connection to water.

During the report meeting, Behmer said that the organization has raised $665,615, or 44.4% of its goal, as the campaign reaches its halfway mark.

The United Way has implemented several virtual fundraising tactics since the pandemic started, but raising money as COVID-19 continues to be a factor is challenging.

“The campaign cabinet is having to do extra work to have smaller meetings,” Behmer said. “There’s a lot of competition for time. Some companies still are virtual. It’s not always the best way to share information, but we’re just trying to do our best to get the information to everybody so they can make their own determination on where they give.”

The campaign is split into about a dozen different divisions, each focused on fundraising from a certain sector of the community. The division closest to its goal is special gifts, which is led by Elizabeth Cook and raised $158,377, 79.2% of its $200,000 target. The commercial No. 2 division, led by Rowan County Board of Commissioners Vice Chair Jim Greene, is close behind, having raised $48,517, 77.5% of its $62,610 goal. Four other divisions were also over 50% to their individual targets as of Wednesday.

Other division leaders gave optimistic outlooks for the rest of their campaign, promising to increase their percentage in the coming weeks as they continue to reach more potential donors.

The United Way’s campaign might get an unexpected boost from a young entrepreneur. In coordination with Families First, 7-year-old Layla Jones will host a lemonade stand fundraiser on Saturday from 12-3 p.m.in the parking lot behind the former Wells Fargo building at 130 S. Main St. in Salisbury. The building is now owned by Greg Alcorn, who intends to open a co-op marketplace on the ground floor. Families First occupies space on the second floor. All proceeds from the lemonade sale will benefit Rowan County United Way, which has partnered with Families First for the past 25 years.

Each individual who gives to the United Way during the campaign is entered into a contest to win a new car from one of the organization’s automotive partners. At each report meeting, three names are drawn out of a bucket to be included in the final drawing at the campaign finale on Nov. 19.

The three names drawn at the campaign kickoff last month were Michael DeCoster with Power Curbers, Robert Hartsell with the Rowan County Sheriff’s Office and Vanessa Villanueva with Dillard’s. The three people added to the list of possible winners on Wednesday were Kathy Peeler and Suzannah Callahan, both with Rowan-Salisbury Schools, as well as Jason Holt with F&M Bank.

The next United Way report meeting is scheduled for Oct. 27 at noon at Gerry Wood Honda. More information about the campaign can be found online at rowanunitedway.org.