‘Every life is absolutely worth it’: United Way shines light on suicide awareness, mental health during walk 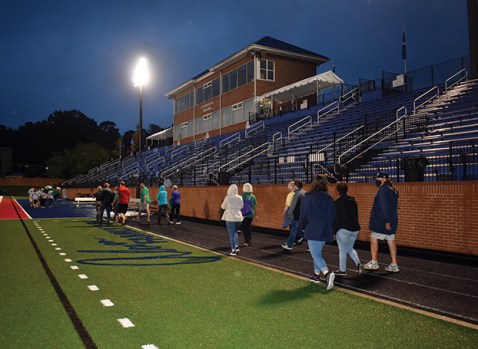 About 90 people participated in the Into The Light Walk early on Saturday morning. The walk is held by the Rowan County United Way to bring awareness to suicide and mental health. Ben Stansell/Salisbury Post 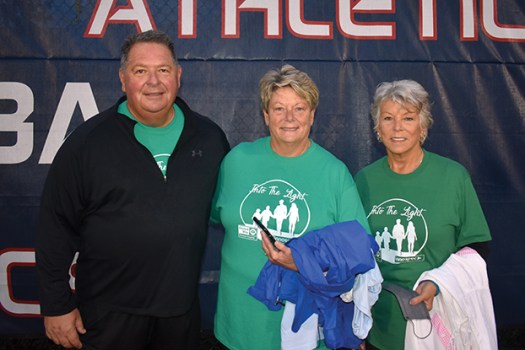 Rick Izze, Tammie Izze and Brenda Bost stand together at the Into The Light Walk. Tammie participates in the walk every year for the son she lost to suicide about three years ago. Ben Stansell/Salisbury Post 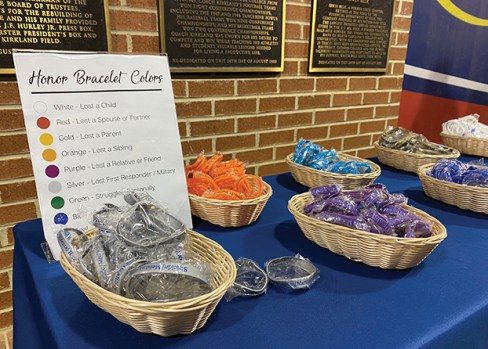 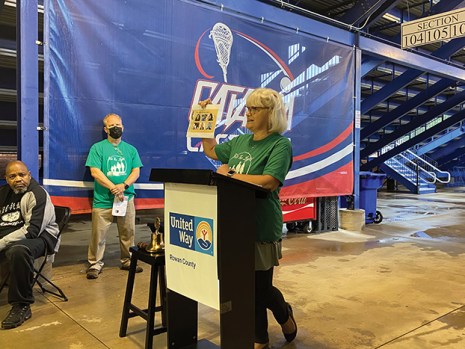 Dr. Cathy Lingle utilizes a picture to illustrate her point that the stigma around mental health and suicide are harmful. Lingle was one of several speakers who delved into the topics during the Into The Light Walk on Saturday morning. Ben Stansell/Salisbury Post

SALISBURY — Walking with her husband and sister under a drizzly early morning sky, there was no doubt why Tammie Izze woke up before the sun Saturday and circled the track at Catawba College’s Shuford Stadium.

“For him,” Izze started, “For him — just wanting him to see that I still love him even though he did what he did.”

Three years ago, Izze’s 26-year old son Chase Adkins died by suicide hours after being arrested for possessing an amount of drugs that might not have even resulted in a prison sentence.

For the third consecutive year, Izze was among dozens of participants who partook in the Rowan County United Way’s Into The Light Walk. The event brings together family and friends of people who have taken their own life and encourages increased awareness and communication around mental health and suicide.

“Every year, we do this event it looks different, but the message is always the same,” said United Way Executive Director Jenny Lee. “No matter what venue we’re at, no matter what track or street we’re walking down, we always have the same message and that is every life is absolutely worth it.”

It wasn’t easy for Izze to participate in the walk three years ago when she was still reeling from the loss of her son. Gripped with grief, Izze formed a comforting connection with another walker who’d also lost their child to suicide.

“Their mother and I cried a lot together that day, but it was a good experience in the end,” Izze said. “You find that, in a small town like this, that there are more people than you think that are suffering and hurting with the same problem you have and that’s the loss of a loved one to suicide.”

The Into The Light Walk was previously held in downtown Salisbury. The original idea was to symbolize bringing suicide and mental health out of the dark by stepping toward the rising sun. Although rainy weather didn’t allow for a sparkling sunrise Saturday, the event was just as poignant and important as always.

“We didn’t literally walk into the light today because of the rain and the clouds, but we’re still here walking into the light by letting people know help is available,” said David Whisenant, who closed the event with a call to action. “You can stop somebody else’s pain.”

Before the walk got underway, participants congregated under the Shuford Stadium bleachers to pick up one of several color-coded wristbands, each color symbolized a personal connection to suicide.

After a few minutes of mingling, participants strolled onto the rain-soaked football field as Rowan County United Way Campaign Chair Jim Behmer struck a golden bell 18 times. The first 17 rings symbolized each individual who took their own life in Rowan County in 2019. The 18th was to provide support for those left behind from the suicide.

The goal, Lee said, is to ring the bell less and less as the years go on.

Participants completed two laps on the track at their own pace, walking in groups as the sky began to lighten before returning to the stadium concourse to listen to several information and inspiring speakers.

The first year the walk was held, the event showcased speakers who had lost a loved one to suicide. The second year, the focus shifted to those who had a personal connection to someone or had themselves attempted suicide, but did not complete the act.

“This year was all about medical help, whether it’s group sessions, individual counseling, medication or just being open enough to go to your family and loved ones and say, ‘I am struggling’ and your family saying, ‘I know where you can get help,’” Lee said.

The program started with Raeyven Hobbs gifting Rowan County United Way a donation of $1,000. Raeyven is the sister of Tristen Hobbs, a Mooresville teen who died by suicide several years ago. Tristen’s family has attended the Into The Light Walk each year and hosts the T-Man 5K to promote suicide awareness. This year’s 5K was held in Mooresville on Saturday morning after Into The Light.

All of the proceeds raised from Into The Light, including the donation from the Hobbs family, will go toward funding Rowan County United Way’s five community investment partners who address mental health in the local community.

Atrium Health’s Dr. Dawn Caviness spoke Saturday about the resources available through the hospital’s system and the North Carolina Agromedicine Institute. Caviness also delivered a moving story about her own father’s struggles with mental health, which were tied with his childhood trauma and the pressures that came with being a community-focused veterinarian.

“What the farmers and the pet owners did not know was that my dad, who always helped everyone else, had struggles of his own,” Caviness said. “My dad had his own silent battle. He had bipolar, and many, many days, not every day, but many, many days he was in a deep, dark depression.”

By discussing her own father’s mental health, Caviness encouraged others to seek help through one of several avenues available to them through the Agromedicine Institute.

“But only by talking about it, acknowledging depression and anxiety are real and affecting our farming families can we begin to take one step toward the light,” Caviness said.

More information about the Agromedicine Institute can be found online at www.ncagromedicine.org or by calling 252-744-1008.

Dr. Cathy Lingle from the Salisbury VA was next to speak, using her time to analyze and break down the “awful” stigma associated with mental health.

“Often people avoid or delay seeking that treatment because of being treated differently, fears of losing their jobs, livelihood,” Lingle said. “Prejudice, discrimination against people with mental illness is still very much a problem in 2021. The stigma against people with mental illness can be subtle or it can be obvious, but no matter the magnitude it can lead to harm.”

Lingle specifically pointed to the media as being a culprit in furthering the harmful stigma. To drive home her point, Lingle held up the infamous picture of Jack Nicholson’s face smiling through a splintered door in Stanley Kubrick’s “The Shining.”

“Media representation of people with mental illness can often influence perception of the stigma,” Lingle said. “They often have a negative, inaccurate and promote the violent representation.”

In addition to calling for those in attendance to help defeat the stigma by educating others and using correct language when discussing mental health, Lingle listed off several resources, including the National Alliance on Mental Illness (www.nami.org) and the National Prevention Hotline at 1-800-273-8255. Lingle asked veterans with mental illness to visit the Salisbury VA.

Following Lingle was a speech from Richard McDonald, clinical director at One Love Community Services. Located at 723 West Innes St., One Love is a mental and health and substance abuse clinic that works with depression, anxiety and suicidal behavior.

McDonald spoke about his own experiences using drugs to mask depression as a teenager growing up in the Bronx. McDonald encouraged parents to understand and not downplay the issues facing their children as they figure out their identities.

“We have to keep a lookout for the kids,” McDonald said.

More information about One Love can be found online at www.oneloverowan.org or by calling 980-330-7000.

“We all come to these events with our own history, our own stories,” Harris said. “For me one of the reason I’m so passionate about addressing mental health and suicide is because my grandfather completed suicide four years ago now and it’s something I still struggle with. It’s why I want to help build resiliency in other people. Because if we can’t talk about it, one nobody else knows and it builds that stigma and two, it helps us connect better with other people.”

A list of Rowan County United Way’s mental health-focused community partners can be found at rowanunitedway.org.