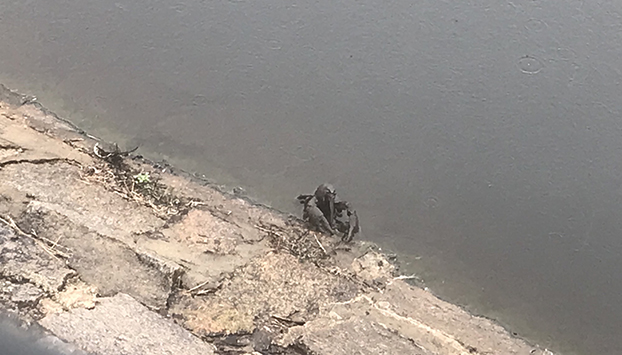 Photo submitted- This reader submitted photo appears to show a crawfish near a concrete barrier at City Park Lake.

SALISBURY — Crawfish have surfaced along the banks of the lake at City Park.

A reader asked about whether the city stocked City Park Lake with the lobster-like critters after noticing them catching some sun around noon on a concrete area adjacent to Annadale Drive.

Crawfish or crayfish are crustaceans that resemble small lobsters and usually measure around 3 inches. The color depends on the species, but they’re usually red or gray in color.

Michael Hanna, Public Works administrative services manager for the city of Salisbury, told the Post crawfish naturally surface in waters throughout the United States and are often found in and around surface waters in Salisbury. He believes they either migrated from a neighboring stream or buried themselves during the construction of the park and re-emerged after construction ceased.

While some crawfish burrow up to 15 feet deep in muddy wetlands, most average no more than 3 feet deep. They primarily feed on nearby vegetation, but their diet also includes worms, snails, tadpoles and other small living or dead creatures.

Hanna said the city wouldn’t need to remove the crawfish.

“They are a natural part of the ecosystem and co-exist with the other fish and aquatic life in the lake,” Hanna said.

City Park Lake measures a little more than 2 acres and was first built in June 1936. In 2019, the city began dredging 8,900 cubic yards of sludge from the lake. Its average depth is now 6.5 feet deep, but it’s as deep as 9 feet near the dam.

The lake is usually stocked with various forms of trout. Public Works Director Craig Powers told the Post the city stocked the lake with 2,000 fish in September, which included 1,400 bluegill (also called bream or perch) and 600 redear sunfish. It anticipates stocking the lake with largemouth bass in the spring.

The North Carolina Wildlife Commission estimates at least 40 different species of this common freshwater crustacean live in streams, ponds and lakes across the state. Additionally, some species are specific to certain areas, including the Greensboro burrowing crayfish only found in the Greensboro area.

Crawfish can be used as fishing bait, while larger crawfish, including the red swamp crayfish, are considered a delicacy of Cajun cooking. The NCWC, however, advises against releasing crawfish into North Carolina waterways as some non-native species have been introduced, resulting in some damage to the natural ecosystems.

‘Every life is absolutely worth it’: United Way shines…