Corey LaJoie’s Kickball Klassic brings athletes, entertainers together for a good cause 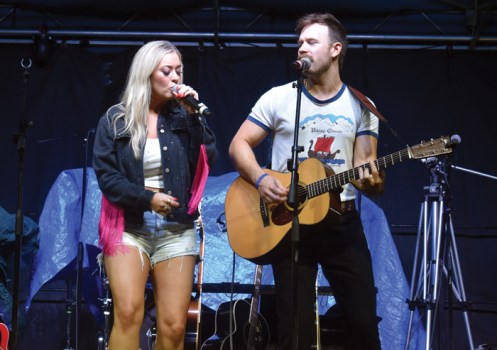 The husband and wife musical duo Katelyn and Derek Drye performed after the on-field action wrapped up at the Corey LaJoie Kickball Klassic. Ben Stansell/Salisbury Post 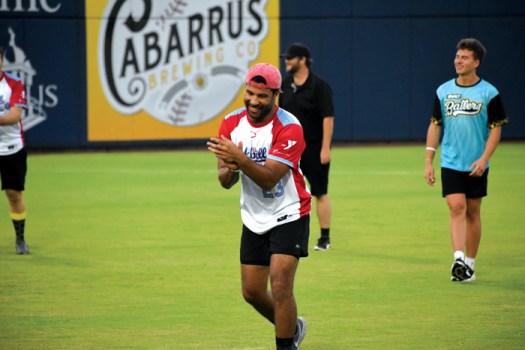 Bubba Wallace, just a few days removed from winning a historical race at Talladega, pitched most of the game for one of the celebrity teams in the Corey LaJoie Kickball Klassic. Ben Stansell/Salisbury Post 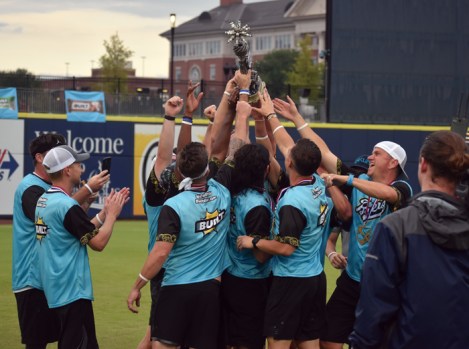 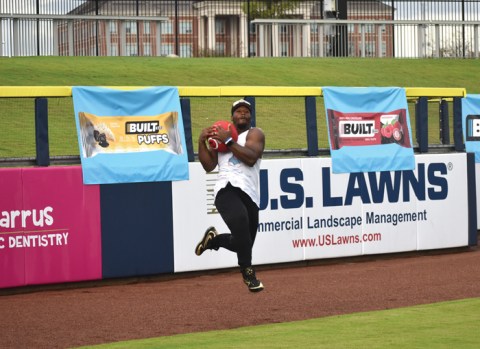 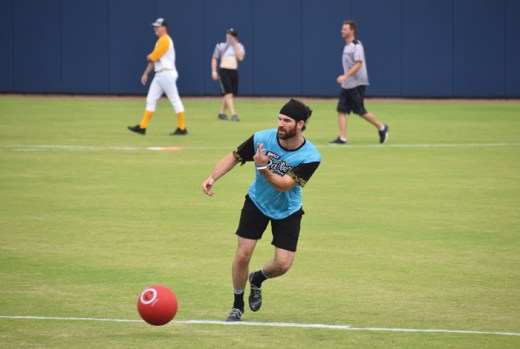 Corey LaJoie throws a pitch during the inaugural Kickball Klassic tournament. The proceeds from the tournament went to benefit the Kannapolis YMCA and Samaritan's Feet. Ben Stansell/Salisbury Post

KANNAPOLIS — Some of NASCAR’s top drivers competed Wednesday night, but it wasn’t on the racetrack.

More than a dozen of the sport’s biggest names gathered at Atrium Health Ballpark to partake in the inaugural Corey LaJoie Kickball Klassic. The daylong tournament wasn’t just for kicks, it was a fundraiser for the Kannapolis YMCA and Samaritan’s Feet — two nonprofits close to LaJoie’s heart.

The tournament had a competitive bracket featuring 16 teams, a championship game and an all-celebrity game bout. There were also musical performances by The Dryes and Pryor and Lee on a stage set up at first base.

The Kickball Klassic included more than NASCAR drivers. There were former NFL stars, an all-time college softball player, stand up comedian, country musicians and even one of ESPN’s most recognizable personalities. The tournament had all the features of a major sporting event, including a rain delay. The field was saturated with heavy showers in the afternoon, but the skies cleared long enough for the final game of the competitive bracket and for the celebrity showdown.

LaJoie, a graduate of Northwest Cabarrus High School, said the tournament exceeded even his wildest expectations.

“It was just a perfect day” LaJoie said.

Kickball has been a passion of LaJoie’s for years, and his love for the schoolyard sport was on display during the tournament. LaJoie’s Built Bar-sponsored team marched through three games of pool play in the early afternoon, past their semifinal opponent and into the championship game in the evening.

A team sponsored by Circle B Diecast and composed mainly of Kannapolis firefighters and police officers gave LaJoie’s squad some of its toughest competition. Kannapolis police officer Keith Benfield said he was thrilled to play in the tournament.

“It’s not something you get to partake in everyday. So, it’s definitely so far in my life a once in a lifetime experience,” Benfield said.

Coleman was a menace on the mound and Stewart made a bevy of acrobatic plays in the outfield.

After the competitive play wrapped up, celebrities took the diamond in front of a crowd gathered along the left field line.

Wallace, only a few days removed from a historic victory at Talladega, led the Red Team to a 3-1 victory with a strong pitching performance.

The game was just for charity, but the ultra-competitive athletes and entertainers generated their fair share of intense action. Along with a few close calls at the plate, players got into light-hearted and entertaining debates with the umpires.

Many of the drivers who participated in LaJoie’s Kickball Klassic will be face off again in a more familiar setting at The Bank of America Roval 400 at Charlotte Motor Speedway on Sunday.

Once the on-field excitement was over, the celebrity competitors signed autographs for droves of fans who lined the Atrium Health Ballpark concourse. Some fans came for the kickball, but more were there to get signatures from their favorite drivers. Racing enthusiasts decked out in NASCAR gear got drivers to sign just about anything you could put a pen on — from notebooks and posters to metal fenders and flags.

Ted Barnes drove a little over an hour from Chester, South Carolina, to get several replica cars signed. Barnes was there with a other fellow NASCAR lovers who have traveled together to races and autograph opportunities. The group got to the tournament as soon as the gates opened at noon and relaxed in lawn chairs near the autograph tables.

“To get to do this again is a breath of fresh air,” Barnes said. “I’ve done this so long it’s a part of my life.”

Barnes said it was his first visit to Kannapolis since Atrium Health Ballpark was built and the downtown was brought back to life with restaurants and stores.

Most of the money raised during LaJoie’s Kickball Klassic will go to the Kannapolis YMCA. Branch Executive Philip Belfield said the successful tournament was a culmination of all the right factors.

“You’re used to the typical auctions or golf tournaments and those kinds of things,” Belfield said. “To be able to offer a celebrity kickball tournament obviously is lots of fun, but I think it was almost meant to be with the location here at Atrium Health Ballpark, the horseshoe to be able to have fields adjacent to the stadium here, taking advantage of all of the work being done in Kannapolis and also being in the backyard of NASCAR.”

Although Belfield said he wasn’t sure exactly how much money was raised during the tournament, he was confident it was one of the largest fundraisers for the YMCA in many years. It was also, Belfied said, a somewhat surreal experience.

“To see this many VIP celebrities in one location — NASCAR drivers, comedians, ESPN analysts — all together is pretty cool,” Belfield said. “It kind of drives home the point of good things happening here in Kannapolis.”